In a secluded part of Brooklyn, detached from the rest of the world, there lies a hidden street you have never been down. You’ve never even noticed it. If you dare to venture down, you will find the cultural oasis of your dreams. As you walk through the dark, you wonder if you’re headed the right way. You stop to listen. You don’t hear anything. It’s eerily quiet. You walk a little further. You still can’t hear it but for some reason you can feel it. You’re participating in a sacred ritual that many before you have experienced, yet none in a place quite like this .

At the end of the road is a gate protecting an expansive land of sound and color from everyday grime and grit. Inside lies a door leading to a concrete forest of glowing marvels. For a special moment in time, separate yourself from the rest of the world, and walk directly into the light.

This event will take place on Saturday October 27th, 2012 run by one of our more favorable upcoming event producers in the area Unicorn Meat NYC. The event will feature Heavy Weight’s in the scene such as: FreQ Nasty, David Starfire, Random Rab, Govinda and Dulce Vita to name a few. This time around there are no door tickets, it’s 21+ and the location will be e-mailed to ticket buyers upon the day of the event,. When it comes down to these type of events I can’t stress enough how much the age factor and exclusivity make a huge difference. We at Lost In Sound are very pleased to be attending Unicorn Meat NYC’s “Illuminate” as their last event “Return to the Bubble Kingdom” was stacked with a bunch of very talented act’s.

rjd2 originally began his career in Columbus, Ohio, DJing in 1993 with a pair of turntables bought from a friend. He went to high school at Fort Hayes Metropolitan Education Center and graduated in 1994. He claims his name originates from another friend who referenced him as “rjd2” in his raps, and the name stuck. The innovative producer’s 10-year career reached a marked turning point in 2009 after he scored “A Beautiful Mine,” the popular theme to the hit AMC television series, Mad Men. In early 2010, he dropped The Colossus – the first album to be released on his own label, RJ’s Electrical Connections. He has since reissuedYour Face Or Your Knee Caps, The Horror, and Since We Last Spoke as well as a vinyl LP deluxe box set entitled 2002-2010 via his label. 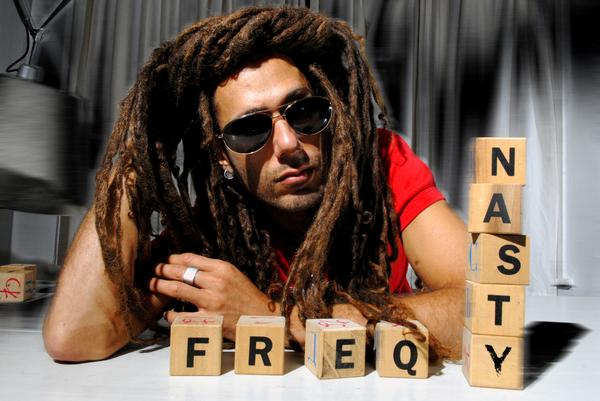 Born in Fiji, raised in New Zealand and forged in the dance music revolution of London in 90’s London, FreQ Nasty started his career in 1998 on the seminal UK label Botchit & Scarper, moving to SKINT Records in 2003. He went on to release a slew of cutting-edge records, collaborating with and remixing a diverse range of artists including Fatboy Slim, Kelis, KRS One, Roots Manuva, Rodney P, Bassnectar, and Reggae legend Junior Delgado. In 2008, he released “Creator”, his crossover hit collaboration with MIA producer Switch and NYC hipster Santogold, and the ground breaking FABRICLIVE42 mix CD, which was picked as DJ Magazine’s compilation of the month.

His sound is very tribal, derived from African and Middle-Eastern traditions, samples and instruments. It takes you on a tour of worlds that no longer exist and creates vibrant auditory images; you are zoomed back by digital tricklings and beats that swoop in and make thousand-year-old lullabies bang.

“My intention is to raise the global vibration through the music and live experience that Govinda creates.” – Shane Madden (aka Govinda)

Govinda is the alter-ego of Austin based electronic music producer and violinist Shane Madden. Govinda began his lifelong musical journey at the age of eight, when he began playing classical violin. Later, while studying at the prestigious University of Texas School of Music, he cultivated a deep passion for electronic music. Govinda has crafted a unique marriage of violin styles from across the globe; overlaid with ethereal synths, sensual bass, haunting female vocals and hypnotic rhythms. The result is a complex, spiritual tapestry that some have termed “Gypsy-Dubtronica.”

See you all on the dance floor!!