Lost in Sound has chronicled Ott since the beginning of our site. Over the years, our larger community has grown to love the cheery Brit who produces some of the best psy-dub around. Appropriately enough, Ott got his start by dubbing Simon Posford‘s goa-trance project, Hallucinogen. Since then, Ott has teamed up with Twisted Records & Posford himself on many different ventures, projects, and releases (Ott’s albums were released on Twisted until his most recent album, Mir, which came out on his own label, Ottsonic Music).

As the electronic movement grows in America, it’s becoming clear that although we love it, as Ott noted himself, we aren’t as conditioned to DJ performances as other parts of the world. “I’ve spent a lot of time in the States the last few years… and it’s just obvious, to take a band out there. Because there’s such a scene of people that like going out to see bands. And it’s just a way of amplifying the fun. ‘Cuz it’s fun on your own, but much more fun with a gang of your mates!” And he’s done exactly that! Enlisting a couple of old bandmates from his teens, with Chris Barker on bass and Matt White on drums, in addition to the talented vocalist Naked Nick, who also plays guitar. 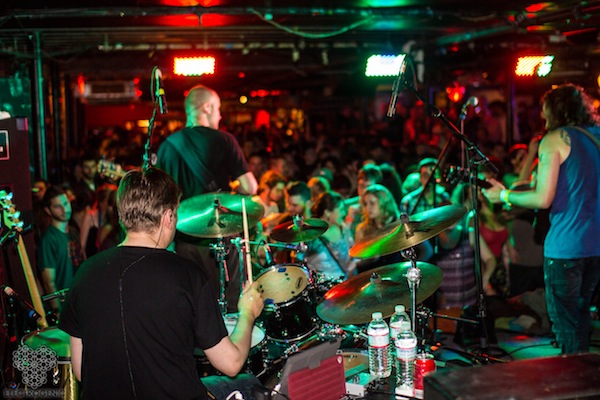 The first stop of LiS’ tour plans with Ott was October 5, at the Middle East in Cambridge, MA. I arrived on a terribly empty stomach, but as I entered the doubledoors of the downstairs floor I instantly bolted towards the front row to get down with the rest of the crowd, remembering that Bill-Kwan the Chef was onstage flipping pancakes (chocolate chip pancakes, might I add) as Supersillyus got the already packed crowd going strong with his unique brand of experimental electronic music. Note to self: when growling hunger is instantly satiated by the act playing on stage, you’re in for a good night. 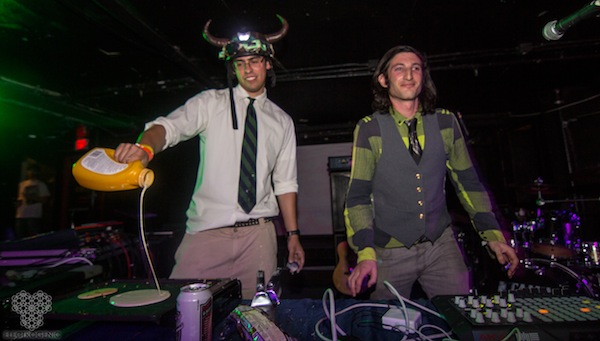 As the room filled to near capacity, Supersillyus’ playful, worldly IDM gave way to Govinda‘s sultry yoga womp. This man has the masculine-feminine balance down to a tee with his heavy bass music, interlaid with meditative violin playing. Although I’ve been fortunate enough to see Govinda play quite a few times now, he never disappoints, and was a great choice to keep the crowd amping up for Ott & The All-Seeing I. 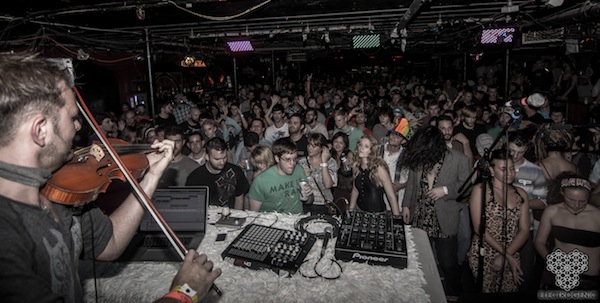 There aren’t many artists that will still inspire me to fight a gang of sweaty dinosaurs for a spot front and center, but Ott managed to do it with ease. As one of the first producers that really caught my ear wayyy back when, I can probably attribute most of my love for psychedelic dub music to my original affinity for Ott. Needless to say, I was really looking forward to the Ott live band experience. Coupled with the hype I had been hearing after the NYC show, I had a gut feeling I was in for something special.

The band was tight, on point with every note. Unexpectedly, the guitarist is a badass vocalist as well. To hear Ott’s produced vocal harmonies and subtle, yet blissful chants matched with a live voice was certainly a pleasant surprise. As they cycled through old favorites and newer tracks off Mir, I accumulated but one complaint – The All-Seeing I sounded too good, too much like Ott’s studio work. Perhaps this was their intention, or perhaps the human element will creep its way into their performance more over time. In some way I was anticipating renditions of Ott’s studio tracks that reflected improvisation and live performance a little more (a la Bonobo or Trentemøller‘s live band projects) but this is not to say I wasn’t tremendously impressed with the performance. As I recollected my thoughts again and again, from between moments of awe and obnoxious rude bwoy stomp dance steps, it dawned on me that Ott & The All-Seeing I had just graced me with one of the best shows I’d seen in 2012 to date. ~IntuiSean

Next up for us was Saturday, October 13th in Boulder, CO. Ott came into Colorado and the buzz almost felt like Cheese or Tribe was in town. Although there was quite a bit of competition that Saturday night for live music, The All-Seeing I clearly brought out the best of crowds (by headliner time, if it wasn’t sold out, it was damn close). And with no Denver date on this run, it wasn’t a big deal for travelers like myself to skip the second night of Sonic Blossom (a Sonic Bloom festival fall classic at Cervantes) and make the trip to the Boulder Theater. Boulder or Denver, I can attest to the excitement that filled the air the entire week prior, which was in part due to the trickles of praise that had spread from the East Coast attendees, no doubt.

Flowing through songs from all of his releases, the tracklist felt acutely like any other Ott show. Clearly what set this show apart was the involvement of the other 3 live members. Not as dramatic and member-heavy as Shpongle Live band, but the end result is close to the same. Twisted Records family know how to put a warming, outstretched, psychedelic smile on the faces of all their fans, which beautifully enough seems to touch the listeners all the way to the inner workings of the soul.

The Boulder show saw Human Agency as the first opener, which is a quickly growing trio from Denver. With live drums and another guy on vinyl decks, these guys make Colorado beats just as good as anybody. People slowly started filling the venue towards the second half of their set, but a quick set break lent just the right amount of time for the crowd to build to a more proper level for Govinda. For anybody that was by the right speaker and couldn’t handle the loud popping & crackling coming from it with every bass hit, I can attest that this was not Govinda’s problem of amatuer red lining. In fact the sound board hardly seemed to pay attention to me when I alerted him to the problem, but it also didn’t sound as apparently terrible in the middle.

Luckily the problem didn’t persist for Ott & The All-Seeing I. The group took the stage with a powerful intro, which the crowd instantly bobbed in unison to the “rasta skat” like dub groove. Immediately it felt magical and the entire theater was filled with cheerful souls, outstretched smiles, and dancing feet!

After a blur of a show that saw plenty of bangers to slow jam ratio, one track that sticks out in my mind that I wasn’t expecting to hear was “Joyful Wonder.” Released in 2003 on Twisted Records’ Backroom Beats 2 this song played perfectly into the persona of this band. A majority of people know this recognizable track from Ott’s Live in Gnomelandia set. Another crowd favorite was “Aubergine of the Sun,” and then obviously the adventurous and dubby fan favorites of “Owl Stretching Time” and “Squirrel and Biscuits.” ~Dizzurt

200 lbs of bananas and a hippy stick of the sticky stuff, the clouds of…