Progressive psybass producer Resonant Language has released the Nautiloid EP, with downloads directly benefitting the Coral Reef Alliance. The Denver-based artist most recently shared the stage with Kalya Scintilla on his Back to the Roots tour while also performing at Shamanic Boom, Pirate Party, and Infrasound festivals.

Teaming up with Aquatic Collective for the release, proceeds from Nautiloid EP will support the conservation of one of our planet’s most beautiful kingdoms: coral reefs. Drawing inspiration from his 2017 travels snorkeling in waters around Thai islands, Resonant Language’s EP is part of the surge in the psychedelic bass genre lending to new musical possibilities as vast as the sea. As described on the artists bandcamp: 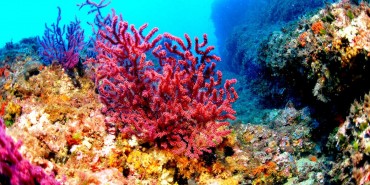 Coral reefs contain a quarter of all marine life on Earth. They are oases of biodiversity – hotspots of activity, bursting with prismatic colors and strange creatures. Pygmy sea horses, sea urchins, clown fish, and sea stars are just a few of the many characters that create a vibrant scene evocative of an underwater, psychedelic, multi-level Manhattan. Coral reef ecosystems serve as spawning, breeding, and feeding grounds for the many species that call the oceans their home. Far from a “drop in the ocean,” ill effects from coral reefs affect the overall health of sea ecosystems worldwide, and coastal communities and the global fishing industry rely on healthy fish populations. The endangerment of coral reefs stems from a combination of rising water temperatures, volatile weather patterns, overfishing, pollution, waste plastics, nutrient loading, sedimentation from coastal development, coral and species collection for lime sale and the aquarium industry, tourism, and destructive boating practices (blast fishing, poisoning, nets & fishing traps) to the point where one of the world’s most biodiverse reefs, in Indonesia, has fallen below 10% of its pristine state.

While we cannot undo the devastating loss of coral reef biodiversity from a myriad of human impacts, we have the potential to mitigate our harmful effects going forward. All proceeds from EP downloads will go to the Coral Reef Alliance. The Coral Reef Alliance is working to be part of the solution for the study, protection, and monitoring of coral reefs. They take a multi-pronged approach to identifying conservation priorities, and has worked in Bali, Hawaii, Fiji, Honduras, Guatemala, and Indonesia. Utilizing strategies that leverage science and new research, and identifying effective policies and solutions to benefit nearby reefs, their work to help protect and restore ecosystem health ranges from establishing dive fees, partnering with local governments to regulate fishing and diving as well as conducting patrols, and looking at broader scientific solutions for healthy fisheries, clean water, and intact reef ecosystems.

This three track EP from Resonant Language is the third Aquatic Collective charity release. Last December the massive Standing with the Waters album, which supported the water protectors at Standing Rock, raised proceeds for the Standing Rock Medic and Healer Council. Check out other Aquatic Collective releases HERE, which include a benefit album for MAPS and songs from over 60 artist contributors.

You can download Resonant Language’s Nautiloid EP and make a donation to the Coral Reef Alliance here:

Tutu application for Android can be downloaded from this page, however before doing as such…