“The coldest part of the night is the darkest part, which is right before sunrise.”

As I was being bombarded with download after effing download (what do I look like, some kind of super-computer?) while plunging through a shape-shifting amoeba of self-proclaimed gods/goddesses with only a rubber calamari finger to guide me through the mayhem, I found myself in a bit of a quandary at this so-called Oregon Eclipse Gathering thingy. And for some odd reason I was being compelled to sing karaoke super-hits with no prior forewarning whatsoever! Maybe because leading up to my arrival, for quite some time I’d been feeling forlorn and helpless, mixed in with sprinkles of despair. On top of everything else, I’d been seriously reconsidering my relationship status with this “conscious-minded” filthy festival culture I had time and again shamelessly rassled with in the pleasure bushes. Should we take our steamy heavy petting a step further or had the time come to finally part ways? Were we ultimately just “Islands in the Stream” or would this forbidden fornication evolve into a “Total Eclipse of the Heart?” What more could I be doing with my life these days to better humanity? And how the golly heck does Mercury in Retrograde and J-Rod exercise videos factor into all of this? It was just tooooooooo much, I tell ya!

Well, ya see, lately it seems like too many of us have been standing on the sidelines. Dwellers on the threshold. Realizing we’d all been had by a raving man-child who’d flown off the rails and/or missed his nappy-poo. Watching the country burn, twist and turn. And not a hunka hunka burnin’ love either. Then I show up to this supposed freedom sanctuary, with its sparkly chakras, kundalini sequins and lord knows what else. Feeling in the grand scheme of things as if the whole scene just might be all dressed up and nowhere to go. I mean c’mon people, how do we fight racial injustice with permaculture? How useful is a “degree” in the flow arts in combating climate change? If I enter a compost shitter with baby wipes in my pocket, but the sign says, “DO NOT USE BABY WIPES,” then what the hell am I supposed to do with these goddamn baby wipes?!?! 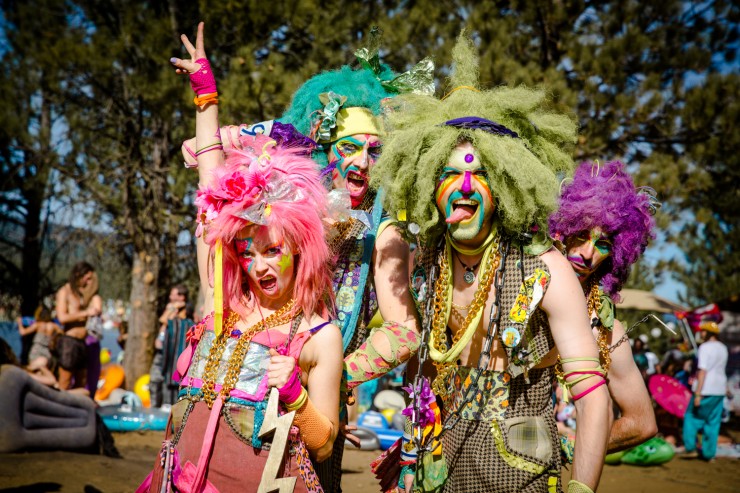 On that note, I took it upon myself to speak with an assortment of rather curious looking characters who’d huddled onto this Big Summit Home on the Prairie business. I was soon hit with a variety fun pack of explanations for what this collective “entity” was supposed to possibly represent. From serving as a scalable model for a breakaway civilization to being a Chinese fire drill, where festival peoples were faced with certain “harsh” circumstances (16 hour entrance lines/an outbreak of wild meth-addict Kevlar bears?) that might mimic a partial collapse in society should the proverbial poo ever collide with a motorized fan. Help me Rhonda. Help, help me Rhonda! Nevertheless, these ultra wacky scenarios only came off as sheer hunky-dory speculation floating somewhere off in the flimsical future. Look people, I needed something much more tangible to rub all over my body right this very second! Speaking of exposed bodies, I figured it was an appropriate time to mingle with the festival homies down by the good ole lap o’ luxury lake. Let’s take a hot minute to gauge the pulse of things by asking his gal how she feels about the country sliding down the ole poop shoot…

Me: “Excuse me, what are your thoughts on this raucous grab-ass celebration taking place while the country just might be burning?”

“What the hell you talkin’ about?”

Apparently being black is considered a crime and 26 million people were dang near kicked off their health insurance. Don’t you feel a just tad bit guilty being here?

“None of that stuff matters right now!”

“Listen, why you gotta be steppin’ on my bliss today son? WUT!”

“What are you, my fuckin’ nanny?!?! GO HOME POINTDEXTER!” 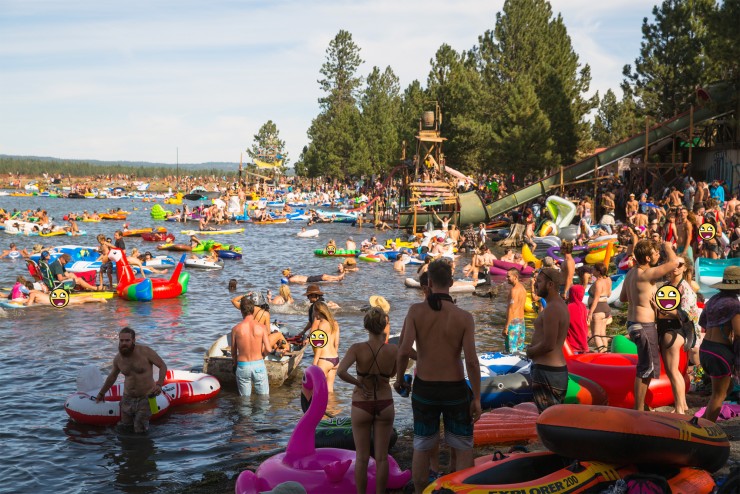 Gee whiz, she must be sooooooo activated! Authentic interactions are just the best, aren’t they?! Well anywho, word on the street was something “celestially” semi-important would be happening on Monday morning. Based on scribble I’d jotted onto a $200 roll of beige water teepee, either one of two events would be unfolding – “Buy 1, get 1.618 off your next happy-go-lucky scarf” at the Sacred Fractal Hut or some peckerwood named “Tipper” would be defiling a Bar Mitzvah at the Moon Stage during totality. True effing story. Although I had no idea what the hell a “totality” was supposed to be, I figured there was a well-lubricated explanation located somewhere in this never-ending festival Encyclopedia Britannica guide I constantly found myself getting entangled in. Surely there was a cryptic message embedded within the elaborate military time grid. Which got me thinkin’ again. Look, commandeering inflatable farm animals in an algae laden lagoon while engaging in Bocce ball drinking games couldn’t possibly equip me with the kind of vengeful militancy I’m gonna need to fight “the man” in the streets. If we were to have any chance at taking on Kevlar Care Bears or Donnie boy and his fellow orangutan play-time cronies for that matter, shouldn’t the inhabitants of this makeshift utopian paradise start assembling an arsenal of fine-crafted knives and pirate swords to assist in our strategery? If nothing else, how ‘bout a set of brand new rough ‘n’ tumbly amethyst finger claws? With that said, I attempted to consult with a scantily clad fellow who I’d noticed wandering about in the commons area. He was a squirrely lookin’ barefoot specimen flingin’ about a small pink electrical flag with an undomesticated twinkle in his eye. He looked as if he knew things. You know – “things.” No, not those things, the other ones! However, I soon discovered I was getting more than I’d bargained for… 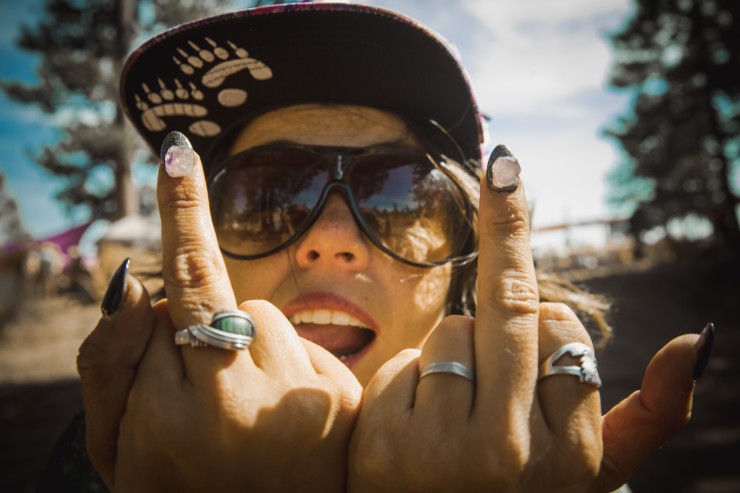 Me: “Excuse me good sir, what might you be able to share with me about acquiring the necessary weapons within this here village which could aid my quest in joining the Resistance?”

After posing my question, the odd gentleman came up within inches of my face, waving the pink flag maniacally back and forth (I bet that flag could really fuck some shit up).

“Did you know I’ve been inducted into a high Wiccan priest 3 times over? I know what Warlocks do.”

“I’m an old druid…Red Oak. I’m not a psychic or a medium, BUT I FUX WITH INFINITY. Have you heard of Judaism?”

“Well, they’re from Mars…Do you know what a Baklava is?”

“Yes, I enjoy bathing in it from time to time…”

“It’s a spaceship… A triangle. The thing that causes so much electrical dis-frequency. Baklava is on another plane, sitting at the bottom of the ocean – from Judaism. They came here and interrupted our Atlantean being. You can imagine a 56 year-old man consciousness colliding on this Earth with a 6 year-old woman consciousness…”

At that crucial juncture I decided to pull the ripcord on this bizarre esoteric word salad exchange and dip out as gracefully I knew best. Some motherfuckin’ Kenny & Dolly…

Oh boy, you should’ve seen the twinkle in his eye after that one! Right as I hit that furious high note, a roving “Funn” wagon came cruising down the boulder infested electric avenue at just the perfect time! One whose sole purpose in life was to shoot nothing but fuckloads upon fuckloads of bubbles right into everyone’s filthy faces!

“Bubbles! Bubbbbbbbbbbles! Yaaaaaaaaaay! I fux with you bubbles! I FUX WITH YOU!”

When I was down

I was your clown!

Right from the start

I gave you my heart! 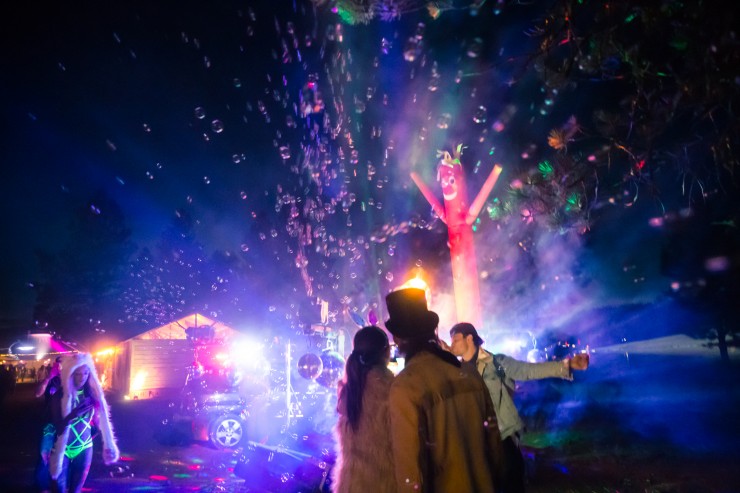 So where was I? Oh yeah, while mean ole white supremacist big shots with tiki torches pillage town squares, Net Neutrality flails away by the wayside and uranium companies try to set up swinger clubs in the Grand Canyon, shouldn’t this conscious-minded-whatever-the-heck start focusing on becoming more of a – dare I say – unified movement? Is this “community” even capable of such a concentrated effort? Jesus – Something? ANYTHING?! Or is this whole thing just some grandiose form of disjointed, wishful thinking? (I mean, c’mon, have you taken in a game of bingo at the Fringe Theater lately? Hmmmmmm?) On that note, I spoke with Erik Davis, former center fielder for the Cincinnati Reds and author of Techgnosis: Myth, Magic and Mysticism in the Age of Information after he gave a fascinating talk called “REALITY AIN’T WHAT IT USED TO BE.” I huuuuuuuurd that. Hey E-Dizzle, what’dya say?

I don’t see it as a unified movement… It doesn’t mean that this can’t be more of an activist situation or racial consciousness raising or participation in cities. But it’s not clear to me what the tactical significance of this world can be, which in some ways is consumerist, is escapist, is hedonistic…What exactly does it do, except make for a better party or maybe attract people who would otherwise get into something else? ‘Hey, come over to this side, it’s more fun!’ 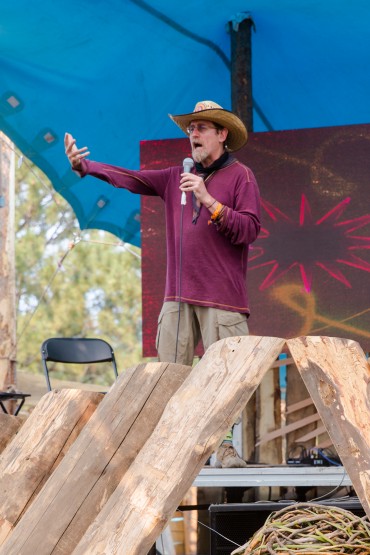 Well god damn it, Erik Davis! You were supposed to make me feel all fuzzy inside about my deep-seated guilt for partaking in this “transformational” shit-show jamboree. And to think I’d finally found the voice of reason who’d lay out in super duper clear terms how this mega-party might morph into a thriving vessel within the revolution! One day into the festival and my skeptical suspicions had already been proven. Show’s over, everyone! Surely the case was closed! Might as well go back to watching Dancing with the Stars while lathering pesticide-flavored popcorn across my delicate body!

But hey, while we’re here in Oregon, does anyone wanna wrestle totally nude in an oversized mud pit, debate the merits of psytrance and/or chase fuckloads of bubbles with no end in sight? Oh geeez, don’t ya just love steppin’ on people’s bliss?

So don’t go breakin’ my

Special Thanks to Lovemore Creations

In Asheville, North Carolina, weird comes standard. A city of about 90,000 residents, Asheville is…