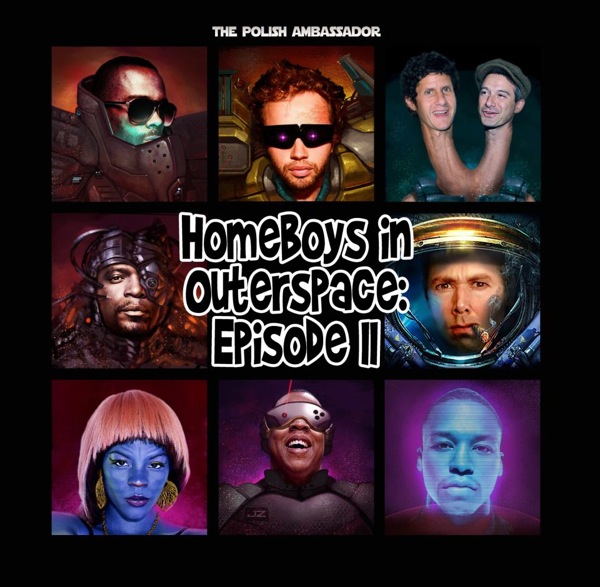 Just around this time last year The Polish Ambassador, AKA David Sugalski, whisked me away on a much needed metaphysical vacation with his 11 track release, Future, Sex, Computers on the legendary 1320 Records. He’s been on my sonic radar all year, making an appearance at the ever beloved Big Up Fest in Ghent, NY, releasing a psychedelic remix of Little Dragon’s “Ritual Union“, and now he’s made a quick pit-stop to earth to share Homeboys in Outerspace: Episode 2.

Released VIA Grassroots California, this is a 5 track remix album that’s got all the components for an otherworldly party. Future, Sex, Computers maintained a heavily abstract down-tempo nature, more resonant with his work under Ample Mammal, while Homeboys: Episode 2 is comprised of hip-hop stems, all drenched in that contorted, glitched-out, futuristic sound that is becoming dubbed as “the Polish Ambassador touch”.

You may already be familiar with his remix of Rye Rye‘s “Bang” which is supported by a funky bassline and layered with sound breaks, distorted vocals and an infectious ass-shaking beat. “Hell Yeah” (Dead Prez) eases in with a slower start, opening the curtains for a celestial dance-floor. It’s tough to strike a balance between dirty, badass and psychedelic, but this is the odd liminal space that Sugalski resides in, truly making his music unparalleled. My favorite track off this album is his remix of “Sure Shot” by the Beastie Boys. This track knocked me with a major wave of nostalgia, definitely reminiscent of the emotions evoked in F,S,C, making it all the more apparent of how much of himself Sugalski injects into each track he produces or reworks.

My prediction is that this slew of remixes will prove popular amongst the younger ears of EDM for their collective hard-hitting and unabashed nature. Seasoned ears will gravitate towards these tracks as well for the complex nuances and calculated manipulation that Sugalski so expertly inlays. I can honestly say that this album was a surprising deviation from past work, but upon further listen, I found Sugalski, in all of his glory, nestled deeply in the core of each track. Shit Ambassador, now where to?

2. The Beastie Boys – Sure Shot (The Polish Ambassador Remix)

4. Jay-Z – Dirt Off Your Shoulder (The Polish Ambassador Remix)

Download the album for FREE on The Polish Ambassador’s site, and be sure to catch him in the extra-terrestrial flesh in a city near you.

[soundcloud url=”https://api.soundcloud.com/playlists/121169305″ params=”auto_play=false&hide_related=false&show_comments=true&show_user=true&show_reposts=false&visual=true” width=”100%” height=”450″ iframe=”true” /] It all started some 14 years ago in…