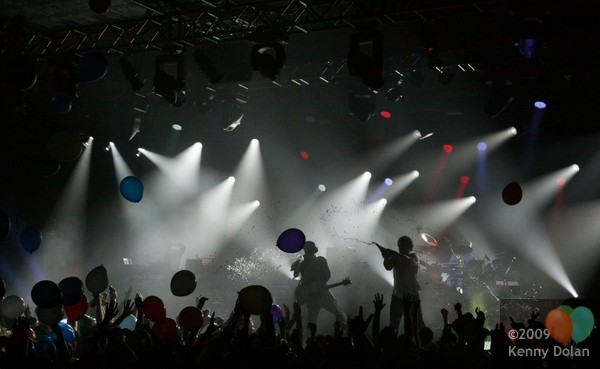 New Years Eve is the final opportunity of the year for bands to rage with their fans and leave a positive lasting impression. In turn, many jamband fans found themselves torn between Phish and The Disco Biscuits for their New Year’s Eve plans. 2009 was a momentous year for both bands, but for many of us there was no debate. The difference is RAGEABILITY. First of all, Phish was to put on a 4 night run whereas The Disco Biscuits were to host a 5 night run that really lasted 6 nights, as there was an intermediary night of performances dedicated to many of their side projects. Additionally, there’s the sizeable fact that New York City is, quite frankly, the place to be for New Years Eve, not Miami unless, of course, you are the members of Phish or Lady GaGa and her crew. To quote Brownie “…playing in Times Square on New Years is super fucking dope!” That said, I could not be more pleased with my decision to spend the end of the decade raging with The Disco Biscuits.

Setlists From Each Night Of The Run

• 12/28: Although there was no Disco Biscuits show at Nokia, a proper review of the run would prove incomplete without mentioning Dub Doctor Conspiracy, a night dedicated to their many side projects at Highline Ballroom. First off, Barber opened the night with his M80 Dubstation side project and showcased a vast improvement in his DJing skills. As soon as he took the stage, it became apparent that he has not only enhanced his personal library, but that he has acquired an acute ear for selecting some of the most banging tracks in the dubstep scene. Dubstep loving Disco Biscuit fans (there are a lot of us) could not have been more pleased to watch Barber’s M80 Dubstation evolve and take on a style of its own. Even Magner was drawn to the stage, almost magnetically, by the energy of the crowd and the force of the unique, and extremely heavy hitting wompage brought to the table. The sound of the two band-mates was something never before heard and was, to say the least, of magnanimous proportions. Conspirator, with Allen on drums, was scheduled to perform next, but Barber didn’t budge from the stage as both Allen and Brownie came out to join the party for a SURPRISE TRACTORBEAM SET; and what a Tractorbeam set it was! My heart truly goes out to those who missed this performance. It was a full-fledged dance party from start to finish and then some. Eventually, Barber left the stage to the unanimous cheers of all that were present and it was time for just Conspirator to play. Many of us were doubtful that Conspirator would be able to follow the Tractorbeam set, but boy were we wrong. Not only did they collectively put on one of the best performances I have ever seen them play, raging straight drum n bass for their entire set, but Allen exhibited what was possibly his most impressive handy-work of the entire run, gradually increasing his energy level as the show progressed. Again, reluctant as I am to reiterate, I feel sorry for all the heads that missed this show. Finally, it was time for Dr. Fameus to perform and Allen did not disappoint. While it wasn’t one of the best Dr. Fameus performances, in all fairness to Allen, that was one heck of a hard act to follow.

• 12/31: [Set I:] M.E.M.P.H.I.S.> Caves of the East> Gangster> Above The Waves> Shem-Rah Boo [Set II:] Mirrors, Astronaut> I-Man> Strobelights and Martinis, Countdown Medley> Basis For A Day, On Time, 7-11> I-Man> Helicopters [Set III:] Down To The Bottom> Naeba> Humuhumunukunukuapua’a> Mr. Don, Spacebirdmatingcall> Down To The Bottom [Encore:] Rockafella

• The Disco Biscuits raged 11 sets playing 65 different songs not including the “Countdown Medley” from New Years Eve. 15 songs: “Strobelights and Martinis,” “Shem-Ra Boo,” “Rock Candy,” “Svenghali,” “Portal To An Empty Head,” “Grass Is Green,” “Minions,” “Little Shimmy In A Conga Line,” “Munchkin Invasion,” “Save The Robots,” “42,” “Spraypaint,” “Run Like Hell,” “I-Man,” and “Down To The Bottom” were completed in 2 parts bringing the grand total to 80 songs played independent of each other.

• During the NYE “Countdown Medley”, 3 songs “Morph Dusseldorf,” “Aceetobee,” and “Vassillios” were played for the first time during the run, while the other 7 were repeated from earlier sets. If one were to count “Morph Dusseldorf,” “Aceetobee,” and “Vassillios” in the grand total of different songs played during the run, the total would be 68 different songs with a grand total of 83 songs played independent of each other.

• The Disco Biscuits covered 3 songs during the run: 12/26: Peter Ilyich Tchaikovsky’s “Dance of the Sugar Plum Fairies” from The Nutcracker, 12/27: Frank Zappa & The Mothers’ “Pygmy Twylyte” from the album Roxy and Elsewhere, 12/30: Pink Floyd’s “Run Like Hell” from the album The Wall.

• 1 song had to be restarted because it was interrupted by the fire alarm: 12/29: “Floes.” When some fan “accidentally” pulled the fire alarm, the music was instantly cut off. However, The Disco Biscuits acted quickly and came to the front of the stage to hang out with their fans. The band handed out free copies of their “Widgets” EP and conversed with their loyal front row ragers. Even though the band was past their time limit to play, they convinced Nokia to stay open in order to make up for the fire alarm buzz-kill. They went on to play for an extra 40 minutes. It is for reasons like this why The Disco Biscuits are loved so deeply by their fans.

• Throughout the run, The Disco Biscuits had 2 guest artists join them on stage: 12/29: when they performed “Flash Mob” with Simon Green of Bonobo and 12/30: performing “Lunar Pursuit” and “Orch Theme” with Jamie Shields of The New Deal.

• The longest time The Disco Biscuits played without stopping was 84 minutes and 39 seconds during the 12/30: “Run Like Hell” sandwich sequence: “Run Like Hell> The Great Abyss> Digital Buddha> Lunar Pursuit> Orch Theme> Run Like Hell.”

• The Disco Biscuits’ owe their 12/30 setlist: – [Set I:] Little Lai> Portal To An Empty Head> Crickets> Crystal Ball [Set II:] Run Like Hell> The Great Abyss> Digital Buddha> Lunar Pursuit> Orch Theme> Run Like Hell [Encore:] Highwire – to one of their fans who posted that exact setlist on Brownie’s Facebook wall prior to the run. It is truly fascinating how social networks have brought bands and fans closer together.

• The Disco Biscuits debuted 1 song during the run, “Portal To An Empty Head,” which they completed in two parts starting on 12/26 and ending on 12/30. While the chorus of “Portal To An Empty Head” is a little too corny and poppy for my taste, the band made it a point to properly rage the song and, as a result, it was very well received by their fans.

Best Song Of The Run

• The best song of the run was the 12/31: 17 minute and 27 seconds “Caves Of The East.” “Caves Of The East” wins best song of the run for its dynamism and ingenuity. Every single band member came together in a perfect harmonious rage that manifested the innovative future sound of The Disco Biscuits. Fans were astonished as each new piece of the song transitioned into what was an even more original and intricate jam than the last. “Caves Of The East” is not mentioned once in the “Each Band Members Top 10 Best Performed Songs” list because each band member raged this song so hard that there is no way of possibly telling who was the most impressive leader and that, in itself, is unbelievably remarkable.

Best Jam Sequences From Each Night Of The Run

The members of The Disco Biscuits absolutely killed it for 6 straight nights and reminded us all, yet again, why they are hands-down our favorite band. The sheer brilliance of their improvisation compounded with perfectly mapped out setlists prove how dedicated The Disco Biscuits are to their passions, the music and the fans. In the words of Brownie: “May the next 15 years be as awesome as the last 15 years.” I’m sure I speak for everyone when I say that I cannot wait to see what 2010 holds in store…

Mayan Holidaze – Day 3: “Is This Not The Coolest Thing Y’all Have Ever Done?”…