A long time ago in a Bisco galaxy far, far away…

It is a period of glow stick warz. Bisco basShips, striking from the 1st annual Camp Bisco festival, have won their first festival victory against the Phish Empire.

During the battle, the rebel Disco Biscuits managed to steal secret plans about the Phish Empire’s ultimate weapon, the TRONCE STAR, an armored bass station with enough power to rage an entire planet.

Pursued by the Phish Empire’s hippie agents, Princess Magner races home aboard the Bisco basShip, custodian of the secret festival plans that can save the Disco Biscuits and restore Tronce to the Bisco galaxy.

When Princess Magner, Barbacca, Brownie Ragewalker, and Sammy3PO founded Camp Bisco in 1999, they were light years ahead of their time. Even though Trey Vader and the Phish Empire are responsible for creating the model for the American music festival, the Disco Biscuits, without a doubt, brought this model to the next level. Like the Phish Empire, the Disco Biscuits realized that their music was building a loyal community instead of just a fan base. In turn, the Biscuits decided not to settle for the undesirable daytime slots other festival promoters were allotting them, and began organizing their own festival. However, due to the nature of the Biscuits’ music, their festival brought together the forces of virtuous daytime jammers and evil late night ragers for the first time.

Like any festival, Camp Bisco has had ups and downs. The festival changed it’s location 3 times, and after the first year in 1999, funds were so low the Biscuits had to wait 2 years until the 2nd annual Camp Bisco. Originally, the festival was held in late August- now taking place in the middle of July. But no matter when the festival is, it seems as if the weather will always include meteor showers. In 2009, it poured from the second the gates opened and didn’t stop until the moment they closed them. This, of course, did not stop the fans from raging- but, to say the least, it put a damper on the weekend (literally). However, festivals like Camp Bisco are defined by their production team’s ability to improve the overall experience- and in 2010, they did just that.

From around 900 attendees in 1999 to 15,000 in 2010, Camp Bisco has evolved into the country’s leading electronic music festival. On July 15, flat brim Ewoks and heady crystal Wookies traveled far and wide, from the Cali galaxy to the New York City sector, to rage this year’s Camp. The line to get in seemed miles long, as Storm Troopers took their time thoroughly searching each and every basShip, but nothing could keep these fans from smiling, knowing that the Biscuits’ first set of the festival was about to begin.

As the Ewoks and Wookies trekked around the campgrounds, they came across an unfamiliar scene. This year, the late night tent was on top of the hill where everyone was camping. The new placement was essential after last year’s downpour turned the late night tent’s floor into quicksand-mush. As fans approached the Main Stage to catch the Biscuits’ first set, they were surprised to see two Main Stages placed side by side; a move that would allow for each act to smoothly and efficiently begin their sets (automatically) on time. The two adjacent stages not only kept the schedule in check, but also rotated the front row crew so that not just one tribe of Ewoks or Wookies would dominate the front row of every show.

The Disco Biscuits started the festival right with a killer first set:

The Biscuits continued their intergalactic ragefest on the second night with what was, in my opinion, the best set of the festival:

That “Spaga” was able to tronce-form both time and space! It is moments in songs like these that remind us all why we keep coming back to Camp Bisco. What made the first set even more epic was the introduction of the COSMIC LAZERS! Of all my years of live music I have never EVER seen a light show like this one (sorry Phish Empire agent Chris Kuroda, but no contest).

Energized from an incredible second night, the Biscuits played what has to be one of their most unforgettable solar sets to date:

Nothing gets a Biscuits fan excited like a revived song, and a well played one at that. The last time the Disco Biscuits played “Pat and Dex” was at Starland Ballroom in 2007! After what seemed like way too much fun in the sun, the inevitable happened… of course, meteor showers. Rain, rain go away come again when it’s NOT CAMP BISCO!
[flashvideo file=”http://lostinsound@lostinsound.org/wp-content/videos/Camp%20Bisco%209/Disco%20Biscuits%20-%204.flv” /]

Sadly, the Biscuits were forced to combine their last two sets into one electrifying rage:

If “Pat and Dex” caught Biscuits fans off guard, then they were probably floored when the Disco Biscuits came out swinging in the rain with the “Knight Rider Theme!” The Biscuits haven’t played the “Knight Rider Theme” since Webster Theater in 2004! As rain relentlessly poured down onto the Ewoks and Wookies, we all soon became Storm Troopers raging to no avail. I mean, isn’t that what the Bisco galaxy is all about? In RAGE we trust! 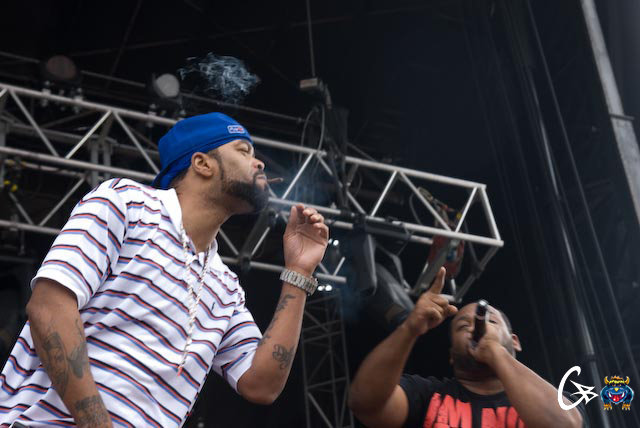 Wu-Tang > USE UR DOME
[flashvideo file=”http://lostinsound@lostinsound.org/wp-content/videos/wutangUSEURDOME.flv” /]

One of the best aspects of Camp Bisco is that all walks of genres are invited to showcase their talent. This is a major factor in why Camp Bisco’s attendance numbers are skyrocketing. If you don’t like Tronce-Fusion then there are still a plethora of genres to choose from (but seriously, how can you not like tronce-fusion? What planet are you from?) The acts that really stepped it up this year were Wu Massacre, Tipper, MiM0SA, and Thievery Corporation. These acts went above and beyond, as they exceeded expectations and added the extra spice that made Camp Bisco 9 all so flavorful. As we look back from our basShips at this past year’s Camp, we can’t help but simultaneously look forward to the festival that we all count down the days to every year. 364 to go…

The Great Abyss
The Tunnel