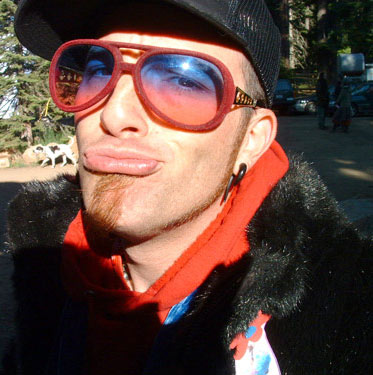 Now that summer is nearly over, it’s time to reflect on all of our recent musical discoveries. Summer 2010 was a great season for music, but one album, in particular, sticks out from the rest. This, of course, is VibeSquad’s most recent album “New Creatures.” Once again, Captain Crunk takes you on a journey inside his whomping basShip to unchartered wobbling planets. With gurgling lazer basslines, extraterrestrial vocoder skills, and, as always, the crunchiest of drumbeats, it’s almost impossible not to be instantly transported to a hydraulic-infused dance floor.

VibeSquad is known to put out albums at a very fast rate. For some artists this could be dangerous, as each album is at risk of sounding like a monotonous extension of the previous one. However, Captain Crunk is no such victim. In fact, “New Creatures” is one of his best albums to date. Each one of the 6 tracks are undeniably fresh, but if I had to pick a favorite it would definitely be “Bunch,” a track that incorporates a tasteful fusion between the Captain’s old style and the industry’s newest innovative techniques. What an absolutely mindblowing track!

VibeSquad’s ability to layer each song with so many intricate noises results in a thick, meaty sound that oozes into your ears like the guts from a squashed cockroach. You know the scene in Jurassic Park where the glass of water begins to vibrate as the T-Rex slowly approaches… well, “New Creatures” has that same effect on your soul.

Aaron Holstein is undeniably a talented artist, and with each album he not only gets better, but also manages to bring a refreshing new flavor to the scene and the industry. There is no question in my mind that when we start throwing parties in outer space, he will be our intergalactic resident DJ. Be sure to check out (and buy) “New Creatures,” as it will launch your mind into sonic galaxies you never knew existed.