One of the best places to listen to music is undoubtedly while driving. Those of us from regions that are lucky enough to see winter weather are quite aware of how amazing the right song can sound while driving down a dark road in the middle of a snow shower. The vibe is perfect for chilled out, textural sound. Adena, the newest release from electronic music producer Tangled Branches, is an album chock full of snow -driving music. Dayton, Ohio native Zachary Hill is the mastermind behind the project, which incorporates a colorful variety of stylistic influences. The music is difinitively relaxing, with a halftime consistency that’s great for letting your mind wander. The diversity within Adena is found in the layers of each track, as flavors of psychedelic funk, trip hop, dub, and even disco weave in and out, taking the listener on a journey through their musical memories.

Check out “Cahokia” from Adena by Tangled Branches

Named after a Native American culture that lived in Ohio 2500 years ago, Adena pays homage to the remarkable feats accomplished by that tribe. Known for constructing massive earth-made monoliths, including a 60 foot conical burial mound that graces the album’s cover, the culture and their accomplishments are credited as a source of peace and inspiration in Hill’s life.

“I chose to have it depicted in the album art to honor my home and the people who used to live here.”

Hill’s goal with Tangled Branches is to create music that serves the listener in some way, be it as inspiration to dance, work, smile, or meditate. 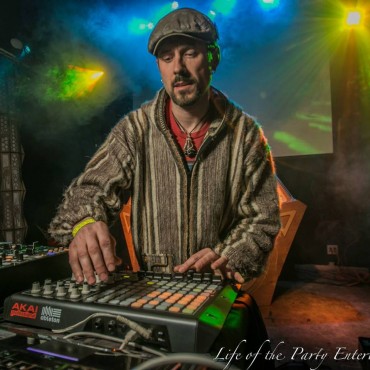 “I want to offer a sound track for good times, and bring comfort to those who are suffering. Music has been such a loyal friend and companion to me over the years. In times of loneliness and struggle, a good song can really make a difference. I want to give that to people, as a gift, as it was given to me by so many hard-working artists.”

Hill also wants to help people who may be hesitant to follow their dreams.

“I want to help inspire (them), to go for it and follow their passion with bravery. There are so many people out there… Putting each other down. I want to be a voice that builds people up!”