On Memorial Day weekend, 15,000 diverse music enthusiasts collectively camp in the sparsely wooded Three Sister’s Park in Chillicothe, IL, to experience a full spectrum of sound that spans an array of genres, classifications, and labels. Summer Camp hosts a sound palette broad enough to connect with almost every culture in America. This allows the festival goer to leave with the intention of seeing their favorite artist, and return to their home state with a greater cultural awareness. A true frequency focused festival, showcasing the music is the objective, with a concept that held true in the future efforts of Jay Goldberg Events & Entertainment, Jam Productions, Umphrey’s McGee, and Moe., when they combined creative forces in 2001 to birth a festival with 1,000 attending the first year. The gathering blossomed into a six stage musical metropolis over the years, providing festival attendees with guaranteed stellar performances from some of the most practiced and polished artists on tour. The talent rich line-up includes: Moe., Umphrey’s McGee, Trey Anastasio Band, STS9, The Avett Brothers, Thievery Corporation, Zeds Dead, Big Gigantic, Yonder Mountain String Band, Everyone Orchestra and Big Boi along with 100 more acts that will make waves in the Midwestern sea of grateful Summer Camper’s.

If you’ve experienced a few festivals of this size, you know all too well that the divine moments of truth are not usually found on the main stages at prime time slots. They are found by making sure you flow through the masses to your favorite artist’s stage, with some room to sink into the moment and meet those surrounding you, to share the experience with, to listen to and gain from. Fortunately, the six stages are always alive and are staggered in a way that enables you to live in the “NOW” and effectively compute the task of experiencing a years’ worth of priceless music in just four days. 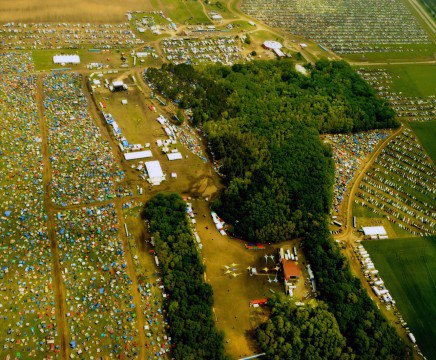 Here are some the performances that can slip under the radar:

Family Groove Company – Take in some local culture with this four piece band from Chicago. They’re known to produce rock based energy that envelopes the listener with soul and funk elements, bringing the crowd together with genuine fun.

SunSqaubi – Hydra-progressive electronifunkadelic rock; a unique sound produced by this four piece band that continually evolves with a growing perspective. Elements of multiple electronic music genres are implemented including tech-house, deep house, dub, electro, and glitch. Their ability to produce deep, emotional future sounds shows promise for both the band and the evolution of live electronic music. Catch this crew in an intimate setting now!

Cherub – This electro-pop duo is here to make you dance. Jordan Kelley and Jason Huber have their hearts set on spreading a thick layer of love on their tracks which translates into a sexy vibe that resonates beautifully with those who crave the hormonal shock waves that keep the party going.

John Brown’s Body – There’s a lot to be said when a band pushes the boundaries of reggae music like this eight piece “future roots” described sound continues to do. They say it all live through their explosive drum and bass and dub reggae fusion foundation that sits below the framework of some of the most beautiful melodies in modern reggae music. Add in a killer three piece horn section, and these guys are clearly something that needs to be felt live.

Savoy – Born in Boulder, CO and based out of Brooklyn, NY, DJ’s Ben Eberdt and Gray Smith and drummer Mike Kelly create an experience that can be described as a high energy dance party and laser spectacular. With the combination of an inimitable live show and original repertoire, the two have climbed their way up to national notoriety as well as established themselves as not only purveyors of one of the best parties around, but as world class songwriters and producers.

Understanding that the act of bringing together large numbers of people is an enormous responsibility, we can show gratitude by respecting the community (festival). We then assume the role of a grateful member of the community. The promotion of conscious thought and action through different programs places Summer Camp in a proactive position. With 15,000 people attending the four day event, there are plenty of moments to share ideals and beliefs. To do so they have set aside a physical space for obtaining social and environmental awareness.

“The ‘Make a Difference’ Area at Summer Camp is a space for collective consciousness. We invite you to come increase your social and environmental awareness by exploring everything the ‘Make a Difference’ Area has to offer. Learn about the work of different nonprofit organizations. Hear inspiring stories of how artists and activists are taking steps towards positive change and getting involved in our workshops. Participate in activities, such as yoga and the Green Raffle. And, relax in the Soulshine Tent to acoustic sets performed by some of your favorite bands. With activities around the clock, the ‘Make a Difference’ Area will provide you with an eye opening, and maybe even transforming, experience.” (SC staff, 2013)

Throughout the day, there’s always an activity to participate in or an opportunity to give back to the community such as yoga, the green team volunteers, hoop classes, painting workshops, and the list goes on. This festival is also family friendly with a kids camp held every day!

Searching for that timeless moment? The music, yourself, strong connectivity with those around you; the realization that you have become one with the experience. Some call it a moment of “awe,” and it’s readily available, but it’s nice to know where to look. The desired moments of bliss are certainly nestled within the late night slots, which at Summer Camp are held in the iconic Red Barn. Igniting the late night hype is Minnesota, Quixotic, and Future Rock on Thursday. Friday’s barn festivities are strung together by the intricate guitar licks and family formed cohesion of the event co-founders Moe., jamming into their 13th year at Summer Camp. To close out the night, an explosion in an icicle factory, Yonder Mountain String Band will give proper purpose to the barn turned icicle factory. Their banjo driven bluegrass shouldn’t be missed. Late night, Saturday is with S.T.S.9 who intentionally produce timeless experiences through progressive, intelligent dance music that synchronously creates a lasting bond for those attending. Following Sound Tribe, are four artists who have the ability to individually make the festival grounds shake: Big Gigantic, Griz, and Gramatik. Griz and Gramatik have teamed up recently performing together as Grizmatik. Dominic Lalli’s sax melodies and Jeremy Salken’s precise and powerful drumming make for a high energy, live electronica storm. The final late night session with Thievery Corporation is destined to be a surge of serotonin, while the two unleash sex inspired beats and liquid female vocals, charging the air with love and sexual energy. Responsible for the pinnacle of energy will probably be Zeds Dead. The pair are known to throw down aggressive sets accented with an edgy style and dark class, molding the crowd into a rager of a party. They consistently push the boundaries of electronic music and shatter genres in the production studio, which is where they are if they aren’t touring.

There’s magic being made with this formula; sprawling farmland with wooded camping, central U.S location, talent packed lineup on six stages, and gracing Chillicothe this year are temperatures ranging from 68-77 degrees, with a slight chance of a dust settling shower Saturday afternoon. There’s a balance to every musically diverse festival, and for Summer Camp 2013 everything in concept is weighted beautifully. The set times are not obtrusive, planning a complex event schedule is an option if you choose that route. It would be effortless at this event to see many artists and great shows by learning from water. Go with the flow, say yes to everything good and if you have an ego, get rid of it. The talent buyer maintained a good ratio of artistic intention from different cultural realms and mentalities; you want to be able to enjoy them all. Quick tips – if you show up early, you will avoid the majority of traffic and get cool shaded campsite, the rules to the festival consist of making conscious actions and proper decisions, stay hydrated and take in plenty of healthy foods. USE YOUR HEAD. May 24-26 is going to be thick with epic memories. Make the most of your time at Summer Camp!

When I first stumbled upon GRiZ‘s new album, Mad Liberation, my preconceived notion was to…