With each passing year, the transformational festival movement grows. The summer of 2013 sees some fresh players on the scene. This is Manifest Festival’s first year in existence, put on by 108 Entertainment, but they’ve already managed to put together a super stacked lineup with two stages (one with a pool!!) boasting BoomBox, The Polish Ambassador, ill.Gates, Love and Light, and many more among the headliners.

Following the same theme as Lucidity, Envision, and Beloved, Manifest promises to be a celebration of co-creation and community, taking place over the summer solstice weekend of June 21-23. This, compounded with a full moon, means that some serious wildness will be going down. Kaminanda, the shaman of dub, will be presiding over the full moon ceremony with his world infused groovy bass that uplifts the soul and taps the chakras.

BoomBox’s funky basslines are deeply influenced by classic rock with a generous helping of psychadelia and funky house. Their sets are always off the cuff and super groovy: perfect for a summer night.

The Polish Ambassador is no stranger to the festival circuit, and his complex, indefinable beats see him floating through glitchy, groovy, dreamy, funky deliciousness.

One of the mainstays in the Bay Area’s bass scene, ill.Gates seems to have no trouble getting the dance floor shaking, whether it’s with his own productions or high energy bass driven remixes of iconic tracks such as Rage Against the Machine’s “Killing in the Name Of.”

Love and Light deliver what their name promises. With rave hearts raised high in pure joy and exuberance, along with their bouncy, whompy beats sets crowds on fire.

Those who lean to the side of live music won’t be disappointed with the likes of the Dead Winter Carpenters, Afromassive, and the Jugtown Pirates performing.

After a night of raging, you can reenergize with a morning yoga session to the sounds of Bob Marley and The Grateful Dead. After some rejuvenating downward dogs, make your way over to one of the various co-creation opportunities, be it finger painting or mandala making. Then head off for a nap in your tent in the shade of the tall trees that the Sierra Nevada is known for.

Manifest is an intimate gathering with ticket sales capped at 2,000. Limited early bird tickets are on sale for $123.

You can visit the Manifest website for additional details. 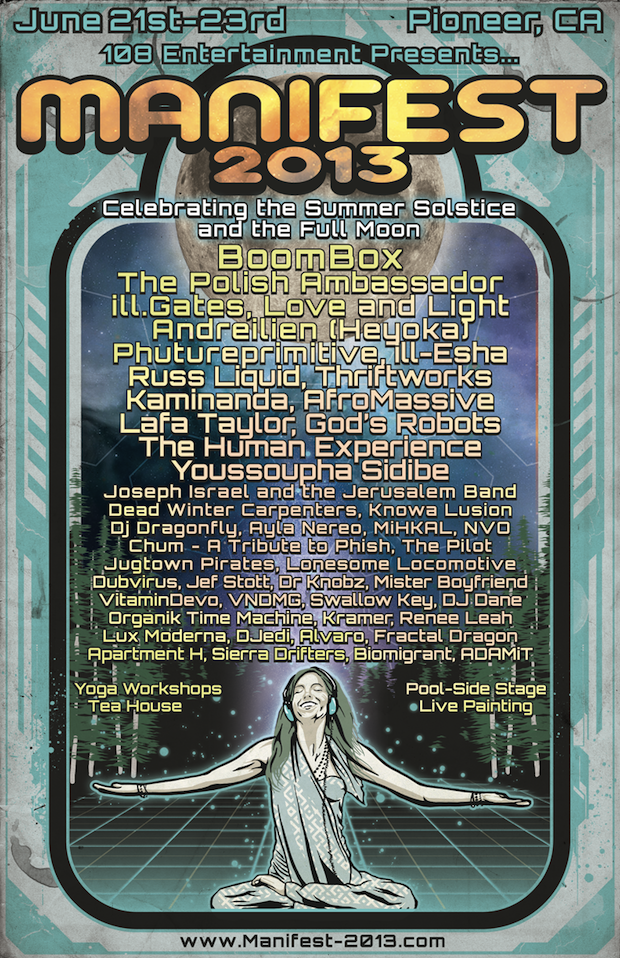