A Pirate, a Squirrel and a Wood Elf are sitting on stools munching on an all you can eat Indian Buffet at the Devil’s Cafe. They wait for a pixie who is to drive them to Regrowth, a forest festival out in the bush of Australia’s New South Wales. After some traffic discrepancies and a mishap resulting in a phone meeting a glass of water, the pixie decides to ditch out on the plan. Fortunately her car doesn’t, and the Pirate grabs the keys and the crew hits the road heading northeast out of bustling Melbourne and into the heart of the Australian bush. Their vessel is loaded with seasoned festival groupies, some having just left a North American tour with much madness in mind. Two are new to the Aussie Bush Doof though. For those wondering right now with a raised eyebrow, “What is a bush doof?”, it’s okay. It takes a bit of an introduction to understand. Bush is the name for the unique and undeniably awe inspiring wilderness that sets Australia apart. Doof is an Australian colloquialism for an all night, electronic thumping, music festival. Wonder where the “doof” came from? What’s the sound the speaker makes all friggin’ night long? Doof doof doof doof doof doof… Drilling deep into your brain and your soul. It’s the sound our heroes hear distantly, inside their very being as they whiz down the highway on the other side of the road in a little ol’ stick shift dubbed Claudette headed for Majors Creek, the closest municipality to the enigmatic event.

Each of these participants has yet to experience Regrowth and, from what they have heard, it’s quite the event indeed. With headliners like DubFX, Spoonbill, Bumble, Whitebear, JPod: The Beat Chef and Griff, it is bound to be a treat with some of the best music Australia and the World has to offer. And if that were all, it would be enough to at least give it a look see. Delightfully, that is not the end to the exposition. Not only does this event host banging tunes, it also has a really good message at the center of its heart. That message is to plant trees. 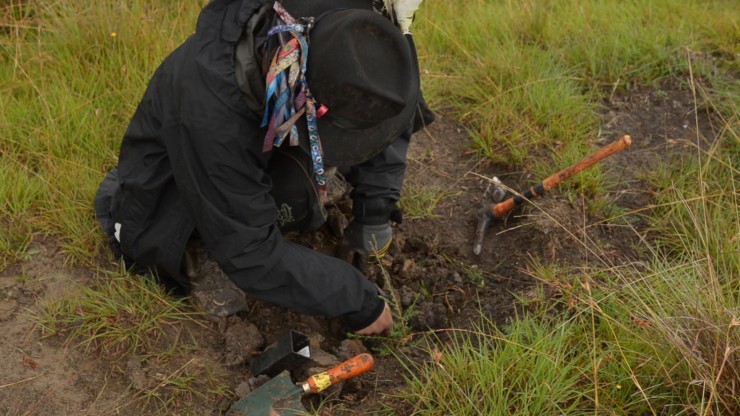 Saving the earth, one tree at a time – Photo: River Easton

Yes, you read that correctly. If you come to this festival, you are encouraged to plant a tree. But why stop at one? Might as well plant a whole bunch! It’s all part of the effort to reforest lands that have been cleared to bring in cattle for the omnivores out there. Nice to have cows but sucks all of those trees had to die during the process. Many trees indigenous to Australia are endangered, and the crew behind this event wants to see that changed. Not only do they want to see it, they are doing it. In the 10 years the event has been running, the event organizers, staff, volunteers and attendees have planted over 53,000 trees. That’s exemplary. In addition the festival is a non-profit event, with the charitable effort devoted to the reforestation project. This is exciting news and why the Squirrel, the Elf and the Pirate are thumping along a dirt road, bottom scraping, giddy to get out there and shake their groove thing for a good cause.

All is quiet on the northeastern front as they roll up to the gate. Fewer cars than expected. Normally there is a big line to get into these gatherings. What gives? The window rolls down and a lovely gate attendant informs us that the entrance is shut.

“Really?! But we want to shake our groove thing,” cries Squirrel defiantly.

“Not to fear my frustrated furry friend,” the gate mistress declares. “’Tis but a small situation. You see, the road has been destroyed.”

“Destroyed?! But how?” questions the Pirate.

Turns out a heavy rain swept through in previous days and turned the single road leading in and out of the festival into a seeping mud pit. It seems our fearless explorers may be forced to hang up on their dreams of getting down and dirty while planting some trees.

“Hush now, don’t cry,” our entrance maiden assures. “We’ve had road crews rebuilding and refilling and it shan’t be long until the way is opened to you and all other patrons.”

With this new data, our intrepid trio kick the clutch into gear and continue the drive deeper into the forest. They round the next bend to find a whole schwack of cars and vans of every type lined up on both sides of the road and into the bush as far as the eye can see. Traffic has been backed up for a while, and the kids are getting antsy. A veritable party has sprung up in the line and people are milling about, conversing, and trying to pretend that they don’t want to be flailing their bodies around like maniacs dripping with ecstatic sweat.

Squirrel and Elf decide that this is a lovely opportunity to show off their pretty arm slinkies, and the Pirate decides to scope out the scene. It turns out these bush doofs attract quite the diverse crowd of freedom lovers. It may be unknown to many, but Australia touts one of the highest ratios of dreadheads to the unconverted (as some dreadies call them). Not only are the dreads out in full force, so are the thrash punks, candy ravers, metal heads, sparkle ponies and funky furries… All of them anxious to get the flow going into the festival.

After a somewhat unsuccessful slinky showcase, Pirate, Squirrel and Elf are too impatient to slink around so they start hiking it in. They schlep their stuff and huff it to the gate. Halfway to the entrance, the road is reopened, the cars start moving again and the trio realizes their hastiness has become their downfall. Now Claudette (the car) is at the back of a very long line into the party. Oh well. C’est la vie. They continue on foot, unperturbed by their predicament. Might as well go dance.

And dance they did. 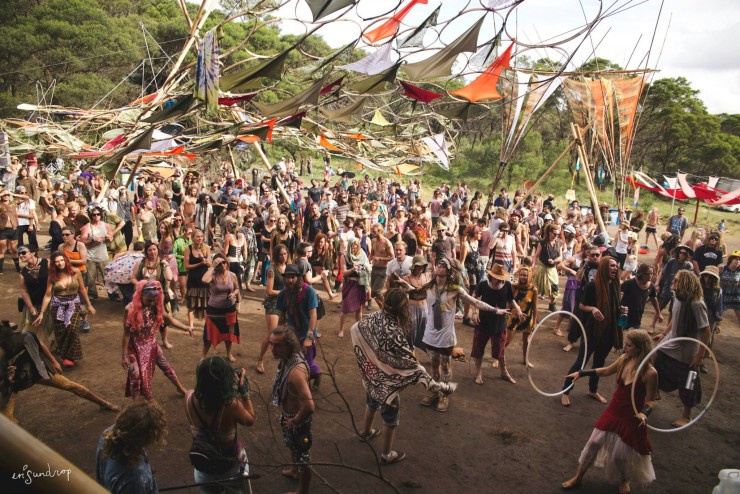 As they arrive on the scene, evening has fallen and Spoonbill is on stage, liquefying people’s brains. Spoonbill is somewhat of a prodigy, having grown up with music in the bush north of Melbourne. His sonic melodies swirl through the doofers and lights them all up. Treetop Stage is going off. 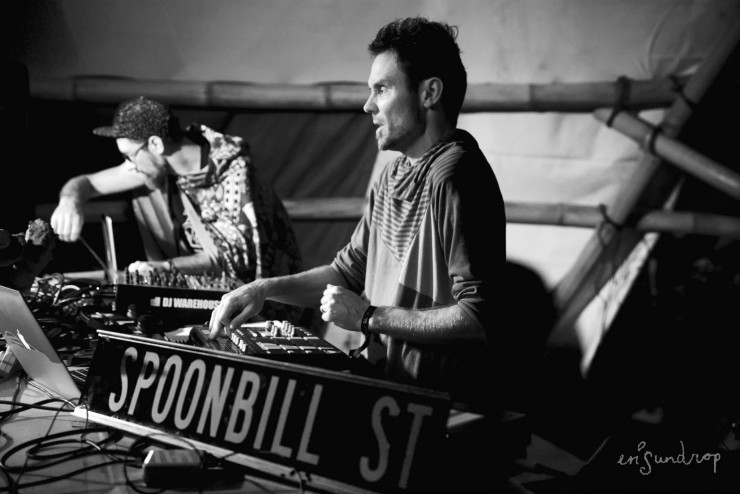 Everyone’s groove thang is shaken up, as JPod The Beat Chef enters the scene and serves up a steamy dish of funky, soulful, slightly tangy, deliciousness. Not only are the beets and carrots being tossed around in a funky aural salad, but JPod is shaking things up himself, dancing up a whirlwind alongside the ever lovely Metamorphograph. The passion for dance bursts through in the music as the crowd surges with ecstatic bliss.

“I wonder if it’s the water here?”, Pirate muttered to himself from his perch. He had indeed slyly found his way backstage and was watching the whole scene from the shadows, observing surges pulse through the masses. JPod drops a phat beat and everybody gets down. Seriously down. Decks switch hands to Andreilien who takes off in the mothership and whisks the tribe away into another dimension.

The lights bedazzle the iris and the beat electrifies the heart. The fairies and nymphs dance together through the trees. Daredevils tug at the heartstrings of a gigantic bird. Slowly spinning and spiraling, sending shock waves through the wings. Glowing balls and shiny staffs swirl and twirl all the way through the night. 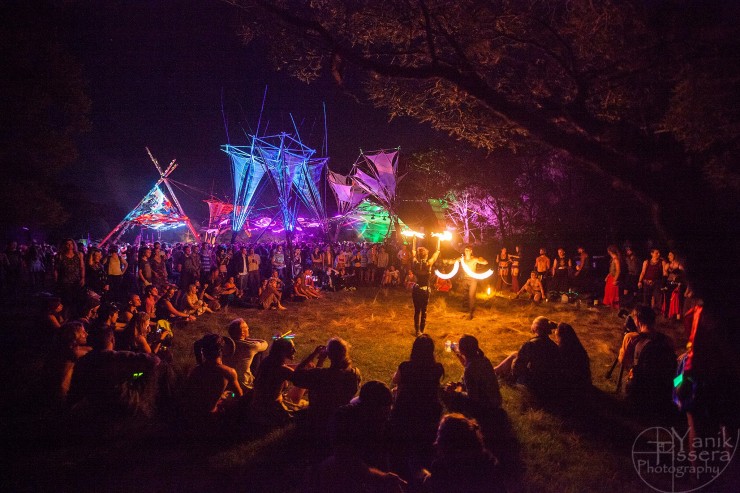 The sun breaks above the tree line and smashes into the dreaming face of the Pirate who awakes slowly, grumbling. He had somehow found his way under the shelter of the Peace Clown. Said Clown was drooling through his dreams. The noise of shovels dunking into the ground and dirt thudding echoed around them; the Pirate grew curious. He ventured toward the strange reverberation. Over the rise was a party of festival folk with boxes full of trees, which were native species to this region. Indeed they were planting them throughout the campsite, filling the space with shade for future generations.

The Pirate plants a blue gum tree himself. “I wonder how long until it starts fruiting?” he pondered. “I love chewing blue gum.” After patting the earth, the pirate wanders off in search of a latrine.

Trees are so important. Far more important than some realize. The pirate learned this by reading a leaflet in the compost toilet (oh yeah, they have compost toilets). The fact of the matter is that we need trees. To offset the CO2 each of us humans expel, we need at least 5 trees to soak it in. That’s significant. “Interesting…” thought the Pirate. “I wonder if that leaflet is printed on virgin paper?”

He dumps a shovel load of sawdust and steps out of the crap shack into the afternoon light. Dropping down from the platform, he is inches from being struck by a racing rabbit dressed in a petticoat. He is furiously twisting the dials on his pocket watch as he runs, mumbling about being late for High Tea… 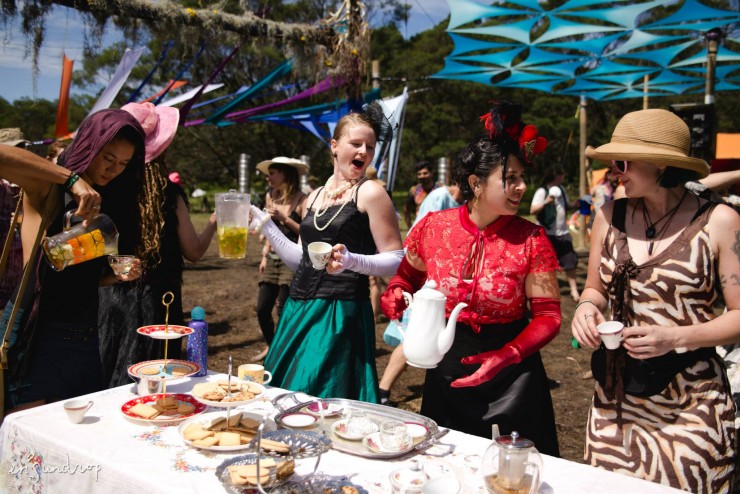