This album was made possible by listeners and fans like you…….

…kind contributors of a co-creative art campaign on Indiegogo, started almost a year ago. It worked like this: in return for an investment, starting at $4, supporters were guaranteed a new Skytree album (the first since 2011) upon its completion. And, because they earned some sky-karma points in the deal, Skytree ensured the return with signed CDs, posters, super fancy hats, full discography on wood-encased, laser-engraved flash drives, Skype sessions, and many more thoughtful, custom-made, techie, Earthen desirables. This would be a ton of work for one person perhaps, but thankfully Evan Skytree Snyder doesn’t work alone. Supporting the core of the visual effort is his partner and flame, Hayley Carloni, the pixel-manipulating force behind his sound. In addition to all of his album artwork and his new website, Hayley also produced the video below, with footage from videographer and friend Kyle Rober of Electrogenic. The process and campaign set the stage for a collaboration of intrinsic value, as Evan explained in this video to his fans:

With the absence of record stores came a decreased connection between the fan and the physical output of the artist – no CD, no full-size, printed album art, no bio, no parental advisory sticker. The recognition of fan involvement to reach out to make this album physical gave it character from day one. It’s refreshing to see an intentional connection between the artist and listener, in a way that re-establishes some of those old ways that sometimes seem lost but like most things, are cyclical.

As we delve into this deep meshing of humanity, nature, technology, and the cosmos, the first track, “God Detector,” featuring Michael Garfield, blankets the mind with a philosophical spirit, “What is the evolutionary advantage to having some part of the brain that seems to trigger or mediate the experience of the transcendence?”spoken by Dennis McKenna in the archives of D.M.T: The Spirit Molecule’s DMT:RMX project, addresses the physical function of the brain and its connection to one’s spirituality, the universe, multiverse, and God. To accompany Mr. McKenna, the crunching drag of quartz crystal, percussively skipping with homorhythmic intelligence, accompanies Skytree’s signature bass. Large harmonic waves of information fill a cerebral soundscape. Digitally manipulated analog strings induce vast neural imagery, playing laterally around the track’s frame. This introduction led me to believe that this would be the direction the remaining 11 tracks would take. However, while many themes remained, the album is in fact divided into three, four track sections, each with a distinct feel and approach…

The second track ,”Great Central Sun,” seems to refer in equal parts to the origin of love and life, the all encompassing source of being, the “I AM,” as well as the literal gravitational singularity at the core of our Milky Way galaxy. In it, Skytree uses re-pitched bird calls, flutes, vocoded mantras (the only track on the album featuring his own voice), and other tempo-synced cogs. It seamlessly melds into “Jah Tah” featuring Esseks and Jemineye. A minute into “Jah Tah,” a cleverly-placed human voice of radio correspondence over lost AM frequencies seem to echo words from the following companion track, brilliantly weaving the individual pieces together.

The ancient/future vocals are intriguing, rhythmic, and contagious. The lyrics sound like fragmented Sioux or Navajo with a simple rapping drum beat. Trap tribal. The fourth track, the first of three endings to each section of the trilogy, consists of an ambient dissolve. These ethereal transitions, the second half of “Star Forest” featuring Space Jesus, “Distant Song of the Earth” featuring AJ Block, and “Magellenic Stream” featuring Laura Karuna, close each section. Individually, they inspire specific environments and feelings, each containing ambient genius in their own respective visions.

The almost Biblical power present in the cinematic elements is flooring and even chronologically disorienting when changing sonic environments. Utilizing programs such as Paul’s Extreme Sound Stretch to lengthen a sound, time becomes distorted, seemingly giving some soundscapes infinite space. For the sounds within the space, Evan often uses a field microphone, selecting a particular sound, then extracting it from the surrounding environment while allowing the rest to breathe. Back at the lab, he uses an array of analog and software-based instruments to manipulate these “sonic artifacts.”

For “Star Forest,” featuring Space Jesus, the producer duo sampled an elk, an eastern wood peewee (a bird), and the sound of an entire apple being eaten. These elements become a masterful blend of two distinct environments, from the forest on Earth, and later into the EM-dense edge of deep space, which feels dissociated and lost, oblivious to when the transition from forest to stars occurred. “Mana Machine,” featuring Erothyme and Technicolor Lenses, marks the beginning of the next chapter with phenomenal delivery and message. Guitar from Esseks accents the vocabulary, which Evan weaves into his creative process.

The “title” track and halfway point in the album is “Cloud People,” a track written as an archival collaboration with Evan’s younger brother, Alan.

Personal and meaningful, the piece has characteristics of Skytree‘s earlier works – the soulful warped wavelength reminiscent of “Earth Sing,” the birds chirping, with a gentler Skybass sound, yet still sounding fresh and original. Beautifully lacing through the many forms of voice is a cello played by Katherine S An. The soft piece is followed by “Unstopable Light Soldiers,” featuring Waters. The smooth dark tone, metallic chopping beat and grounded human message makes the blurring of realms apparent. The album contains many genres and environments, but the line between realms is seemingly unnoticeable. The last chapter in the trilogy contains the track “Record Keeper,” featuring Tectum. The psydub tribal trance is the product of innovation. 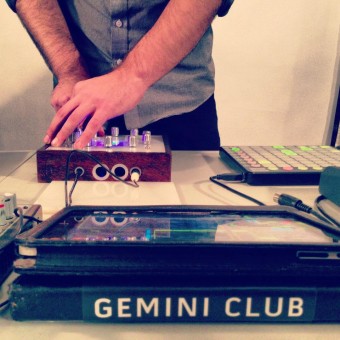 When two different artists who have their own original, distinct sound come together, and by sonic alchemy create a brand new thing, it’s not just a combination of what they do individually under those monikers, but rather the use of original thought, experience, and chemistry in the studio. In this case, it makes for one amazing journey. Combine that with Frank HEISS drum machines and a prototype synth, and you get a gem. The originality of this layer parallels the originality of the synth used to make it, Unatronic’s “Gemini Capsule,” then in a prototype stage in Chicago.

“SkyCell,” featuring LuneCell, is a psychedelic amalgam of electronic music adjectives. The hybrid, progressive psy-glitch-whomp gives off an energy of change, morphing, and a state of constant flux. A variance in tempo gives the track that living feel, along with a tone of malleable organic alloy. While the following, “Hexeract,” featuring D.V.S* and Supersillyus, remains psychedelic, a shift to elements of mechanical, geometrical and mathematical influence dominate the first half. In the second, a heavenly essence with long bright organ tones, sculpted from choice D.V.S* guitar swatches, gently lowers the frequency into the angelic ambience of the album’s outro which features operatic vocals stretched to 2001-like epic stellar eeriness.

The final product is a single complete work of art due to the care that went into the components of the whole. On the micro level, listen closely as the sounds themselves are carefully designed, and each is beautifully mastered by audio engineer Brendan Connors at Metronome Studios. Looking at the tracks, each piece compliments the next with smooth transitions and integration into the next chapter. Getting a larger view and the chapters within the trilogy only exist because the other two do too. This is the message of the album. Everything is connected, whether your perspective is as a simple stone on peaceful Earth or a spec of dust in the chaotic dying star of the Cat’s Eye Nebula 1,000 parsecs away… The stone touches the air, the air meets the sky, the sky meets the ozone, ozone blends into the stratosphere and out into space, through the stars and over to the constellation Draco where the Cat’s Eye Nebula is and the spec of dust. Blurring the deceptive lines of restriction and allowing the free exchange of energy is the message in Cirrus Sapiens.

Below is Evan being funny: