We had the immense pleasure of sitting down with Bluetech recently to discuss his mission to convert to solar power, the modern role of an electronic artist, the evolution of EDM culture, and the current state of his soul…

“The power I am using to create music in my home is literally destroying the beauty and the species that surround me. In Hawaii, our power is mostly supplied by fuel brought in from outside of the island, so local power baron’s are looking to expand the geothermal projects on the big island. The energy project, undertaken by True Geothermal Company and endorsed by Hawaii’s governor, has already invaded the largest intact tropical lowland rain forest in the United States. Now, they are seeking to expand and build a new geothermal plant right on the coast, disturbing one of the most beautiful community beaches in the area. Law suits have been ongoing in the history of the existing geothermal plant since it’s inception. Many accidents involving venting of toxic gasses into the surrounding neighborhood have happened, most with inadequate warning alerts and reporting to the public. The people here are traumatized by an earlier blow out that forced a major evacuation. There is often steam and brine in the air. Drilling noise has gone on all day and night for many months, destroying the peace of this rural community. Local people finally passed a new regulation that prevents drilling at night in the future. The hydrogen sulfide (H2S), and other toxins have been documented in significant quantities. We believe this has led to illness and deaths of plants, animals, birds, fish and humans, and studies still need to be done. This is literally in my backyard. The current plant is less than a mile away, and if you go down my road you arrive at the beach which is the proposed spot for the next geothermal plant – Isaac Hale Beach Park. The Hale family are actually my next door neighbors, so this is about as close to home as it can get. You can co-create making music with me in a more ecologically responsible way, by supporting the new ‘Basement Dubs’ EP. All proceeds go to converting my studio to solar power: Buy the album here.“

[LiS] Many people have been inspired by the higher purpose you have for creating your art (spreading awareness about issues you care about, and now using the funds from the Basement Dubs EP to convert your studio to solar power). Can you give us the history on your role as an artist-activist?

[Bluetech] It’s hard to define my history as an activist, as I really don’t see myself as an activist per se. I’ve always tried to use my music to help define a sense of place for people, of really being in presence, or an awareness of how they fit into their world, both natural and inorganic. I guess in that process, the music has started affecting me as well! I started feeling in a deeper way, and becoming aware of the consequences of my personal decisions, as well as the decisions of my immediate electronic music culture, the national culture, and the expanded technological culture. I also really started tuning into the frequencies of the natural world. For me, the only possible response to the ecstatic beauty of the world, the constant harmony of all the living things, is one of respect and honoring. I love life, in all its forms, and when you love something you want to see it continue in health and beauty. So I guess, I’m trying to find a way to live in constant prayer, whether that means seeing the divinity of the cashier at the grocery store, or raising funds for indigenous cultures in the Amazon, or cultivating and planting endangered plants. It’s all a part of the same web, and it’s all beautiful. To make a long story short (too late), I don’t really feel like an activist, I think I’m just a kind of foolish lovestruck mystic who is starting to see the Divine everywhere.

Can you give us the stories behind the songs on Basement Dubs? What is the thinking that went into each song? What were you doing/experiencing at the time you made them?

The songs on Basement Dubs came together over the last year, and I definitely had in my mind that I wanted to address the solar power issue with this EP. I was originally going to call it Solar Entities, but the track Basement Dubs kind of summed up the aesthetic of the whole release, so I figured it would make sense to use it as the title. The Abakus and Adham Shaikh remixes were commissioned from them, while the other 3 tracks were written specifically for this EP.

We’d like to know who you are spiritually, morally, and ethically. What are your values?

Man, this is a loaded question. Who are any of us? I discussed my values a bit in the response to the first question. In general I tend not to hold to close to concrete ideologies and ‘isms, as I find they often are tools to define and separate people rather than bring them together. Rather than subscribing to the most potent “ology,” I’d rather be present. I guess I’m trying to be local and organic in my approach to consciousness, to use a strange metaphor. It means approaching each moment holistically, and finding the beauty and power in whatever is unfolding in front of me. It’s quite a challenge but it allows me to find the greatest teachings in the smallest insignificant things. 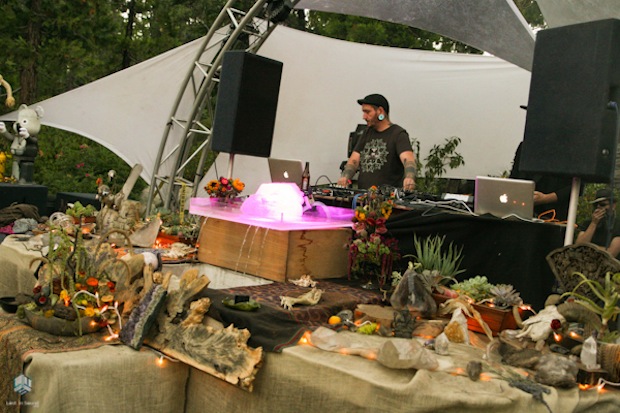 Do you have any rituals?

I do have rituals and ceremonies, many of them actually, though they are very personal to me and some of them are passed down in an oral lineage and therefore lose their vibrance and beauty if I were to try to write them down, like capturing a butterfly and pinning it down into a display case.

In your opinion, how is the role of electronic music, dance, and festival culture changing?

I’d like to answer this question with my hope for the evolution of electronic music culture. It’s easy to preach to the choir and talk about consciousness and responsibility, yet just continue on without addressing real change, which takes serious work. I would love to see the leaders and creators of our culture taking a dynamic approach to channeling the massive power created by the resources and energy of all the people that love this music and not be afraid to ask difficult questions. I am seeing a whole generation of my peers and fellow producers begin to use the amazing platform of a dedicated fanbase to create awareness of causes which matter to them, and I think this is really exciting. There is still a lot of work to do however! There is a lot of irresponsible behavior when it comes to the economics and chemical usage around festival culture, not to mention the continued dialogue around music piracy, but I am holding hope that we can evolve our culture into something worth being proud of.

What is the current state of your soul?

The current state of my soul is a glowing spark flowing in an infinite spiraling river of light, oscillating outside of time and space, yet perfectly comfortable in my imperfect and decaying human body.

Be sure to check out KenSilva’s review of Bluetech’s Basement Dubs EP here.