FUTUROPOLIS. The future is invented in California. You knew this. Movies. The Internet. Snoop Dogg. Leave the magic 8 ball at home, you won’t be needing it. Here’s what’s going to happen: your last hours of 2012 are going to be dirty, mucky, greasy, and deep. Your first hours of 2013 will be dipped head to toe in a truly filthy funky NorCal elixir. For real tho. 1015 Folsom’s New Years Eve event features hella Bay Area masters, homegrowns, and transplants. In addition to our own local style, we’ll see some friends from across the pond (the big-ass *can’t-take-BART-there* pond) who will hook up some intercontinental flavor. Toss in a few rotten Big Apple representatives for good measure and you’re damn near looking into a crystal ball. Produced by Euphonic Conceptions, An-Ten-Nae, Soundpieces, 120 minutes and Club Exotica.

The future is now.

Star Slinger. The British DJ headlines. He’s got disco/soul/R&B hooks like chicken and waffles. How did he know? Holy Other. Slinky, o-zone, atmospheric celestial shit, no doubt the bass will have you on your knees. DJ Laura Low + An-Ten-Nae = LowRIDERz. Dirty crunk-heavy trap boom boom bass bringin’ Oakland out for the night. You’ll be doing double takes all night left and right watching all the nasty moves going down with these heavy hitters. Random Rab will take us on an underwater vision quest. Obscured melodies hold your hand through the underwater bits submarine style, coming up for air only when absolutely necessary.

Polish Ambassador. This bass keeper strives for carbon-neutrality which is extra sexy in the Bay. Sinjin Hawke. Robot style jams, not too heavy, just heavy enough. Step into my time warp/phase change machine. Reflective and shiny beats; stainless steel not chrome. Andreilien. Ragga glitch hop. Super sticky. Mykki Blanco is from New York. Acid punk. Super gritty like you’ve got sand in your ice cream. Blackbird Blackbird. Tropical lullabies for staying awake so you can watch a warm breeze blow your cocktail over and then ask the bartender for another, which is promptly supplied, on the house. R/D is gonna melt your heart and your head with some smoky dubbydubtrap, so grimey it’s romantic. ChaunceyCC. Super solid trap + hip-hop for days. El PapaChango, You’re going to want to keep an eye on El Papa pulling through with salty tropical cumbia + hip-hop + electro. Don’t miss this fella, he’s going to skunk it up so hard you’ll need to take a bath in tomato juice. 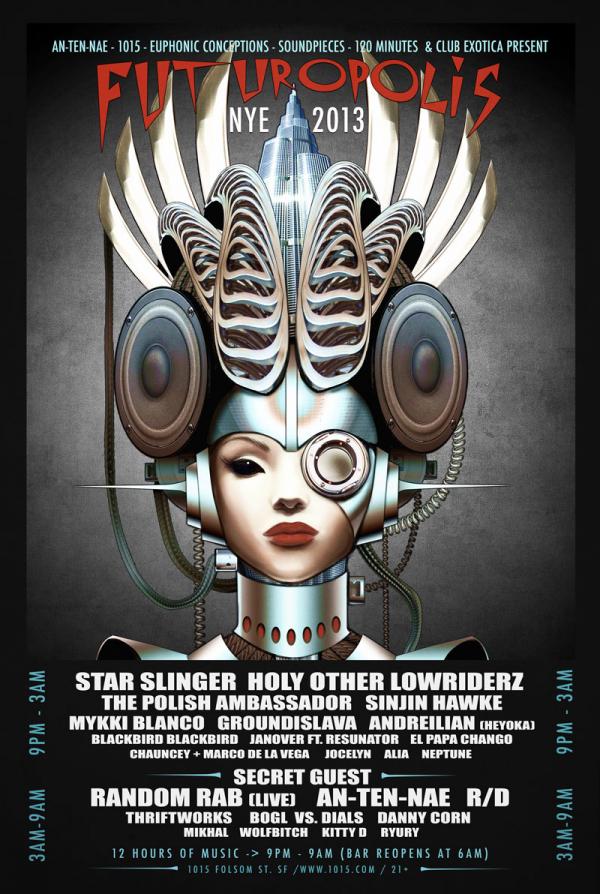