At times New York City can seem like a non-stop running festival, where the opportunity to catch an amazing artist or musical act on any given night of the week is both plentiful and commonplace. However, the chance to experience a show on a quality sound system is much more limited. This is why I was beyond stoked when I found out that Subverse-NYC was teaming up with The Tsunami Bass Experience to bring TRUTH, Mesck, I.N.I, Max Mischief, and Diggadee MC to The Paper Box in Brooklyn on April 6th for a night of dark and heavy bass-fueled whompage. A tight lineup coupled with the debut of a new line of handcrafted custom LABHORN subwoofers meant that any bass gremlin attending this one was in for a real nighttime treat. 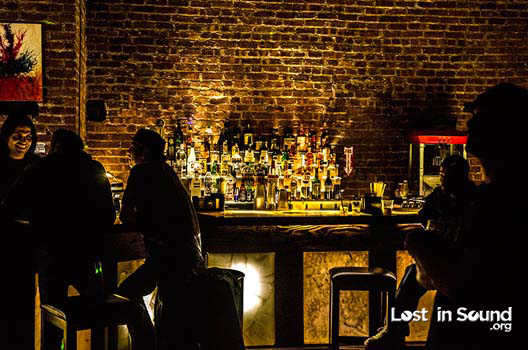 Upon arriving at The Paper Box, I was immediately gripped by the serious sound reinforcement that I could both see and hear towards the back of the space. After hugging some homies, I headed to the bar stationed on the right side of the venue for a frosty beverage. TPB offers a legit beer selection and drives a hard bargain in regards to mixed drinks, which are priced substantially lower compared to those in Manhattan. It should also be noted that the “Backyard” or outdoor graffitied patio space of TPB provides the perfect place for smokers to medicate or take a quick bogey break at any point throughout the show. Super clutch.

Max Mischief and I.N.I set the proper groundwork for the night, both dropping delicious dubstep bombs amplified on eight scrumptious subwoofers – the bass clear and crisp. Cold brew in hand, heavily medicated, Lost in Sound soldiers surrounding me… Before I realized, I was in the thick of it. That’s when Mesck, a dope DJ and producer hailing from LA and my favorite act of the night, took center stage and crafted a seamless set consisting of a variety of deep dubstep crowd pleasers. His track selection was really on point, and I definitely danced the hardest all night during his set. I made sure to do the rude boy stomp around the entire space, deliberately weaving in and out of the small clusters of people either bobbing their heads or breaking it down.

Lately I have noticed that a lot of artists in the scene play sets full of other peoples music. As much as I appreciate that, Mesck made sure that his originals and collaborations with other artists stood out from the rest. Hitting harder than the previous set, the crowd was revved up and absolutely pleased with the outcome of the orchestrated low frequencies dwelling out of the lab horns.

It was at this time that I realized that the turnout for the event was not as large as it deserved to be. But any lack of physical presence was made up for by the boundless energy emitted by Diggadee MC. His enthusiasm was surprisingly not irritating, but rather successful in keeping the crowd hyped up. TRUTH blessed the crowd with a heavy set of originals, remixing of The Weeknd, and dubs from the likes of many other UK bass artists. Compliments to TRUTH for bringing the fuego to NYC, and respect to TSBE/Subverse-NYC for supplying the artists with a sick sound system to drop knowledge on; it definitely matched the level of talent displayed this night.

[LiS] What hardware and software is used in your production, and how does it differ from when you perform on stage?
[TRUTH] With production we use FL Studio as our DAW, but it’s all about the VST’s we use really. Synths from the likes of Native Instruments, Rob Papen, u-he etc… And then lots of plugins from all over the place. The most important being EQ, Reverb, Compression, Distortion, and a few others. As far as hardware is concerned, in New Zealand we had a lot of hardware in our setup. I think our favourite piece was the Juno 6, but that stuff is all back in NZ, so currently we’re all software based with midi controllers. Looking to expand the US studio to incorporate some new hardware of course! Live, we are DJ’s. We use Technics 1200’s and a Pioneer DJM900 mixer with Serato Scratch Live.

How do you go about choosing the samples you incorporate into your tracks?
We don’t really have any set methods when sampling. We go through a lot of sources, movies, old music, random sounds, sample packs, etc. – just whatever sounds good! Sometimes we’ll be watching TV and hear something, and just have to sample it immediately, then get in the studio!

Who is currently inspiring you, and do you have or will you make plans to work with them in the future?
There’s a lot of inspiring stuff out there right now. In our own scene, we’ll always be inspired by the likes of Mala, Youngsta… The guys who have been pushing it since day one. Of course there’s a whole new generation of producers out there to keep us on our toes as well: Kaiju, Content, Dubtek, etc. We will also always be inspired by our oldskool heroes, people like Ed Rush and Optical, Photek, Bad Company, Metalheadz in general…

Noisia are a big inspiration, always pushing the envelope. Have been enjoying their Devil May Cry game soundtrack. For us it’s always good to look outside the box. We’re not necessarily taking production tips, but sometimes it’s interesting to see how people approach music and the way it is presented. There’s inspiration wherever you look. At the moment, our plan is to work with as many talented artists as we can, and continue to build our own sound.

How did you decide on the TRUTH logo you have today? Who designed it?
We asked a good friend of ours and an amazing artist (Dcypher) to come up with some concepts for the name TRUTH. He got to work illustrating and came up with about six comic horror concepts for us to look at. We were drawn to the image of the man shielding his face and the “TRUTH” writing, so our friend expanded on that concept and drew some additional images, and that’s how we decided. We have also used Dcypher’s art for both of our albums (Puppets and Love’s Shadow).

What are the differences between holding residencies in SF from holding them in NZ?
We haven’t held a residency in New Zealand for so long that it would be impossible to compare. In NZ we have particular promoters in each of the cities that we like to work with, but they handle the booking, promotion, and logistics of the show.

In SF with our “Deep, Dark, and Dangerous” night, we’re more hands on, deciding on lineups, promotion, etc. So for us, while we’re not taking much risk, we’re still very much involved!

You were living in SF for a little bit, but you’re now in Denver. Are you settling there for a while or considering other cities? What goes into that consideration?
Right now one of us is in Denver, and one of us is in San Francisco. There’s a lot that goes into it, every city has it’s pro’s and con’s. I guess we take into account the quality of the bass music scene there, standard of living, as well as the people/connections in that city. With the current 2-city arrangement, it just means we’ll be jetting back and forth as much as possible… Which ties in really well with our two monthly “Deep, Dark, and Dangerous.” One in Denver and the other in San Fran.

What direction is TRUTH taking in this new year, and do you plan on playing any US summer festivals?
In 2013 we’re going to keep pushing ahead, moving things further! We already have a solid release schedule lined up which includes a couple of releases on Tempa, an EP on Boka, 12”s on Deep Medi, New Moon, and Section8 recordings. Later on in the year we’ll be releasing a new album, though we have yet to record/produce it, or decide on the exact format we’ll be going with. We set up our label last year to release our album Love’s Shadow, so in 2013 we plan on taking things to the next level. Looking out for exciting new artists and projects to work on with that.

As far as our sound is concerned, our aim is to be the best at what we do. We’ll definitely be working with artists who we haven’t done stuff with before, and keeping an open mind about the direction music is taking in general. US summer festivals are definitely in the cards. We played at SXSW, WMC, and Snowball in March, and have a few other things up our sleeves for later in the year including some Canadian festivals! We’re also planning two or three UK/EU tours, in addition to a NZ/Australia tour as well.

Andreilien aka Andrei Olenev first emerged as Heyoka on the San Francisco underground glitch/bass scene in 2006. By 2009, he…