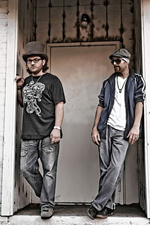 On Friday January 4th (with Signal Path, Ramona) and Saturday the 5th (w/ Orgone, Ramona), Denver will continue their groove as if New Years Eve never ended. That, of course, is one of the many reasons Denver is so loved. Hardly anytime to catch your breath or rest your toes between amazing dance-a-thons, a 3-night run of either Cheese or Tribe (or many of the other NYE events around CO) quickly leads into a back-to-back BoomBox dance party. After listening to their productions, if anybody had any doubt about what a BoomBox show is like, I simply direct you to attend one. You will not be disappointed. Nor will ever question the duo again.

No strangers to the scene here, BoomBox (consisting of Zion Godchaux on vocals/guitar & Russ Randolph as producer/DJ) are a favorite amongst Colorado fans. And as the New Year has just started, so has their winter tour. Recently beginning at the end of 2012 with a hometown show in Alabama, they then shuffled westward for their NYE celebration at the SnowGlobe Festival in Lake Tahoe, California. Before raging in the middle of the ocean on a yacht under the sun, a la Jam Cruise 11, BoomBox is making sure to give apt meaning to the name of their season tour. I’m sure a stop in the Rocky Mountain State wasn’t necessary between NYE & Jam Cruise, however the duo wants nothing more than to give back to the state that has already showed them inordinate love.

Having sold out most of their previous dates in Colorado over the past couple of years, if you don’t already have tickets to the 4th or 5th, I would not hesitate in getting to the venue early or purchasing tickets NOW. Just because you can still buy tickets to both nights, I wouldn’t consider this a slam dunk. A much smaller winter run for Coloradans this year compared to almost exactly 2 years ago, where they played 8 SHOWS IN 9 NIGHTS, this year they start in Avon on the 2nd, Aspen on the 3rd, and then 2 solid nights at The Ogden on Colfax in Denver.

A beauty of a venue for this act, appealing to my picky self which would probably rather prefer to see these guys in a late night dance tent come festival season. To get a taste of their live shows and even catch a glimpse of the value they put on CO which I mentioned before, head over to their their SoundCloud page – where 5 of the tracks on their homepage are from various Colorado venues from Denver to Breck to StateBridge…Now that’s love!