Some electronic artists provide the listener with amazing beats without live instrumentation or a live act. Beats Antique makes sure you know they are as much about pleasing the music aficionado’s eyes as they are about their robot ears. The live Beats show demonstrates David Satori’s skills on stringed instruments, Sidecar Tommy’s (Tommy Cappel) authority on his drum kit (with an insane cat face painted on the bass drum), and Zoe Jakes’ masterful and stunning belly dancing proves that she shares a close connection to the music (which she also helps produce). 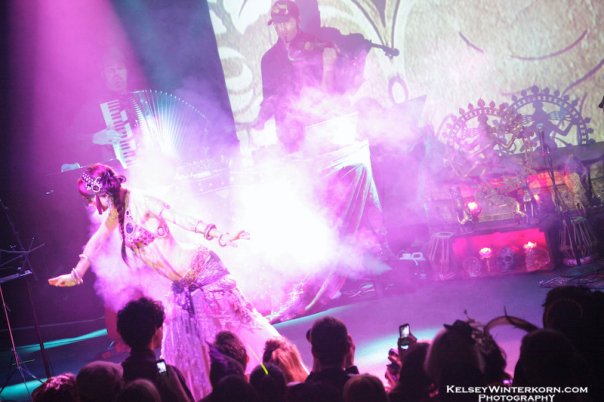 Satori and Sidecar are always sporting the freshest West Coast fashion, and Jakes’ belly dancing garb includes an array of shiny bangles, feathered fans and exotic cosmetics. Not to mention, there comes a time during every live show when the band dawns ludicrous rubber animal masks and goes buck wild; an example of the band’s roots in San Francisco’s performance art scene. The band has kept it moving all throughout the music festival season, throwing down at Sea of Dreams, Coachella, Lightning in a Bottle and Outside Lands, as well as bringing the West Coast to Camp Bisco, Liberate Festival and Lollapalooza.

The mystifying trio has shown that they can tackle pretty much every style imaginable, meshing Middle Eastern melodies and bluesy folk with new age jazz and hip-hop influenced beats. Berklee graduate Cappel and Cal Arts grad Satori are the embodiment of classically trained musicians and composers. Their musical education also comes from  traveling to places such as Bali, West Africa, and Serbia, which is apparent in their music. Much like worldwide phenomenon Shpongle, Beats Antique produces distinctive music that has a universal appeal.

Beats Antique’s new album “Blind Threshold”, mastered by legendary producer Tipper, is their third full release since their genesis in 2007. They’ve achieved quite the discography already. I nabbed this album by chance about a month ago, and I can easily say that it ages like fine wine. The album flexes electronic production with their ability to create old-fashioned classical compositions (“Prelude”). Most tracks are around four to five minutes long, making for a lengthy and well-produced album from the infamous group. The second half of the album is much less about the low end, replacing bass heavy knee shakers with more intricate instrumentals. The guest musicians included on the album (see list below) really exhibit how much of a force the band is in the studio. It reminds me of the band’s special New Years show that Dizzurt and I attended at The Independent in San Francisco. Throughout the show there were too many musicians and dancers performing on and off the stage to count. Is there any instrument that this band doesn’t use?! My favorite being the antique, laser-guided harmonica provided by Blues Traveler frontman John Popper. Be sure to listen for yourself and download “Blind Threshold.”

Stream of Consciousness on Stand Out Tracks:

“Revival”– Inauspicious basslines. Weird glitch-motorized sound like a watch maker. Like a foggy night in some dark alley from a European mystery novel. Echoing and reverb. Almost makes me want to start slow-mo belly dancing… One of those songs where the vocals act as an instrument. One of the most interesting, slower songs I’ve heard by them.

“Spiderbite”– With a name like that, you know the trio has some venomous beats prepared. West Coast style womp, repeating and liquified. Sounds like some Twangstep! I would love to hear this song played on a dope sound system. Sidecar provides lots of smashes, switching from electronic drums to organic percussion.

“Rising Tide (Feat. LYNX)– Beats Antique made a smart choice collaborating with their friend, Colorado vocalist and rapper Lynx. Her intelligent lyrics and unique voice stand out on this track. Sweet sea imagery in the lyrics and an interesting reference to technology overload: “You know you we’re born for more than what machines provide.”

“There Ya Go (Feat. John Popper)”– Starts off like the soundtrack to a thriller movie. Popper’s laser-guided harmonica drops in with a strange and arpeggiated sound. The whole song is a wild brass vibrato extravaganza driven by the plucking of Satori’s viola, which he plays like a mandolin.

“Merry Go Round”– Funky plunky beats like the music on a spinning steam punk merry go round. It’s got kind of a Bonobo style jazz meets Bassnectar trip-hop sound. I can picture excited ox and horse heads pumping up and down the Beats Antique carnival ride. This song is barely recognizable as one of theirs… taking it to another level. 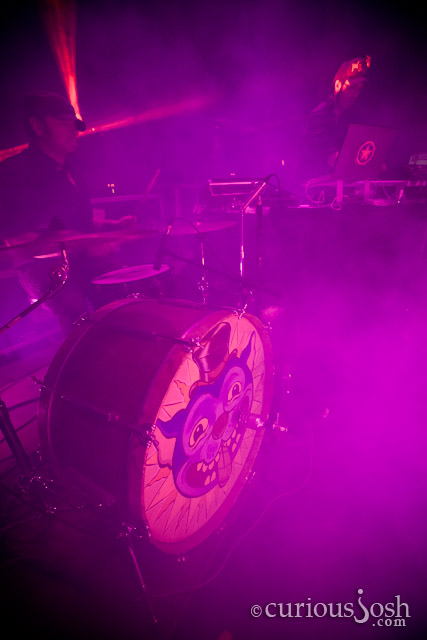