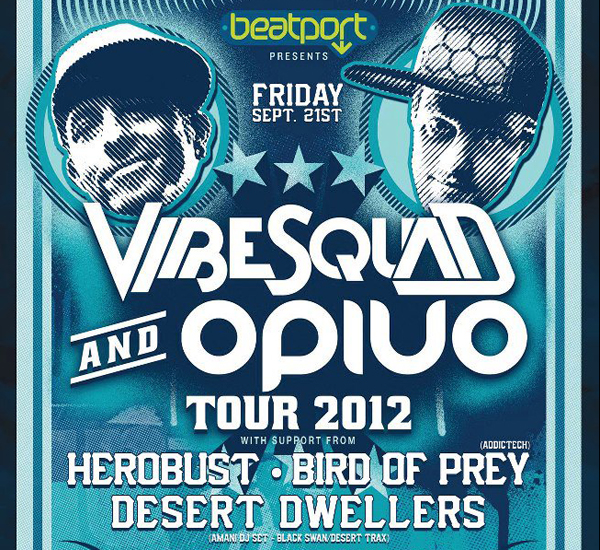 September 21st had been marked on the calendar for quite some time.  One of the most anticipated shows of the season had finally arrived.  Opiuo and Vibesquad on the same bill is quite a spectacle in itself, but when you’ve got support from the likes of Desert Dwellers, Herobust, and Bird of Prey, we’re talkin’ a whole new level of bass wizardry. Who else but Mr. Bugsly Presents provided us with THE get down of the season.

The newly opened Club 39 played host for the night and we were all curious to see how this venue would perform. There’s a lot more to it than you would think; sound quality, security, bar layout + prices, smoking area, VIP, etc.  There were a few security mishaps that took place but the event producers took immediate action to ensure that this sort of thing would never happen again – power to the people! Overall we give Club 39 an A- for a welcoming vibe, great sound quality, and an astounding laser/light show.

Amani from Desert Dwellers laid the foundation for the night with his West Coast, bass heavy, yoga womp. The crowd was just arriving but the vibe was perfect to kick off the night. Even with a less than a crowded dance floor, people couldn’t resist letting their bodies loosen to the ambient bass grooves. As people filed into Club 39 from the massive line outside, the ravers, clubbers, and burners alike congregated together on the dance floor. 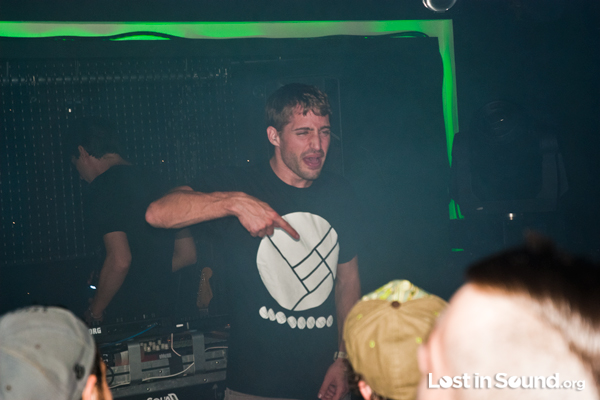 Herobust was arguably the least known artist on the bill.  Boy oh boy did he make up for it with enthusiasm.  I find nothing better than being pleasantly surprised- no, blown away, by a  supporting / opening act.  Herobust was dancing behind the decks like there was no tomorrow, constantly movin’ and grooving throwing down his homemade beats and remixes.  His remix of Flux Pavillion’s “Bass Cannon” was definitely a crowd pleaser.  This is what underground bass music is all about.  A scarcely known artist took a world famous dubstep track, devoured it whole, and regurgitated a chopped up, sexy, bass infused version that is nobody’s but his own.  Herobust served as a delightful appetizer for the madness that was about to ensue.

I was going to try and describe Opiuo’s sound, but I’ve decided to take a different route.  Grab yourself a huge mixing bowl. Take a heaping mound of glitch-hop and combine it with lots of syrupy bass sauce. Then add a variety of worldwide, ageless influences, along with live electronic drum pads. Sprinkle with some Kiwi/Australian flavor and bake with relentless energy and enthusiasm and voila! You’ve got yourself some Opiuo! Opiuo’s live performance isn’t the same as your typical DJ. No song sounds the same as they do via SoundCloud or your iTunes. He’s even working on a live band extravaganza which speaks even more to the talent he holds. His electronic drum pads add a whole other dimension to the performance. While sometimes it took away from the flow and confused ragers on the anticipated ‘drop,’ those with a developed musical pallet appreciated it nonetheless. Crowd favorites like “Robo Booty” and “Patchouli Dump Truck” should of came with a warning sign: Caution – these tracks cause serious rump shaking, and that they did. 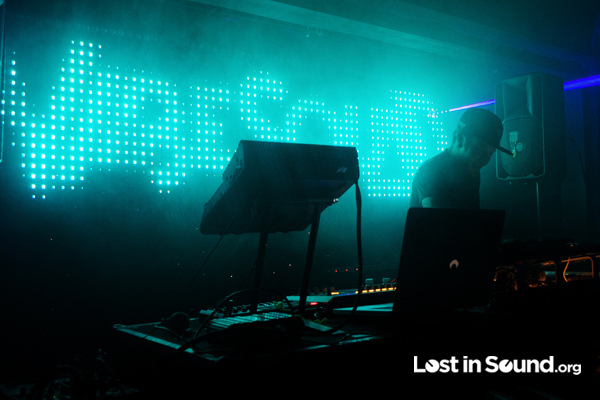 After Opiuo’s raucous performance, I must admit I thought the crowd would be somewhat drained for VibeSquaD. To my surprise, it seemed that everyone’s chemistry still hadn’t reached its peak potential. Colorado native Aaron Holstein needed no introduction or warmup.  The crowd was nice and broken in and he got right to it. One soldier came up to me during Opiuo exclaiming “this is the headliner right? No one will be able to top this!?” Halfway through VibeSquaD’s set, I turned my head and the kid shot me a look of pure disbelief. He played some classics off the album Joyful Noise, but got really down and dirty with some tracks off his newest release Orphan Alien Pt. 2. I think Vibesquad is underrated as a producer, especially when it comes to remixing tracks which he showed off last week.  Keep an eye and an ear out for VibeSquaD, we expect more BIG things from this dude.

Bird of Prey was the perfect artist to close out an already incredible night. His entrancing tribal bass sound hit the spot over and over again.  The vibe had become a lot more intimate with only the Varsity players left in the game. Torin‘s cool demeanor and face full of smiles made us feel welcome. I took a second to think – there really was no other place I’d rather be. Even though it had now reached the 4th hour of the next morning, we were all dancing like there was no tomorrow. When my personal favorite “Urge to Purge,” surged through the speakers, the master volume kicked up a notch, and even Torin himself gave an “Ohhhhh yeaaaah” expression. Nothing could go wrong, everything was in its right place, and when we were warned he only had one more song, we were too happy to even care. Bird of Prey’s tagline is “music to expand the heart and blow the mind.”  If you’ve seen him live, you can speak to this truth.

5 artists, all great in their own right and sound, put on a great show. This was definitely one for the books.

Review & Photos by Guy Shechter Two words – they’re back. It has been four…