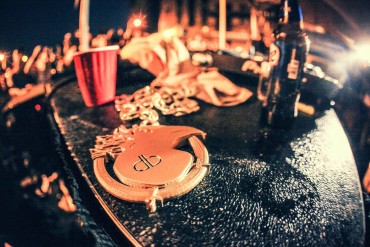 It all started some 14 years ago in Golden Gate Park.  Justin Martin and Claude VonStroke were in the midst of creating their signature sound they hoped would fill a gaping hole in house music. Christian Martin had just bought a new sound system. Grillson had all the BBQ essentials on deck. At first the attendance was modest, but they were grilling food amongst friends playing the music they loved. Little did they know it would evolve into a national tour selling out multiple cities. Despite all the fame and success, the tight knit Dirtybird crew has kept that same family like atmosphere they’ve had since day one.

On August 16th the party comes to an industrial waterfront location in Brooklyn. Of course Claude and Justin sit atop the lineup, but we are just as excited for the heavy hitting support this year. Shiba San‘s rise to the top has been well documented but unless you’ve seen him live, it’s just conversation.  J.Phlip has to be one of the most diverse, hardest working DJ/producers on the circuit. While all of her live sets possess plenty of firepower, none are similar in style or track selection. Don’t sleep on Kill Frenzy either. His latest album Taylr Swft made some serious waves – see “No Panties.” Another staple of the Dirtybird BBQ is their special guests, usually local stars of hip hop influence. This year we are welcoming hip hop’s greatest storyteller, none other than Slick Rick.

Don’t be surprised to see the Dirtybird crew mingling around the crowd either, getting down with their fans. This is truly an event not to be missed. If you act quick, for just $40 you can get access to some of the best beats and delicious BBQ that Brooklyn has ever seen. Check the Facebook event page for more info.