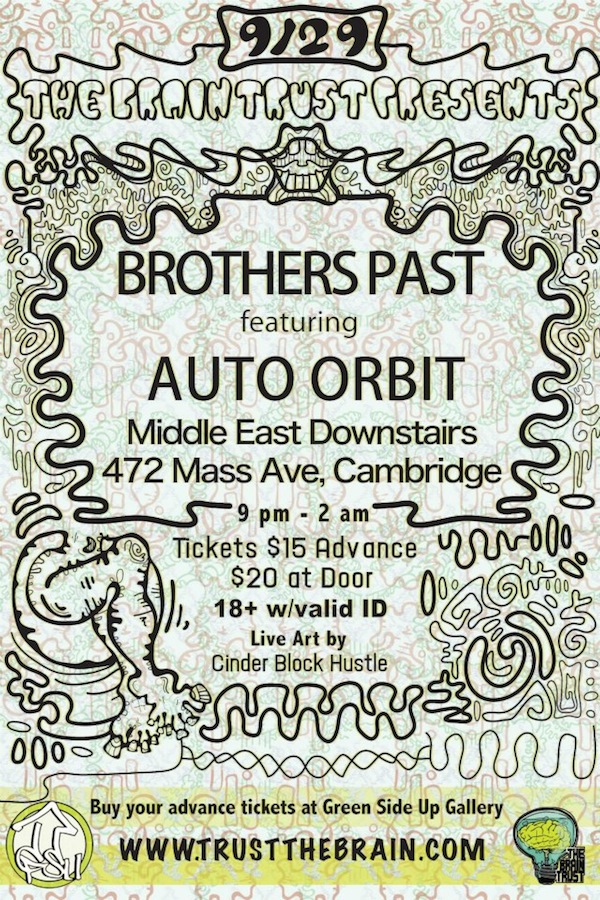 The Brain Trust is Proud to Present:

Philadelphia’s Brothers Past is emerging as one of the most talked about independent acts in the nation. The band conjures a new energetic sound, merging rock anthems with electronic exploration. Brothers Past has gained a reputation as a thunderous live act with an ever-growing repertoire of songs and sounds. Recently, the New York Press called Brothers Past, “the square-jawed, bastard child of Pink Floyd with a gigantic stage show.” Playing over 650 performances since 2000, the band brings their futuristic brand of improvisation to create concerts that seamlessly weave dance segments between their large and varied catalog of active songs. Consistent sell-outs of premiere venues in New York and other northeast cities, along with many near capacity shows throughout the country, attest to the band’s rising popularity and momentum.

Read Lost in Sound’s recent interview with Brothers Past HERE

Auto Orbit gained recognition playing huge sets at Camp Bisco, The Big Up, Magnetic Gathering and many more, becoming a fast hit as Boston’s The Weekly Dig labeled Auto Orbit a “top show” alongside Eoto at The Big Up 2011. For the past year, Auto Orbit has been crushing their own headlining slots as well as sharing the stage with national acts such as Beats Antique, Papadosio, Dopapod, Biodiesel, Sonic Spank, Future Rock, and more. Do not miss Auto Orbit as they come through your town!!

EVERY Wednesday at Wonderbar in Allston, MA, $5 cover, The Brain Trust and Wobblesauce bring…