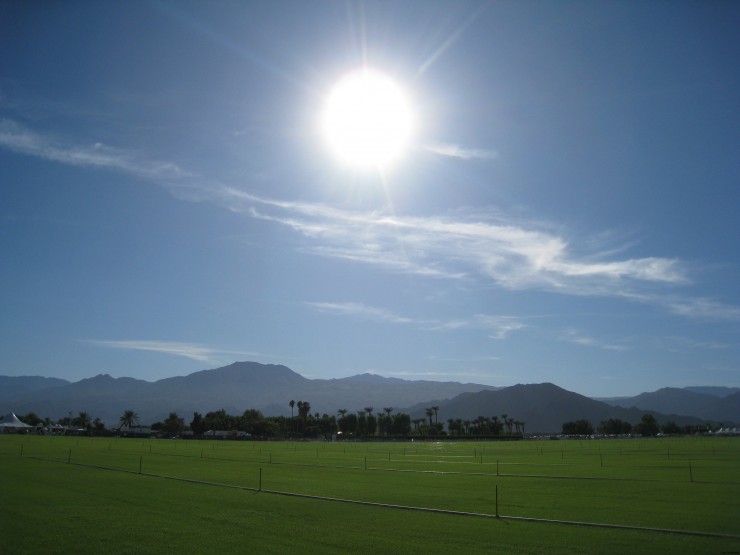 Phinally the date arrived! On Thursday October 29th, at 9am, my phlight to the West coast had taken off from JFK airport in New York City. Little did i know, while boarding, of the unique experience that would soon follow. I could feel the excitement from the moment we stepped foot on the plane. As we climbed through the aisle to take our seats, we could hear the excited chatter buzzing, as anxious talk of the festival dominated everyone’s conversations. It appeared as if the majority of people on board had begun their Phish mecca to California at the same time as us. Just when I thought things couldn’t smell more phishy, the stewardess told us that she was trying to make her way to the festival and asked if “anyone had her extra?” Wait… time check. What year is it? 1969? A stewardess trying to make her way to a festival? Totally groovy man.

Right before we brought our seats to an upright position the Phish-obsessed stewardess gave us a very special welcome to California. She blasted “2001” over the loudspeaker for the whole plane to rage to. Corny as it was, she humorously added “speaking of Trey, please put your tray tables in their locked positions.” It was in this Phish-community moment that my friends and I realized how epic this phestival was going to be.

When we arrived at LAX, we joked that it felt like we were stuck in that episode of South Park where hippies take over the town in order to throw a massive festival. Camping gear in hand, they were everywhere.

Finally, after a quick rage at In-N-Out Burger, we were in our rental car and on our way to the festival. A couple hours and one million wind turbines later, we arrived at Indio, our phinal destination. We immediately set up our camping gear in the campgrounds labeled, “Electric Ladyland”, and began to mingle.

The neighbors to our left were from Texas, the ones to our right were from Colorado, the ones in front of us were from Oregon and the ones behind us were from Arkansas. And sure enough, there we were, right in the middle- New York City represent represent!! Though we were all from different places, we shared that same feeling of “its all happening.” The positive energy and excitement set a significantly different tone from the last time Phish threw a festival, and we could feel it in the air. The last time’s goodbye was completely overshadowed by this time’s welcome back. It was like hugging a friend you haven’t seen in 5 years and it felt incredible.

Now it was time to explore the campground. Though the temperature dropped to shockingly low temperatures Thursday night, everyone’s spirits were too high to allow the chilly weather to affect our mood. During our preliminary walk of the grounds we discovered, much to our dismay, the distance between each campground. Why the festival designers did this, I will never understand. It was a shame that we all couldn’t be raging together. But, looking on the bright side, we kept our spirits up. At least we would be getting tons of exercise… right? Yeah right.

Walking through Shakedown street, we noticed the lack of getting-downage. Rather, most people were just shaking from the cold on an astonishingly quiet main street. Phish plus California should not equal a weak Shakedown street. Jerry would so not approve.

Before we were allowed to enter the performance grounds, we had to submit ourselves to a search. Phish has been known to take security very seriously. However, in this case, people were being checked harder than an OCD girl with a clipboard and a to-do-list. As a result, unnecessarily long lines began to form, naturally annoying everyone. You know the golden rule to puff puff pass? Well that should be applied to Phish festival security: pat pat pass.

Finally passing through security, we were greeted by an iridescent ferris wheel emitting enough energy to light Times Square for a year- but boy oh boy was it beautiful. Right next to the ferris wheel was a giant screen playing a Phish DVD. The anticipation of the following night’s events was so high that a huge crowd in front of the screen commenced to getting down, raging and dancing to the DVD as if the phestival had already begun and the band had taken the stage. There were couches and hammocks set up behind the large crowd of people, giving off the vibe of an outdoor living room. It truly felt like a home away from home.

Continuing our walk, we came across a large tent decorated with red carpet, heat lamps, velvet couches, and strangely dressed mannequins. There was one dressed as a frog woman, a devil woman with boxing gloves, a feathered masked woman in a black cocktail dress, a headless Bloody Mary, and a topless woman with a pig mask. It was definitely a unique and unexpected way to decorate the path to the stage.

Once we were past the mannequins, we came across the Bloody Mary Bar- directly across from the 10 different beer stands that carried over 50 different types of beer on tap, including Phish’s own beer called “Foam.” Unfortunately they weren’t going to open the beer stands until the next day, so the taste-test would have to wait.

Since it was only Thursday, the guards were not allowing anybody to enter the main field where the Phish crew was setting up most of the facilities. However, we could see hundreds of personnel on the other side of the fence, hard at work in preparation for the following day’s festivities. Phans were staring in awe at the intricately designed structures, as if they were little kids in an amusement park sizing up the largest roller coaster the park has to offer. My friends and I felt a strong sense of anticipation, and could not wait until tomorrow.

After a very cold night inside our two-star tents from Target, we were ready to rage the phestival properly. Our first stop on Friday was the showers. These showers were hands down the greatest festival showers I have ever experienced. Not only were they squeaky clean, but there was steaming hot water AND great pressure. I couldn’t believe it. It’s amazing the difference that a hot shower can make at the start of a festival day.

After the pleasant shower experience we walked to the Certified Farmer’s Market for a quick bite. The market consisted of the most freshly harvested organic vegetables and fruit. My friends and I ate Pink Lady apples that I swear had to have been the same apple Eve passed to Adam. They tasted simply divine and fresher than any piece of fruit I’d eaten on the East coast. Then, it was finally time for us to head over to the performance grounds that we so badly wanted to explore the previous night. 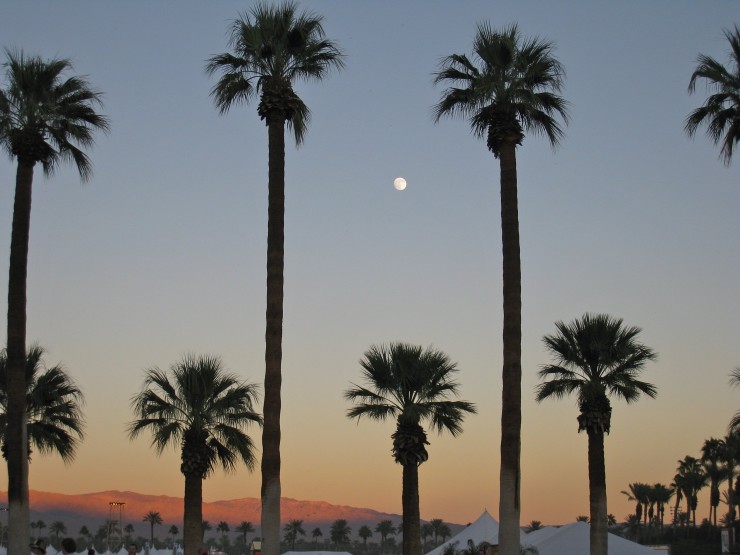 After a 20 minute walk in the scorching heat, (California’s weather has more personalities than a schizophrenic Gemini) we arrived at the performance grounds. Here, we encountered a huge line. When I asked someone in line what they were waiting for, they said they were on line for the gates to be opened so they could run to the front of the stage. It felt like it was 1964 and I was surrounded by 16 year-old Beatles crazed teenage girls. Phans had been waiting in line for over 4 hours, but finally they opened the gates. The stage was a football field away from where the line began and people were sprinting to the front of the stage. Not only did some want the coveted front row, but the festival had printed special, one of a kind, 3D posters that others felt were worth sacrificing their hard earned place up front for- as they split off from the sprinting crowd and headed towards the vendors.

Before staking out our spot in the crowd, we checked out the Burning Man-type structures placed in the middle of the grounds surrounding The Coil. This included a tall flower-like structure, a long row of dinosaur bones, a heart wrapped in spikes, and what looked like a jellyfish tree. Then we checked out The Coil. It looked like a giant dragon calmly resting on the grass. The Coil gave us a birds-eye view of everything within the performing grounds and proved to be one phantastic photo-op. Inside was one bizarre episode after another, as several wacky characters engaged in various peculiar activities- spanning from blood covered doctors performing operations, to imaginary tea parties with the host as the only guest.

Next, we checked out the House of Live Phish. Inside, there were tons of turntables, mixers, and headphones. The purpose of the House of Live Phish was to give phans an opportunity to mix and edit Phish songs in their own unique way. Imagine trancing out “YEM” or turning “Gotta Jibboo” into a hip-hop song. Though Phish does not show any signs of incorporating trance, drum and bass, dubstep, or house into their sets, the House of Live Phish is a way for phans to experience their phavorite band through many different genres.

After the House of Live Phish, it was time to try the specially brewed Phish beer, “Foam”, sponsored by Sierra Nevada. It was, to say the least, delicious. “Foam” is a German-style pilsner beer and it became apparent that everyone could not get enough of it. In less than 24 hours, “Foam” was completely sold out for the remainder of the phestival. Phish clearly underestimated a bro’s love of a good beer.

Finally, at last, the moment had arrived. It was time for Phish to take the stage and begin their first set. Countless multicolor lights- designed by renowned lighting director Chris Kuroda- surrounded the stage . In the stage’s background were bright, color-changing palm trees that seemed synchronized with the music. The sun had begun to set, and as we turned to watch, we were taken aback by the shadows forming on palm trees in a breathtaking mountainous landscape, that reminded us all how beautiful some moments can be. In that moment, it became clear to everyone why Phish chose Indio, California as their “welcome back” phestival location. This place was truly amazing.

Be sure to check out Part 2 by Drift Dodgers to read about the music at Festival 8!

The more I look, the more I find a growing body of evidence that time – both as it is experienced and as it is disclosed by science – is best understood as more of a loom than a river. Gathered here are just a few of the many independent programs that suggest that our ideas of cause and effect need to be drastically reworked.