They started slow, playing the obligatory, warming up, the consummate showmen, setting expectations low so they could blow them away. I saw a ‘Cycle of Belief’ on their faces as they sang “Party Time”, the only lyrics to the first song. Page and Trey were tongue-in-cheek, feeling awkward and silly, having trouble getting behind such a tune in their age and sobriety. You could see it in their eyes as they tried to have fun with it and questioned the prospect of the whole event – ‘Are we washed-up and cheesy, a nostalgic traveling jukebox pandering to drug-addled custies?’ Then they would look out at the crowd, see the joy and excitement on the kids’ faces, and remember what its all about – getting energized, into it all over again, feeling OG not old, remembering they helped invent this little world, that they can kill it if anybody can. It takes a couple of cycles back and forth before they settle in; I recognize it because I go through it myself in certain scenes at the ripe old age of 27. The first set was pretty weak, too many new songs – got em outta the way I guess. The second got better, nothing mind-blowing but played sharply, a rallying “Punch You in the Eye”, “Down With Disease” > “Prince Caspian” > “Wolfman’s Brother” > “Piper”, a decent “Hood” and a big “Character Zero” to end it.

During the music, there were bursts of fire flaring up from the towers to the beat, a 20-foot balloon airship lit up with LEDs floating over the crowd, a giant balloon cone that rose up at ambient moments, and fluctuating light schemes surrounding us- sensory overload! Not to mention the hilarious, creative costumes and characters that made the whole experience like a strange dream.

Things got interesting Halloween afternoon and we got some performances to remember. The third set of the weekend was highlighted by a smokin’ “Bathtub Gin”, with solid versions of “Divided Sky”, “Lawn Boy”, “Squirming Coil”, “Runaway Jim” > “Possum” and “Antelope”. For the Halloween set, they covered Exile On Main Street by The Rolling Stones, with Sharon Jones of The Dap Kings on backup vocals and a horn section – which I wish they’d use more often. This is the point in the show where my opinion deviates from most; I thought it was a bad choice, that it came out flat, forced and boring. All of the 18 songs on the album are very vocal-intensive, dependent on Mick Jagger‘s dynamic pipes. They were frankly butchered by the oft-off-key members of Phish, whose strengths have always been instrumental. I got the feeling they were just trying to get through the sections, and as the awkwardness grew, I went back to camp to re-stock. Be sure to listen for yourself.

I’m a Sticky Fingers man myself and admit I’m not overly familiar with Exile. After the first track, “Rocks Off”, the dance-boogie tunes were few and far between, and it put me to sleep because I don’t come to see Phish for love songs and ballads. “Loving Cup” is already overplayed and the novelty of them singing obscure classic rock wears thin after I catch my breath from the last jam. The Stones and Zeppelin are vocally out of their range most of the time – Jimi, Floyd and Talking Heads are my vote where covers are concerned. A lot of people loved it, critics and noobs alike – go figure! Taste is so subjective – there is no definitive good or bad. We can only offer our impressions based on our own experience and aesthetics. Most of the people I spoke to who had never seen Phish before thought it was a nice change-up with the horns and backing vocals. It clearly wasn’t for everyone though and the band knew they had to blow it up in the late-night set – which they did. 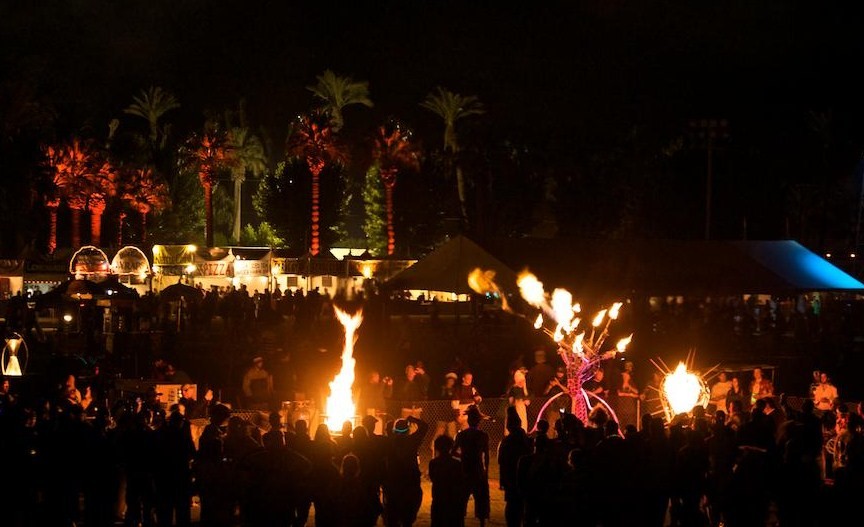 After we endured “Backwards Down The Number Line” again, they ripped a powerful jam out of it, as they do when they’re trying to sell a lame song. Right into a crisp “Fluffhead” and one of the hottest “Ghost”s ever – of course! After an extra-spooky “YEM” with a crazy vocal jam and fire flaming up from the towers that rose behind the rear speakers, they copped out with a “Suzy Greenberg” encore, ending early, short and sweet.

We wandered around, exploring the mad world we had created. Sick Burning Man-style art (Huge metal sculptures, interactive environments and fire-jetting sculptures and towers) dotted the landscape and legendary lighting director Chris Kuroda‘s design cast an ever-morphing glow on the rows of palms stretching out from the stage, encircling the concert field.

I was pessimistic about the first-ever Acoustic Set Sunday morning. It had been really hot during the day all weekend and I wasn’t sure if I cared enough about their mellow material to be into a whole set of it. I expected it to strike me the way the Halloween set did – self-indulgent and out of tune. Instead, they gave a sparkling and sentimental performance I will listen to always. The vocals were the best I’ve heard from them. The band focused on their harmonies and the sound engineer made them a priority in the mix. The set featured great versions of “The Curtain”, “Wilson” and “McGrupp”, and classic chillout songs like “Brian & Robert”, “Strange Design”, “Mist”, “Driver” and “Talk”. The set was a well-planned new take on some beloved tunes. 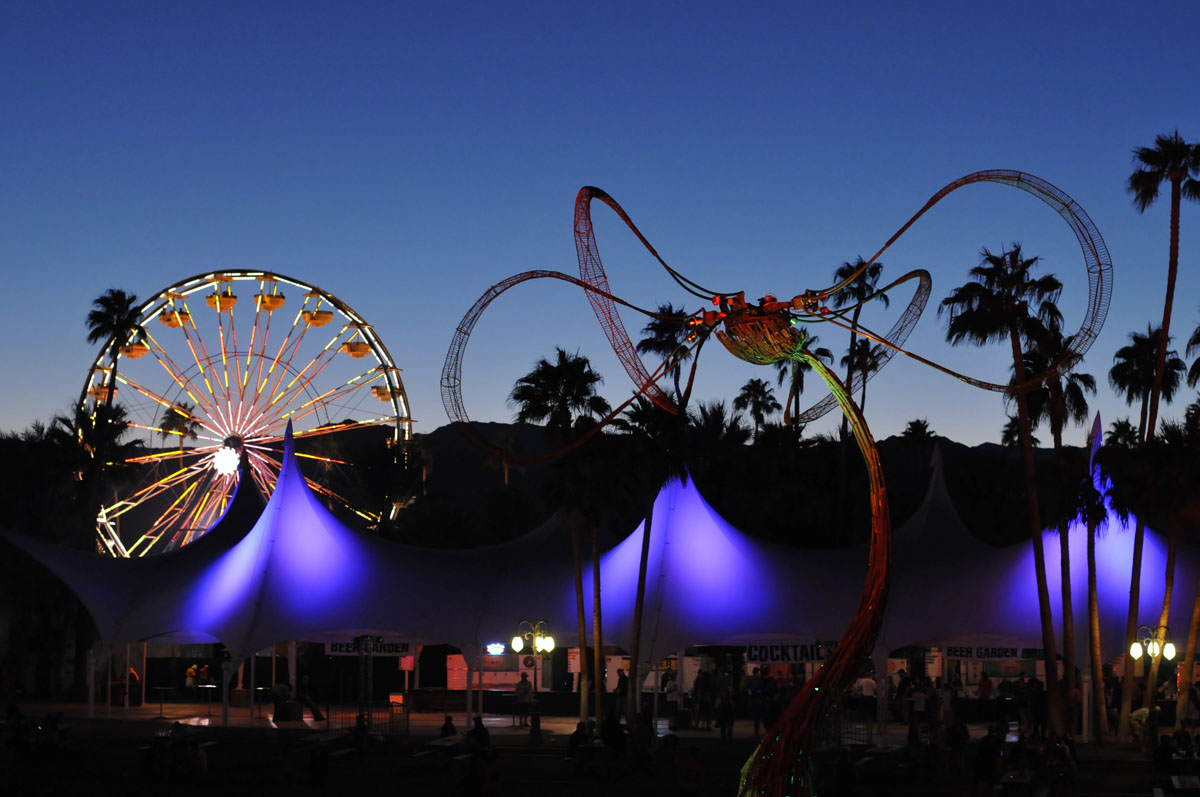 And then it was the final night of the festival – which had raced by and worn me out before I’d had a chance to explore half of it or see any of the people I’d wanted to see. Isn’t that always the way? Alas, we were in for a couple more face-melters, the seventh set blasting off with a poppin “AC/DC Bag”, “Rift”, “Jiboo”, then a slightly flubbed “Reba” with a great jam, “The Wedge” and a funky “Guelah Papyrus”, capped by the most twisted “Split Open And Melt” I can remember – one for the books.

The last set went Tweezer> Maze, Free, Sugar Shack, Limb By Limb, Theme from the Bottom, then a pumpin Mike’s Song> 2001, Light> Slave to the Traffic Light. It was dark and powerfully played with some really interesting explorations. At points I looked around and as far as I could see everyone was getting down as hard as they could, just lettin go – definitely the climax of the festival. However, “Light” is terrible and really brought the blistering energy down as it spiraled into an ambient jam that petered out.

“Slave” revived things somewhat, but it was clear the party was over and the band chose not to try and get it started again, going for an acapella “Grind”, the eerie bust-out “Esther” and predictable “Tweezer Reprise” as an Encore. After the incredible highs the set reached, most people were disappointed with how it ended. But we could not ask the band to sustain the incredible pace they built for most of Sunday night.

Overall they played tight and entertaining music, opening up more in their improvisations as the weekend wore on, as milestones were met and they became more comfortable. They tore it up with ominous minor-key jams that exercised the demons and lyrics about Pirates, Wilson’s execution machine, deep sea fish, getting lost in a maze, creepy carnivals, ghosts, dragons, witches and gloom rooms..

Their song selection was good, except for playing too many new tunes, the only one of which I like fully being “Stealing Time From The Faulty Plan”. Their new material is full of great parts and jumping off points made unbearable by painfully lame lyrics and poppy bail-outs. You can see why they’re enamored with it, but I’m not sure how much will end up in long-term rotation. The only tune I felt was missing is their most brutal, “Carini”…next year.

Festival 8 was far from perfect but full of special moments and unforgettable scenes. Phish may not be writing their greatest songs at this point in their career, but they are playing at arguably their highest level, putting thought, effort and rehearsal into their events and choosing their battles – special runs that they show up for. From Hampton to Camden to Bonnaroo, Red Rocks, The Gorge, Hartford and 8, Phish has delivered some epic moments in their return and New Years in Miami is sure to be another great time.

Be sure to check out Part 1 by OhWerd to read about the scene at Festival 8! 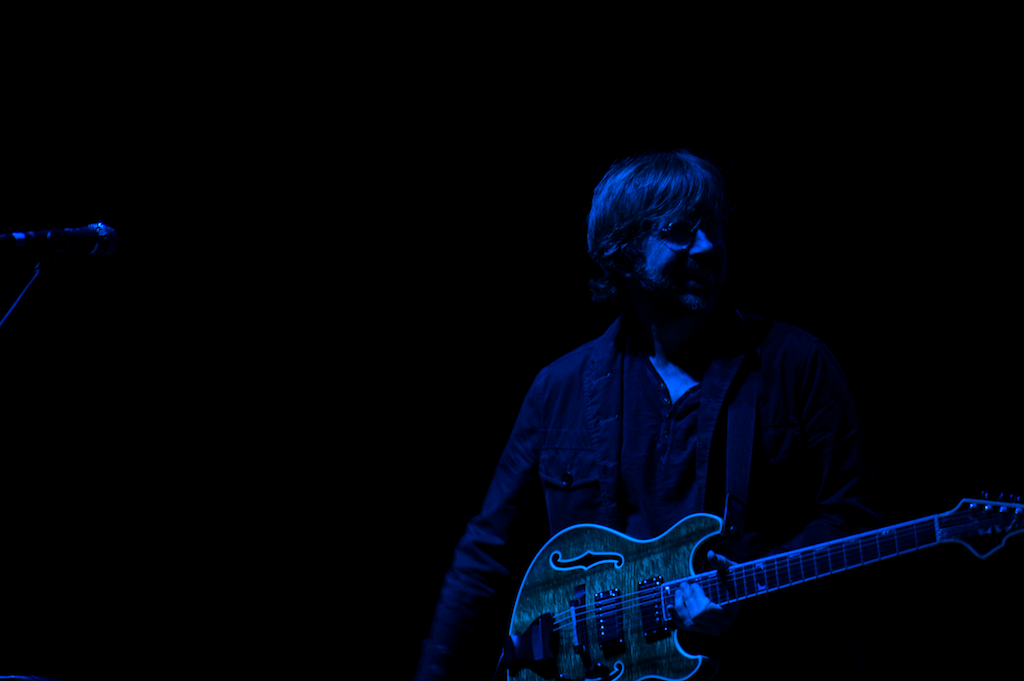 “It’s Friday… It’s almost the weekend…It’s a full moon….
You can download ‘The King of Limbs’ now if you so wish!
Thank you good people for waiting … Have a great weekend wherever you are….”
– Ed O’Brien