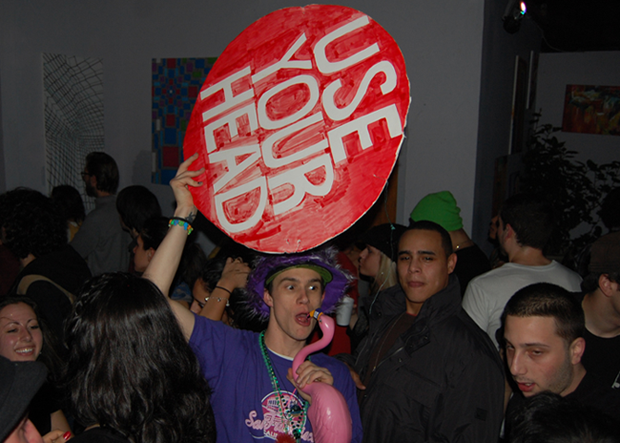 The launch was a huge success! A big thanks to everyone who helped out putting it together; the artists, the bands, and everyone who showed up. We kept that place packed all night and, judging from the pictures, people really enjoyed themselves. Musically, we were blessed some incredible opening acts and the legendary DJ Logic, BioDiesel, and a surprise performer on an Electric Wind Instrument, all collaborating together for a sick one time only jam. Take a look at the pics and leave some comments below. [nggallery id=33]

This show was more than just a show. It was an eclectic party that had all the elements to make it enjoyable, both visual and auditory. Paintings and photographs from some of our favorite artists adorned the walls, and live painting during the shows, the great people that showed up, the music (everybody killed it!), the costumes/rage gear, mind expansion, and the venue all created an awesome underground party- one of the best Brooklyn has seen in years. It got started around 9:30 and I was a little worried, with all the great shows in NYC that night, that our party wouldn’t truly get poppin until midnight or later. Fortunately, that wasn’t the case at all and there was an awesome turnout for the first band of the night, Jimkata.

Those guys did exceptionally well and sounded great, not letting their new album ‘Burn My Money’ do all the talking. Although I wouldn’t necessarily call them a jam-band, I don’t really know what to call them. Higher Nebulae kept the crowd moving all night with his set-breaks, and knows exactly what the crowd needs to hear at times. BioDiesel & Logic took the stage and the first set was great. It was very dancey and had a house type feel to it. Logic kept going during the break between BioDiesel sets and some people were questioning the sound. I can assure you that this had nothing to do with Logic himself, but the power/sound equipment of the venue. BioDiesel took the stage once again and played for another solid hour and a half. This set wasn’t as dance influenced as the first yet was more interesting to listen to. I would have liked a little more drum n bass but nonetheless the crowd seemed to enjoy it, and as Nobo previously stated it made for a perfect collaboration with the Electronic Wind Instrument. After the BioDiesel/Logic sets ended the crowd started to dissipate, creating the perfect environment for another Higher Nebulae set, with plenty of dance floor space to wile out on. The festivities ended around 5/5:30 in the morning, which made for a full night of raging. Here are the other set of pictures you’ve all been waiting on!

The venue was an excellent choice for a BK Launch party. The shuttle from the subway became very advantageous. The upstairs loft (where the party was held) was a good size for the amount of people that came, and had a fantabulous floor plan, with different small rooms to hang out in and plenty of couch space to rest on. If it was any smaller it would have been bursting at the seams. The bar was well stocked, yet a little pricey. You could hear the sound no matter where you were, and it sounded pretty good, a perfect volume. The best part about this spot was the outside rooftop. It was huge, well lit and overlooked Manhattan. I could see the Empire State building lit up in blue and orange (because the Knicks finally won a game!) and there were LED hula hoopers, smokers and people who just wanted a breath of fresh air. LiS will potentially be using 171 Lombardy again because of how successful the night was, and the friendliness of the owners.