We at Lost in Sound love music. Countless hours have been spent immersing ourselves within a community centered around innovative musicians on the front lines of creativity. Music on it’s own is a wonderful thing, but there is more to the experiences we all enjoy. Culture is an amalgamation of artistic endeavors, from dance to visual art and design to spoken word, and many more besides. The collaborative effort of creativity overall creates the environments we’ve come to cherish.

Lost in Sound hopes to expand the horizons of our readers by showcasing visual artists, performers, and entrepreneurs who have evolved around the sounds in which we all find ourselves lost time and time again. We hope to shine a light on the artistic contributions that support and glean inspiration from the music. Each month we will select one artist or performer to highlight with a brief interview and photos of recent work. We will also feature a playlist curated by the featured artist on Lost in Sound’s Soundcloud, to better connect the dots between arenas of creativity. 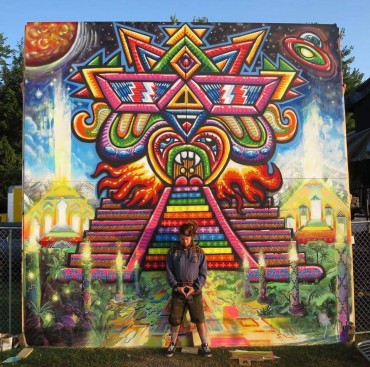 Lost in Sound is pleased to present our first installment of “Lost in Sound with…” featuring Chris Dyer’s Positive Creations!

Chris Dyer’s colorful Positive Creations can be seen the world over, from the walls of Berlin to skateboard decks in Montreal to canvases in New York. His globally inspired, feel-good style grew up between Peru and Montreal, inspired simultaneously by street art and ancient culture. Today, Chris Dyer travels the world, bringing positivity and making art wherever he ends up. We recently sat down with Dyer to talk about his artwork, his vinyl record collection, and what he listens to when he gets “Lost in Sound”

Lost in Sound with Chris Dyer:

[Lost in Sound]You have a unique style that combines several elements from different artistic schools of thought. How would you personally describe your style?

[Chris Dyer] Well, it’s about oneness. It’s about grabbing all of these many ingredients I love and making a stir fry that is a sum of its parts. I grew up between Peru and Canada, a child of the 80’s, a teen of the 90’s, when I started skateboarding and surfing. I love collecting music in vinyl form and old action figures. I also love to travel around this beautiful planet and I’ve been able to explore over 30 countries. And I have also done much inner journeying, too. So I combine many things, as you said, and I have many ways of doing that. In general my art is very colorful, detailed, and spiritual in nature. 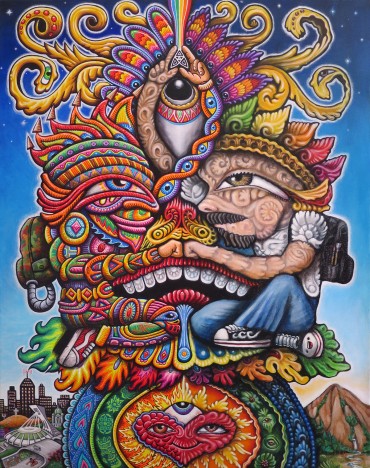 [LiS] Your art has graced a variety of surfaces, from walls to canvases to hats to skateboards. What is your favorite item to create on?

[C.D.] It depends on the time of the year. I think I do my best work with brushes in my studio, so perfect for the cold Canadian winters when I’d rather stay home. But if I don’t go out and bring myself and work in the streets then I feel a bit caged. The larger scale of street art is real fun and quicker and easier to do with friends and for the people, so in summer I would rather do that. But then I am always looking for new ways of taking my art to the next level, so trying new things is crucial. 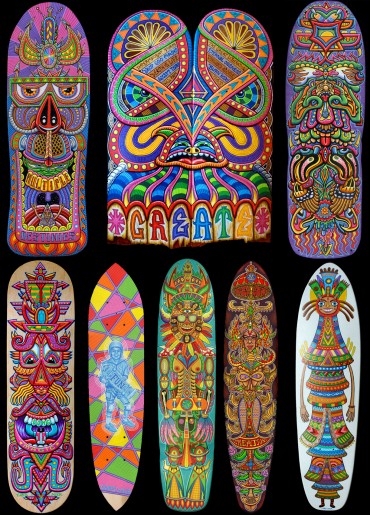 Some of Chris Dyer’s Skate Collection

[LiS] Your art has quite a bit of global influence. Please tell us about your experiences with the different cultures that you are inspired by.

[C.D.] Yes. I grew up in Lima, Peru and then moved to Canada. In my early 20’s I would work as a treeplanter as my summer job and that inspired me to start hitchhiking North America first, and later go around the world searching for new cultures to observe and learn from. I really enjoy checking out ancient ruins and of course the beauty of nature. Still so much to see but for now I am doing trips where I am called to do art, as my service to the vibes. 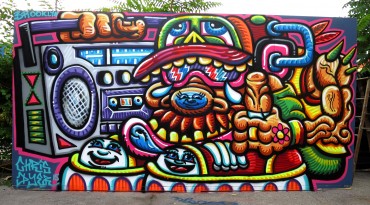 [LiS] You’ve had several works published in books and magazines over the years, including a coffee table book and an upcoming coloring book for adults. Why do you feel it’s important to participate in creative activities like coloring as an adult?

[C.D.] Yeah, I’ve been doing books since I was a young kid, it’s something I’ve always enjoyed doing and I’d say that is the culmination of what I do, like my art ph.d. of sorts. As for this upcoming coloring book, it’s a change for me to collaborate artistically with a wider audience. People will be able to access 50 of my best drawings and color them in their preferred way, not mine. My drawings can get pretty detailed so it’s a way to get people to see how hard it is to do what I do. Hopefully it’s fun for adults and kids to play with.

[LiS] You travel quite a bit. How does this affect your creative process?

[C.D.] It’s a loop feed. Trips gain me much new inspiration that end up in my paintings and then, because of those art pieces I am invited new places or can afford to do new journeys. I’ve wanted to be a travelling artist for a long time and am happy I’ve manifested that in my life, even if it comes with complications. 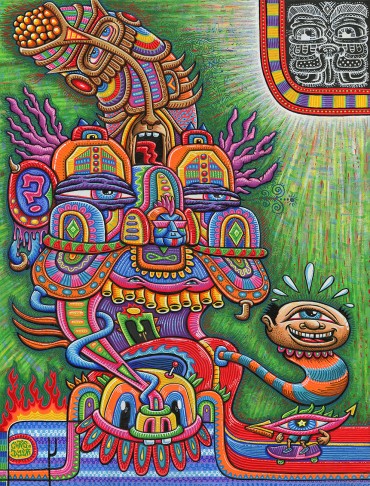 [LiS]Where is the most creatively inspiring place you have traveled to?

[C.D.] Berlin is a pretty fun city for street art and Miami is pretty wild during Basel times. But then you end up in a magical island like Bali and that also humbles the fuck out of you. All these “no name” artisans doing carvings and paintings that make us all look like a joke in the west. So many great color combinations in Latin America too. 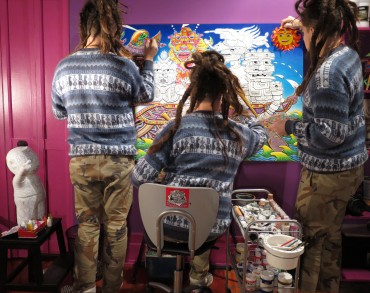 [LiS] Is there a message you’re hoping hope to convey with your artwork?

[C.D.] Sure! Love. Unity. Acceptance. Fun. Freedom. Open mindedness. Healing. In a nutshell, “let’s get together and feel alright”.

[LiS] You’ve been a collector of vinyl records for 15 years, and frequently don headphones while painting. What kind of music inspires you most?

[C.D.] Haha. The worst is when I use it to escape the music that an event can play, as many times it’s not really of my taste. I like all kinds of music though. I would say progressive rock is my favorite genre because it’s so positive and imaginative with lots of true talent. But I also love roots reggae, O.G. conscious hip hop, surf punk, 80s metal, jazz, fusion, dj beats, some electronic stuff, world music, etc etc. I find the best stuff is buried in vinyl, as new stuff just doesn’t have that same energy, to me. 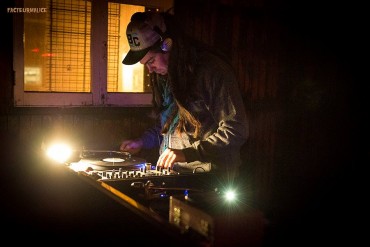 I don’t really hear much music outside vinyl. I do use soundcloud sometimes but not much, but I’ll try. I’m gonna be working on a new vinyl mix tape this winter, so please subscribe to my soundcloud and feel free to download my older stuff. Thanks!!