Dave Harrington is a world-class multi-instrumentalist and DJ, most commonly known by his role as DARKSIDE’s guitarist.  While he is taking the music scene by storm with Nicolas Jaar in DARKSIDE, Dave is well immersed with a rich music history of his own, and working on a solo project EP Before This There Was One Heart But a Thousand Thoughts as well.

I got the opportunity to chat with Dave earlier this week about crazy DARKSIDE tour moments, how his music education in Harlem as a bass player contributes to DARKSIDE’s distinctive sound, and how he would like to have a beer with jazz legend Miles Davis.

[LiS] How would you describe DARKSIDE’s sound to someone who is completely out of the loop?

[Dave] It’s the sound of Nico [Jaar] and I working in a room together. I guess if you’re out of the loop that doesn’t mean anything to you, but it’s the collision of two guys, with different musical histories, being open to experimentation and negotiation with all kinds of music. It’s the cross-friction of where noise, electronic music, and rock n’ roll can co-exist both peacefully and non-peacefully.

On that note, you and Nico [Jaar] have embraced that fusion of live instruments and electronic elements; do you think this new direction in the industry is keeping rock music alive?

I don’t think I’m qualified to talk about the trajectory history of rock n’ roll or the industry with a capital “I,” but one thing that is exciting to me is our moment in time and how music is navigating that moment. People are generally pretty open-minded about things on the musical landscape right now. 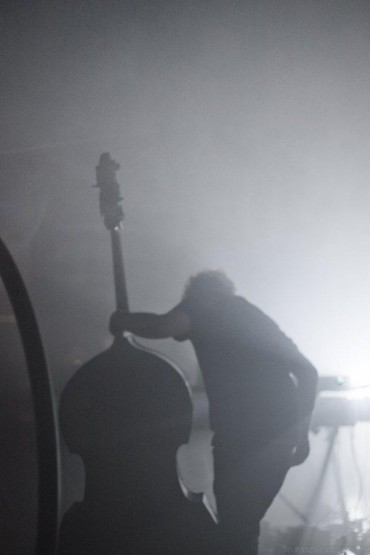 I read that you began your career in music playing the bass… How do you think your background as a bassist effects the sound of the guitar in DARKSIDE’s music?

I think growing up as a jazz bass player causes you to develop a certain way of relating to music where you become sort of the pulsing heartbeat of the band, and I was very dedicated to that mission as a bass player for 10+ years. That [my background as a bass player] affects the way I hear, listen, and respond, as well as where I position myself inside of the music; it forced me to go to rhythm, tambour, and tone first, before quantity of notes… Those are things I think about a lot and try to put into my guitar playing.

Are there any iconic guitarists or bassists that you grew up listening to and found inspiration from?

Some of the people I was most inspired by were my teachers. I was really lucky to grow up in New York City and go to an after-school program in Harlem where I got to study with some amazing downtown New York experimental Jazz players at the music school. Those [teachers] are some of my biggest, longest-lasting influences.

Was there a pivotal point in your life when you knew music was your path?

I never really thought about doing anything else; I just always did music. Every time I had a school opportunity to go full into just studying music, I never did. I guess the moment when I left school and decided to move home to New York to play music and see how it goes would have been the most pivotal moment.

Here’s a fun question I like to ask: if you could have a beer with anyone, dead or alive, who would it be?

Wow… There are so many people I would love to talk to. Since I’m still holding on to hope that maybe I will be able to meet someone who is still alive, I will put out this cosmic wish: Miles Davis. If I could even have Miles Davis tell me one sentence about anything… That would be great. 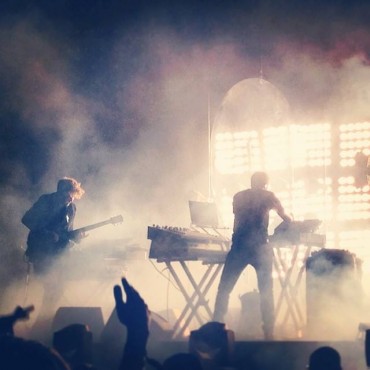 Is there any particular reason why; I know he’s a jazz musician, but why does he stand out in your head more than other people?

I have a lot of admiration for the way that he [Miles Davis] relentlessly evolved as a musician. It’s rewarding to continually go back to his discography and listen to how his music evolved, and how he was always pushing new things. He never seemed to get to a place where he was locked into “this is what I do now,” and stopped. It was always something new; I feel like he was always relevant and revolutionary to the music of the time in which he was living and playing. That’s not something you can say about everyone, because it’s not an easy thing to do.

What’s next for DARKSIDE? Do you and Nico have any future projects in the works?

It’s summer and we’re touring; we’ll work on more music when we are ready and when we can, but right now we are honed in on making this summer the best it can be.

You two definitely have a very heavy tour schedule this summer… I was looking over it earlier. What upcoming festivals are you particularly excited to play this tour? 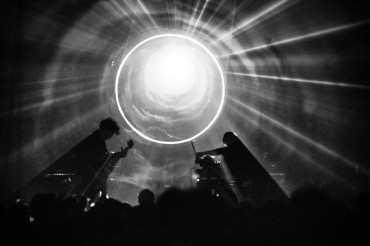 Festivals are such a rollercoaster that I’m just excited to be getting on that ride. I won’t play favorites, but there are a couple I’m vaguely sentimental about; in 2011 we played Nuits Sonores in Lyon, France and it was the first festival that I’d ever played with Nico. I’m excited to go back to that one.

I’m also really excited to play Bonnaroo, because I went twice, once when I was in high school and once during my first year of college. I got a friend, got a car, and drove down there [Tennessee]. I’m excited to go back [to Bonnaroo], because it’s one of the few festivals I went to as a fan and experienced full-throttle.

What’s been one of the craziest moments you’ve experienced on tour thus far?

We did a club tour in The States then in Europe, and were lucky to have the opportunity to play in different kinds of venues. We had this one show in Turin, Italy at Teatro Carignano, which is this beautiful 18th century harmonic-type theatre. We walked in to have an early look at the place [Teatro Carignano] after doing 15+ club shows, and decided we had to do something different that night. The acoustics in the room were made for orchestras, not techno or noise music and it was the first seated show we’d played in three months. We found this little mom-and-pop music store that had been in Turin for 30+ years; Nico [Jarr] got a small accordion, I got an acoustic guitar and we spent the new day practicing and building new pieces of music specifically for that night. Nico played the accordion while I sampled and manipulated it… And then we did this thing with the acoustic guitar and looping it, while Nico was playing piano. That was kind of crazy; I know it wasn’t this insane rock’n’roll moment but it was an exciting day to have this challenge. It was a really cool thing to do in the middle of a big tour. 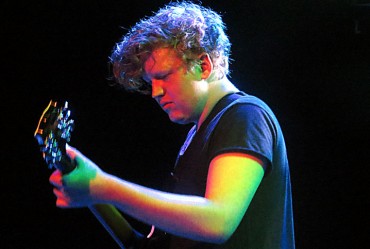 That definitely sounds incredibly improv… How did the crowd take to that [different classical style]?

I thought the crowd was really great. It took us a minute to get used to it, because we’re used to playing high-energy dancing, rock shows. This was really refreshing and fun to have a crowd that was just listening; we weren’t pushing to get people out of their seats and dance. We played like we would want to experience music in that room ourselves.

Do you plan on performing sets [as DARKSIDE] with that classic, acoustic instrumental style in the future?

Yes, in concert hall environments we tend to stretch, utilize, and improvise instruments and other elements.

Are you working on any side projects?

I have my EP coming out in a couple weeks; it just started streaming a week ago. I’m excited about that, because it’s the first thing that I ever put out under my own name, which is kind of crazy. I had this material around and played some stuff for Nico; he told me I should put out an EP so other people could hear it too… That idea hadn’t fully occurred to me. I’m trying to cover new ground with me out there alone, which is why I’m excited about doing this when I can. I’m not sure what will come of it; it’s not my main focus right now, DARKSIDE is, but it’s a new challenge.

What’s the name of the your new solo EP?

It’s a bit of a mouthful… It’s called Before This There Was One Heart But a Thousand Thoughts. It’s streaming through Other People, which is Nico’s new label, and it will be available on vinyl in the next couple of weeks. Nico was the executive producer, because he really helped me focus my ideas and pushed me to do it.

Stay in the loop:

Year after year it seems like our festival scene is growing exponentially. Huge pop acts,…