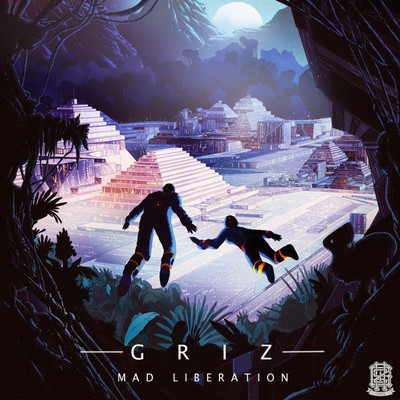 When I first stumbled upon GRiZ‘s new album, Mad Liberation, my preconceived notion was to dislike it…a lot. Since its roots of drum ‘n’ bass, garage, grime, and jungle; Dubstep has evolved and ended up somewhere between a rage bro’s YOLO hat and a PLUR queen’s tutu. Now, we see ‘dubstep’ used in virtually every commercial on TV.

The degradation of this genre goes hand in hand with increasingly poor quality – not only is the scene on a downward spiral, but the music is following closely behind. Some of the releases and artists that have the ‘dubstep’ tag, are a true disgrace to…say, what Benga, Skream, and Hatcha were doing in the south of London in the early 2000’s.

On a much more pleasant note, to my extremely delightful surprise, I caught myself crack a massive smile while listening to GRiZ’s new album. I felt a sense of nostalgia – like when I was first experiencing Excision‘s Shambhala Mix…in 2008 (There’s an added dimension when you listen to GOOD dubstep that the whole world doesn’t have on repeat).

This masterful production of exploding robotic bass shocked my nerves and tickled my ears. A lot of that can be attributed to a slew of instruments used from top to bottom. Horns, pianos, guitars, flutes, and even Dominic Lalli of Big Gigantic provides wonderful saxophone melodies and rhythms to support HUGE, groundbreaking, sonic-boom-womps.

Detroit native Grant Kwiecinski (GRiZ) is no stranger to blending genres either.  “See You Again” has got some hip-hop flavor infused with a wind instrument. “Smash the Funk” does just that, and “Rock n’ Roll” is so multifaceted it sounds like it’s played by a band.

In today’s overpopulated DJ world, versatility is atop the most important characteristics of being a ‘good’ producer. If you give Mad Liberation just one play through, it will be hard to have another word pop into your brain.

Regardless of the ‘tired’ scene and the ‘poser’ producers, in the end – music is music…and that’s why Lost in Sound is here…to sift through nonsense and spot quality. This album has surely passed the test. Oh, and you can download it for FREE!