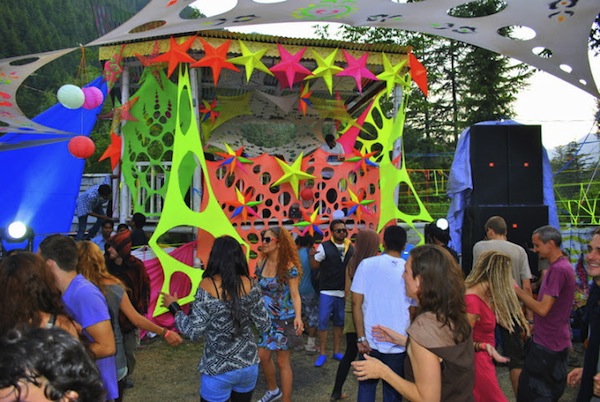 Traveling through India has opened my eyes to many things: electricity is not a given, anything you put in a pot of curry will come out tasting delicious, monkeys are not as friendly as they seem, and India loves psytrance.

After having traveled for about a month throughout India and being a bit starved for music other than sitar of any kind, we began to hear whispers from other travelers of a two-day Psytrance festival in the Parvarti Valley.

Sipping the uber sweet spiced milk tea known as chai in a smoke filled café, we decided that we should investigate the Shiva Squad Summer Festival.

Some of you may have never heard of psychedelic trance or psytrance as it’s known. The U.S. was somewhat of a latecomer to the EDM scene and thus trance and psytrance in particular never had the grip on the U.S. scene as it did (and does) in places like India, Israel, and Europe.

The genre features deep, pulsing rhythms that are meant to mimic the primal beats of shamanic rituals, effectively putting you in a trance-like state. Most tracks feature a long build-up during the first half, then taper off quickly in the second half.  Psytrance differentiates itself in being speedier than traditional trance with an average BPM of 140 to 150 and a pounding continuous bass beat. Trance has been big in India since the inception of Goa trance in the 1990s and was brought over to the UK and Europe by DJs such as Simon Posford of Shpongle and Hallucinogen. 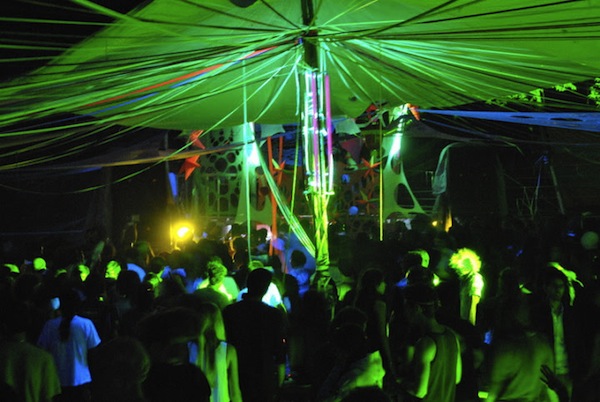 With that in mind, we arrived in the Pavarti Valley of India for the Shiva Squad Summer Festival, which we knew to feature a line up stacked with psytrance DJs from India, China, Israel and even Costa Rica. The Pavarti Valley is located in the state of Himachal Pradesh, about 350 miles north of New Delhi. The valley slices through the foothills of the Himalayas with snowcapped peaks dominating nearly every vista and winding roads on sheer cliff faces connecting the small mountain villages.

We had been in the valley tucked away in a chill village for about a week before we made moves to Kasol, where the Shiva Squad Festival was taking place. As the rickety Indian bus blaring Hindi love songs and decked out with tassels and signs paying homage to the Hindu gods of Shiva and Krishna pulled in, we heard trance music pumping from the windows and balconies of virtually every hotel. The streets were filled with people with dreads carrying poi and hula hoops, and as we got off the bus my foot crushed a leafy green plant and the smell of pot filled my nose.

Weed was growing wild, everywhere. It busted through cracks on the street, grew tall amongst bushes and invaded flower beds. Weed was literally a weed. Uncultivated and plentiful, it was everywhere. No wonder the valley is chock full of travelers flocking to taste the infamous ‘Malana Cream’ hash, some of the best in India and the world. With the smell of hash in the air and the eclectic mix of festie heads, we knew we had landed. 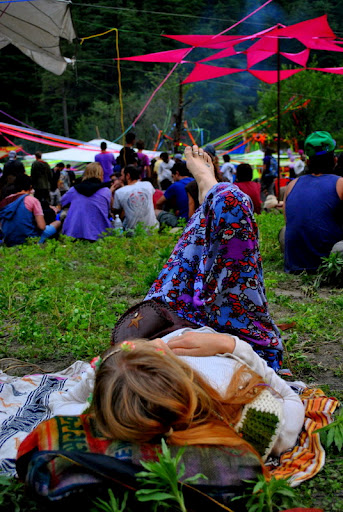 The Shiva Squad Summer Fest promised to be a professionally done festival featuring international acts from around the world, all of which according to their promo materials were ‘1000% confirmed’. After some chatting with other travelers who had been to similar ‘nature parties’, as they call the outdoor trance parties that are prevalent in Goa, a tropical party paradise in Southern India, and the Parvarti Valley, I learned that a lot of times these parties turned out to be loads of drugs and little music with a bunch of people tripping around a single speaker in the forest. The Shiva Festival promised more though; two stages, vendors, a bar, and most importantly, a chai stall.

Having agreed that two full days of trance would be too much, we arrived the first night of the festival after walking with only the light of a headlamp about a mile down a treacherous path that featured many stones and little room not to fall into the rushing river below. We scaled the last bit up to the entrance where many people milled about smoking and complaining about tickets. There were apparently some issues where people were made to pay twice to get in or where people didn’t realize they were going to have to pay more at the door than in advance. We breezed by these troubles and outfitted with our bracelets, went in.

Considering the festival was in the middle of nowhere in India, the Shiva Squad had done alright for themselves. Creative use of blacklights, neon furry string and ribbons had given the place the effect of a psychedelic playground; and as promised, there were vendors selling everything from sushi to momos (Tibetan dumplings) as well as merchandise and even a tattoo parlor. There were two stages, however, the smaller Alternative Stage wasn’t set up upon entry. There was even a ‘shanti’ (chill out) area where you could get your face painted and bask in the glow of blacklight paintings. 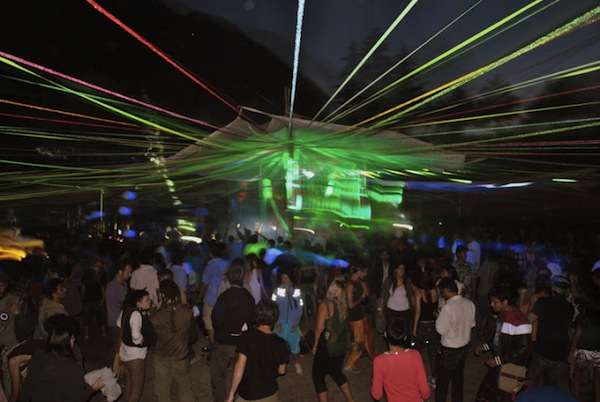 We got up to the Main Stage which was raised above the crowd on a gazebo and decked out with stretched neon canvas that looked somewhat like psychedelic Swiss cheese. The party was raging ‘full power’, as the Indians say. An international mix dominated by Indians, Israelis and a smattering of random nationalities including our American contingent threw themselves about on the dance floor in a dance pretty similar to the dubstepping we are familiar with. The music was fast and furious, and each song melded into the next bass pumping track.

After much trance dancing, we sat for a bit and up came a traditionally dressed baba. Babas are meant to be the holy men of India, swathed in orange robes and turbans. You will find them meditating on mountains and asking for donations in the streets. This baba, however, was different. He was a rave baba. He rocked up to us with his staff and turban and began raging it harder than anyone else on the floor. You can’t pass up a dance with the rave baba and we tranced. The baba, a man who looks like he stepped out of ancient times was raving full force, loving trance and its shamanic rhythms, waving his staff and stomping his feet.

All your usual festival personalities were accounted for: the guy chugging beer and inappropriately touching people, the guy who took too much acid and is shrieking through the crowd with his friends in close pursuit, the girl who looks like she’s having a religious experience, and the guys milling in the back who don’t dance but just bob their heads, and the omnipresent fire spinner. She spun these curved Japanese staffs and ran up to the crowd thrusting them in our faces with a manic grin on her face. The inappropriate drunk guy made his presence known by trying to touch the fire and was pulled back by the crowd. 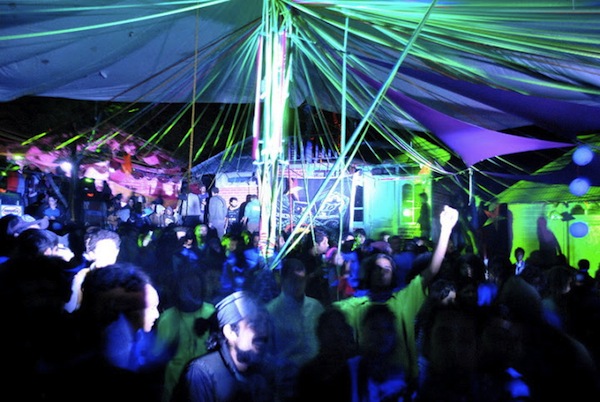 Wandering around we landed in the ‘Shanti Place’ and sat getting our faces painted by headlamp and drinking the glycerine-filled (yes that’s right) national beer, Kingfisher. Everyone sat around smoking the giant chillums that are the preferred method of hash consumption in India, while another rave baba wearing robes and a sombrero rimmed with tinkling ancient coins recounted the story of the previous weekend’s party where two people had been hospitalized due to acid freak outs.

The party went to the wee hours of the morning with DJs well known in the trance scene, such as Russia’s Psykovsky (Osom Music, Tantrum Records) and C.P.U. (Nutek Records).

We landed late night in the food/chill out area which was filled with pillows and thin mattresses. In India, chairs are not common, and you will virtually always sit cross-legged on the floor backed by a sausage shaped pillow. Our fire spinning friend appeared in her leather bra and began discussing how much she loved getting her breasts rubbed. We tried to politely change the subject and were saved by the Russian man lying on the floor, who up until this point had appeared passed out but woke to discuss his love of Psykovsky. 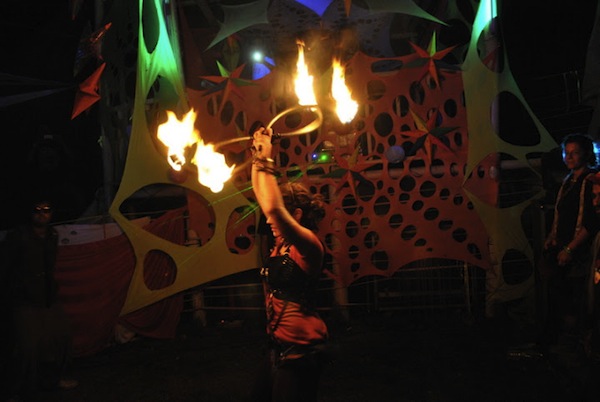 Figuring that weirdness was a good note to end the night on, we left by the same hair-raising trail we came in on.

We returned the second night for Round Two. By now the Alternative Stage had been set up, and a local Indian band featuring about five people and traditional instruments was singing Bollywood-esque songs. This cultural taste was cool, but it was a bit of a disappointment to those of us who had expected electro-house and chill-out beats as they’d advertised.

The second night scene was very similar to the first, with people looking slightly worse for wear and a few people nodding off under blankets. However, just as it seemed people were gearing up, something happened that reminded me of my high school days in New England.

We were chilling in the food and pillows area when one of the festival workers stuck his head in and shouted, “Cops are coming! Everyone be clean!” Since I’m no longer sixteen, I just sat tight. Minutes later about ten cops rushed in, decked out in stylish caps and khaki uniforms. They rushed up to my boyfriend who was relaxing with his eyes closed and commanded he stand up. They then questioned him on what he was doing with his eyes shut and told us to get out of there. Feeling like the naughty teenagers of yore, we left.

I’d say for a party in the middle of the woods in India they brought it pretty well, and it ended as all woods parties must, with a cop bust.