Celebrating 10 years since its birth, Symbiosis Gathering is turning every knob up to 11. Truly, the variety of performances, workshops, activities, art exhibits, and shenanigans, (in this case not just a humorous term but an actual lineup category involving participatory improv comedy) is astounding and unparalleled. Perhaps intentionally… the staggering amount of activity is quiet overwhelming, discouraging over planning and lending to a more go with the flow approach. That said, a proper overview is necessary for a festival of this caliber in order to define the full scope of magical happenings that will be going down! If you haven’t already, you should probably take a gander at the Field Guide. This 68 page beast of a pamphlet is so action packed with info that you need instructions just to read it (hence our article).

Find the 2015 Field Guide HERE, might as well have it handy while reading this overview.

Centered around the concept of participatory improv comedy, Shenanigans consist of all sorts of ways to get weird and laugh while you are at it. These activities may consist of stand up and sketch improv comedy like The Hot Boys [Fri 8:30-9:30PM & Sat 8-10PM], or possibly furry roller coasters and toothbrush-driven dance floors (yes, you are supposed to be confused) that will be found at The Cool Kids Club presented by Fungineers and Bubble Gutter [Sunday 8-8:30PM]. Or if those don’t tickle your fancy, perhaps change the channel to Playa-born The Saloon Ensemble where conceptual live musical meets informative documentary meets some sort of swingy jazz lounge. Can’t really be sure what to expect from these folks most of the time, but on Friday night they will be performing “All of Burning Man in a Day,” an interactive musical experience… in 3D! If any of this was easy to digest, it wouldn’t be called Shenanigans now would it?!

A single paragraph on workshops at Symbiosis?! Is that a joke? The number of activities that fit into this category nearly outnumber the artists on the musical lineup. You could go as far as saying that Symbiosis is just as much of a educational retreat as it is a music festival. This concept is one of the beautiful things rising from the evolution of what many refer to as the transformational festival scene. These classes and presentations provide an opportunity to shift the attention of these gatherings away from dance-floor centric rage-athons, towards a more intentional and healing agenda. To give you a rough idea of the kind of things you might expect, here are a few random examples: 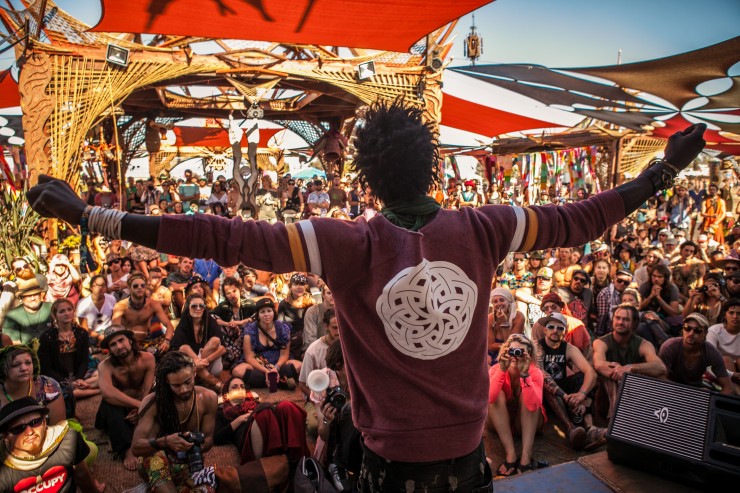 So hopefully by now you’re starting to get the picture? If you are attending Symbiosis, you better be thinking outside the box when it comes to your expectations! If one day you find that interactive comedy is overwhelming, or thag intentional classes isn’t your vibe, perhaps you will want to check out one of the spectacular mind bending performances that will be happening throughout the course of the weekend: 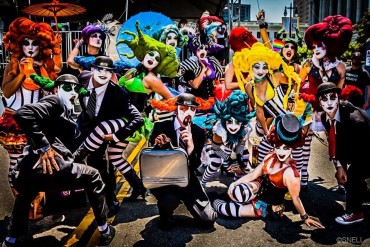 Iridescence: A Mermaid Tribe – These mermaids and mermen will be flopping around swimming, surfing, diving and displaying a multitude of other outlandish aquatic skills at their water stage!

Vau De Vire Society – Anyone who has been to a music event in the bay area knows that people here, well, dance weird. In general… we like weird, A LOT. Mixing various dance styles along with circus sub-cultures, The Vau De Vire Society have crafted their own world of freaky, fun, and awe-inspiring performances. Leaving conceptual stage-audience relationships behind, they lure you into their domain.

These are just three examples from a long list of beyond imagination happenings throughout the week. Seek the field guide for more info!

We purposely left this section for the end. We figure that one probably doesn’t need to read a preview article to figure out that incredible music will be going down at Symbiosis, and we hope that by this point you have a much broader image of everything that is a Symbiosis experience. THAT SAID – there are a few things that we can’t pass up mentioning. To be crystal clear here… we are very carefully cherry picking the next few topics and broadly leaving out many of other significant acts and performances that you probably do not want to miss!

No, your brain is not playing tricks on you. One of the most prominent headliners is indeed missing from the schedule. Symbiosis is pulling some sort of magic trick with his performance and have decided to keep fans in the dark until they arrive on site. “Yes Tipper is not in the schedule. Yes he is playing. Yes it will be super special. Tune in on site and you’ll find your way home! ” (Symbiosis Facebook Page). Just last month Tipper played a next level three night themed run in Chicago. The first night featured a downtempo “Journey” set while the second night was a floor shaking uptempo set. Finally, he closed out the run by presenting his 3rd ever chill out ambient set, encouraging fans to bring blankets and pillows and form a big cuddle puddle on the dance floor. Tipper has been a game changer from his inception, always finding ways to be innovative and reinvent both his sound as well as his live performances. It would be impossible to even begin to make guesses as to what he might have up his sleeve this time, and I’m not sure we should even try! Perhaps we can all just try to keep an open mind and see what the cards hold for us, eh?! 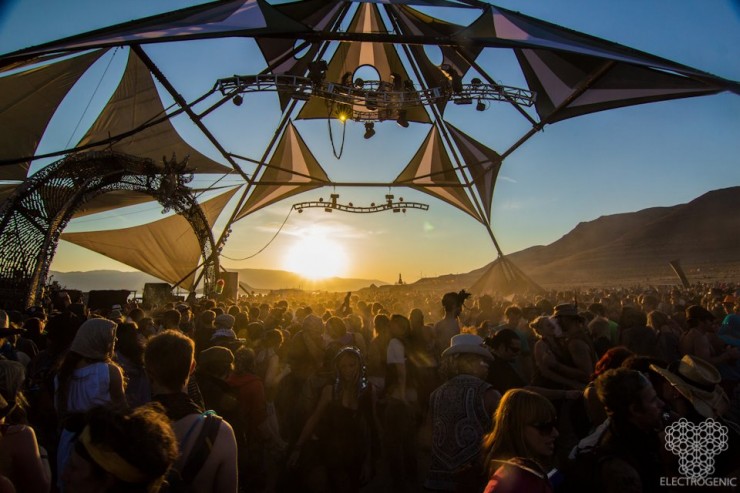 Symbiosis is well known for not just crafting a stellar lineup, but bringing to life new music the world may have never heard before. Sticking to their traditions this year will feature the first ever performance of a CocoRosie Side project. “Future folk sister duo and Symbiosis headliners CocoRosie will be celebrating the release of their new album at the Gathering with its first live performance as well as the debut of side project Bianca Casady & the C.I.A. This new project revolves around Bianca’s first solo record which begins with the tones of a 100 year old untunable piano and the stabbing of dusty typewriters. The live performance encapsulates these atmospheric arrangements with dance pieces and projections of spooky images creating a unique, interactive experience. The debut of this project continues Symbiosis’ tradition of offering a truly internationally curated creative experience.” – Infamous P.R. Press Release

Before The Glitch Mob was even a thing, Edward Ma and Josh Mayer were performing under their solo projects edIT and Ooah. Their respective debut albums, “Crying Over Pros For No Reason” and “Of Porcelain” were monumental in the formation of glitch-hop music and the various styles that stemmed onwards from there. So much growth has happened since those times, but this year for the first time since 2009 fans will be treated to a special old school set, at sunrise no less, to pay homage to where it all started.

This high tempo and deeply psychedelic genre of electronic music is rarely found at American festivals. This is interesting because historically speaking, psytrance is one of the oldest styles of electronic music, born from the depths of Goa, India back in the late 80’s and early 90’s. When one looks at other well-known gatherings across the globe that share similar vibes and intentions – Boom, Ozora, Rainbow Serpant, Cosmic Convergence, Universo Paralello, Earth Frequencey… the list goes on – psytrance is predominantly what one would find blasting through the sound systems. In fact, at these festivals the downtempo bass music that is more prominent here in the United States is usually only found at the “chill stage”, provided as lounge music for people mostly hanging out and not necessarily dancing much.

Being high-intensity and at times abrasive, psytrance may not be everyone’s cup of tea. That said, if approached with an open mind, its meditative entrancing properties can provide a deep and healing experience. Most of these performances will be taking place at The Grotto stage. This year Symbiosis is showcasing some of the biggest and most respected names in the global psytrance scene. Artists like GMS, Tristan, Avalon, Killerwatts, Perfect Stranger, AJJA and EMOK are old school pioneers that helped shape electronic music as we know it. On the flip side of that coin, artists like Smoke Sign, Tetrameth, Merkaba (Australian sacred bass producer Kalya Scintila’s alter ego), and Kromagon will be displaying relatively newer progressive trance styles which are more experimental and can have varying elements drawing from funk to tech to ancient spiritual spaces. 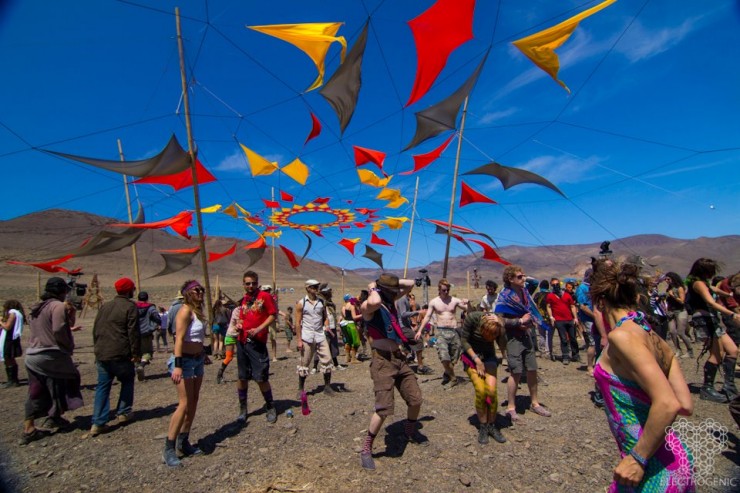 At Lost In Sound, we greatly appreciate and encourage cross pollination of cultures. If you are feeling curious, we suggest approaching with an open mind. Trance music can serve a different purpose than dance music. It is said that with downtempo music the audience is united in its individuality, each person beautifully crafting their oh-so-personal style of expression, journeying outward. With trance music the dance floor is united not so much in expression but in tapping into the collective energy that is harnessed when a crowd of people follow a singular pulse, journeying inward. Find that four to the floor tribal stomp and get in the zone!

Symbiosis generates magic of exquisite caliber. There is much playing, dancing, laughing, and smiling to be done! Hopefully also some healing, learning, gifting, and loving too. Journey well, friends, and remember – USE YOUR HEAD!

and Kyle Rober of Fractaltribe.org

Get ready to rage…. in style! The organizers of What the Festival, located 100 miles…