Performing arts and music have always gone hand in hand, but in recent years this combination has been making its way to the front and center of music festivals and every kind of art event one can imagine. While fire spinners and acrobatics have always been incorporated into live music performances, it wasn’t until just a few years ago that we started seeing groups like Quixotic and Lucient Dossier Experience listed as headliners at festivals. This seems to be especially true on the West Coast where Burning Man culture runs so strong.

Enter Cerebellum Projekt – A bay area performing arts and multimedia group that bring an “ambiance of electronic music soundscapes that will transport you through a journey of psychedelic mysticism.” They perform all original skits as well as produce their own music. Founding members Madamn Burnz and Alex Veterano started performing as Cerebellum Projekt in 2014 and have been performing both circus acts and music sets at all sorts of events from festivals like Santa Cruz regional burn Unscruz, to local weekly events like Wormhole Wednesday in Oakland. Most recently we caught them performing along side Desert Dwellers and Kalya Scintilla on their Earth Heart tour. We dug what we saw and thought we’d sit down and ask them a few questions. 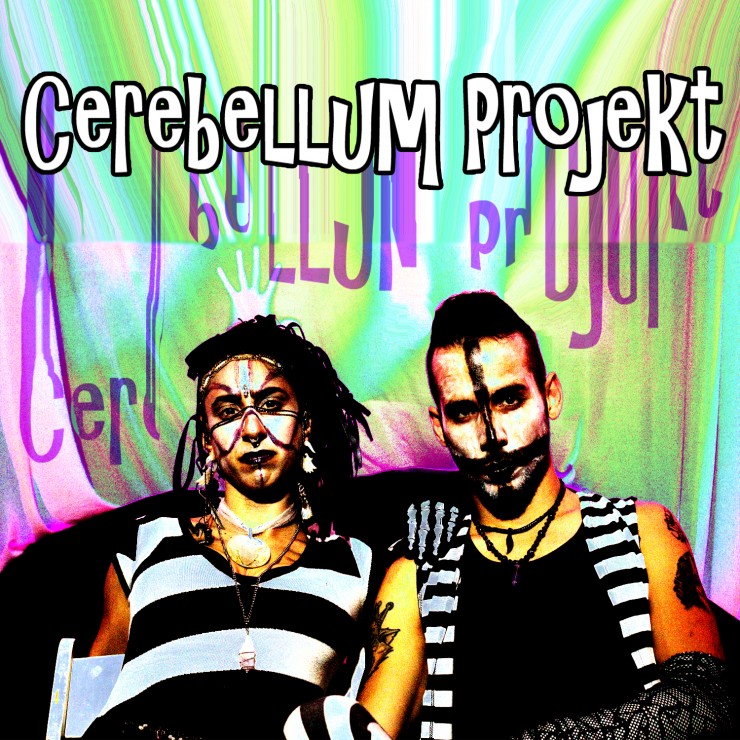 [LIS] Set the scene for us – What drew you to performing arts? Where did the idea for Cerebellum Projekt come from?

[Madamn Burnz & Alex Veterano] I (Veterano – born in the Bermuda Triangle, Puerto Rico) have been inspired by many forms of art and artists, primarily by Michael Jackson at age 4. Driven at a young age, I was singing/dancing in talent shows and school gatherings. In my teens I secretly studied occultism through books like the Necronomicon and HP Lovecraft literature which inspired some Metallica songs (my favorite band). During the next 20+ years I formed rock bands, reggaeton duos, electronic projects, organized events, acquired Pro Tools and Logic Pro certifications and opened a music studio, where I have worked as a music producer for known artists like Berto El Original from Trebol Clan. A few years after my relocation to California from Puerto Rico, I discovered the Burning Man culture. During these years through entheogenics and diverse spiritual studies, I became a Solitary Witch.

My (Madamn Burnz) inspiration spawned from my initial encounters with the element of Fire; despite my peer’s chagrin, I was drawn to putting flames in my mouth. Some of my first steps were upside down, walking UP stairs on my hands. Performing has always been a natural route for my freak show oddities. Through the years I’ve experimented with various alter egos, refining and representing archetypes as studied by my lifelong practice of Tarot. 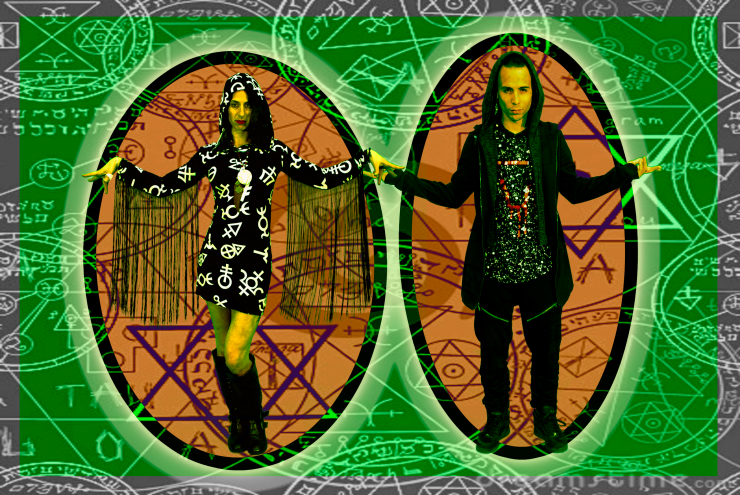 Cerebellum Projekt was formed through our entheogenically blessed union 3 years ago at the SkyHigh Odditorium. As pagan warriors of the occult, we combined our skills of music, circus, and theater to bring messages to the World in ways it has never seen or heard.

Talk about a few milestones either personally that lead to Cerebellum Projekt coming to life, or key moments for Cerebellum since you’ve formed.

Our first main stage festival performance was at a secret Take 3 Presents event in 2014. Deeply inspired and connected to the underground culture and community, we decided to produce a series of events at the Skyhigh Odditorium in Oakland. The events were interactive performance oriented events called the DragonShell, where we featured local music producers and performers. The year 2014 culminated with our first co-produced aerial theater show, the ELEMENTales, featuring Madamn Burnz’ aerial students, the “Aireal Alchemists.”

In 2015 we began bringing full stages of music and aerial performances to local events, such as SF Precompression, How Weird Street Faire, and Superhero Street Faire, events to which we continue to bring stages, expanding this year to a full Circus Alley at How Weird. Our 2015 spring-summer tour included festivals like Unscruz, SoultruisticUnscruz, and Burning Man. In the fall we released our first EP Sacred Fortune independently, and performed a variety of local shows around the bay area.

Our next year as a group was based around our 2nd full length aerial theater production, the TAROTales. We toured with various members of the cast across CA to different festivals performing main stage shows at festivals such as Raindance, Good Vibe Tribe, and Organic Fest. In the fall of 2016, we released our 2nd EP TAROTales Vol 1  and 2 music videos: Fortune Teller and Rites of Passage Pt. 2. 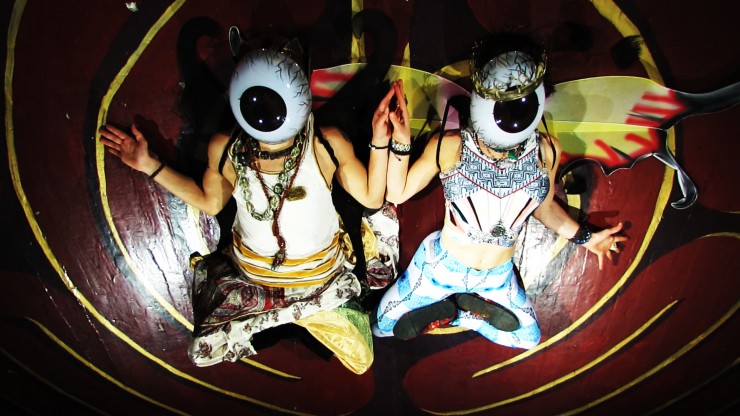 What does your creative process look like? How do performance or music ideas get from the chalkboard to the stage?

We always begin with the elements of concept, intention, and emotion, and various technical skills we’d like to present. When creating music we lay down chords on a scale that will transmit the feel we want through the sounds of the synths. Madamn gravitates towards outboard synths such as the Motif XF6 and the Novation Minivova, and Veterano balances the equation with his expertise in MIDI synths. The music pieces come together through our collaborative respective positions, independently and harmoniously bringing our ideas to the table. As a Pro Tools and Logic Pro certified pro, Veterano professionally mixes the tracks once all the ideas are manifested by both of us.

As performers and also musicians, how would you describe your relationship with the audience?

Our relationship with the audience is the basis of our performances; our interactions on and off stage are of utmost importance because they are mirror reflections. Imagery is powerful, and we use it to bend perception and reality through our fans’ audiovision sensories. In magick, images are used in many powerful ways, so we use our image in the same way to convey our entheogenic, mystical and occasionally controversial messages.

When do you perform music sets? I imagine being a performance group you have to find the right kind of events to share your art. How do you find the right events, what do you look for, and what attracts you to those events?

We perform music sets when the venue limits aerial acrobatics or fire eating. For example, for our shows at Wormhole Halloween and Freaker’s Ball, we did three acts from Sweeney Todd: The Demon Barber of Fleet Street as “Madamn Todd and Alex Pirelli,” with the performance ending in a pool of Pirelli’s blood. 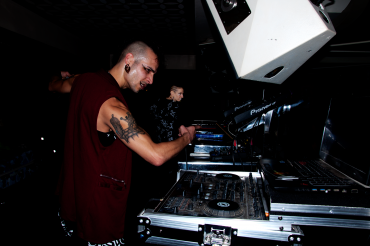 These past three years, we have done almost all of our own bookings. We continually form alliances with producers who share our artistic vision, seek relationships with like minded artists, and hustle organizers from events we’ve enjoyed. Deeply inspired by the entheogenic culture, we favor events with transformative and spiritual messages, that welcome performance, and feature progressive electronica music. However, we enjoy performing at a wide range of venues for diverse audiences, such as private museum and art gallery fundraisers. Booking is something we work on regularly, following events on social media, researching festivals and venues, and keeping our eyes on the goal – to spread our message around the world, beginning with our local audience, and moving outwards to reach the international community, one stage at a time.

What does the future hold? Where is this all going? Where do you hope to be five years from now?

Musically, in our near future we will be independently releasing the TAROTales Vol.2 EP, a single through Wormhole Music Group and another through Creative Consciousness. We are additionally planning to release our solo electronic music projects. In performance, we continue to play around the West Coast throughout different gatherings and festivals. As leaders, we are in charge of the Circus Alley at How Weird Street Fair, where Madamn Burnz will be managing 80 people with the assistance of Veterano. This group of people is composed of circus performers, musicians, DJ’s, dancers, sound techs, light techs, etc.

We see ourselves continuously releasing music and videos to increment our popularity and tour worldwide. We plan to tour internationally and are planning on presenting our art in the form of performances, music, and workshops. We are continuously inspired by the evolving underground art community, progressive electronica, experimental music, theatrics, improv circus stunts, technology, extraterrestrial beings, and the occult.