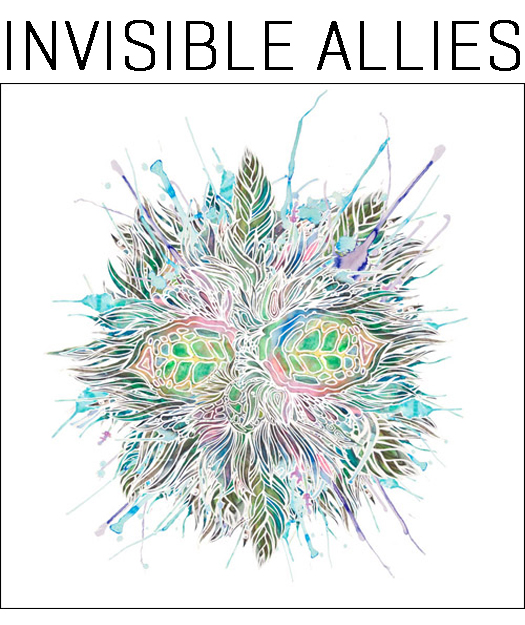 “Invisible Allies is the collaboration project of world-renowned producers Bluetech and KiloWatts. This powerhouse duo will hit the road in February to embark on their first US tour in support of their “Hyperdimensional Animals” EP that came out on November 30 2010.  Both producers achieved highly respectable cult status in their individual careers for their masterful technical abilities in the art of music production. Now, Invisible Allies is the catalyst that is pushing both artists into the next stage of their creative potential.  The tour will feature individual opening sets by KiloWatts and Bluetech, performing the music they are so well known for, and then a headlining Invisible Allies set consisting of an entirely custom built, live audio/visual experience.

To celebrate their upcoming tour, Invisible Allies are giving away a free track from their recent release, ‘Hyperdimensional Animals.’ See the tour information below and click the link for your free download of the track ‘Turquoise Rain Chant’ by Invisible Allies.”

“Ghost Bridge” (9:42) – Reverberating, hollow, dulcimer-like plucking sounds. Begins with an intro as another layer of echoing beats enters. Twisting sounds like a windup toy that release like a slide whistle. About one third into the track there is a breakdown with strange sounds like alien crickets and beasts from the planet Pandora. Everything speeds up to double time as it sounds like something big is flying overhead. The hook is really soothing as Bluetech’s presence is heard through the wooden xylophone progression. Almost sounds like a futuristic version of the world music compilations you’d find at a rock shop inside of a mall labeled, “Forest.” Heavier bass drives relentlessly. A second breakdown signified by a growl similar to when Neo plugs into the Matrix. The beats are anything but organic as there is a rallentando back into the beginning progression accompanied by a fresh set of beats engulfing. Talk about psychedelic, this track alone is more intriguing to the subconscious than some full albums of music.

“Ghost Bridge (Mr Projectile Remix)” (5:22) – Much more House, arpeggiated original beats, some more ghostly sounds added. From downtempo to almost head banging. Pretty sick to be able to detect the same original track but still have it sound so much different. The producer from Santa Cruz, Mr Projectile, tastefully maims the original hook and stretches it as he pleases. Halfway through the remix there is a really haunting reverb section that brings out the dark side of the force in this track.

“Harmonic Tectonics” (8:05) – Subtle, very low bass base. Crescendo of dings and repeating squeaks that sound like a rusty bike wheel. I find my mind moving from layer to layer and back again like I do listening to so many of Bluetech’s productions. Ethereal, wispy vocals. The Allies let the steam out thick for a few seconds. Kilowatts’ sounds very industrial and electronic as the high hat and snare sounds trade off. The duo slowly releases the listener from the pleasantly chaotic sounds before pulling you back in abruptly. It’s like holding your breath to see underwater and coming back up for every so often for a little air. The final minute of the track is a barrage of high pitched screeching harmonics that fade out to a dissonant moan.

“Harmonic Tectonics (The Great Mundane Remix)”  (5:27) – Sounds like the inside of an eerie cathedral. Far away knocking of the pews by a pair of heavy soled shoes kicks the song off. There are a plethora of buzzing sounds and bass synth patches in this remix that pan from one speaker to the other. Some of the original track’s layers are slowed while others are more sped up. It’s a reversal that creates an almost unrecognizable result. More manic and sporadic. Sweet rapid fire sounds like a drumstick tip tapping on a high hat.  The end of the song is an insane build up in which I feel like I just stumbled upon a bomb set to detonate.

“Turquoise Rain Chant” (6:24) – The Rain Chant is an appropriate name for this free fall of beats. A sultry bass line lays down some funk to transition into an expanding network of tribal rhythms and mystical resonance. Various static samples are thrown in that almost sound like prayers or whispers. Hard not to be moved by the sudden buildups and energetic breaks. Kilowatts and Bluetech’s styles mesh wonderfully in this song. This is what the collaboration is all about, making it rain and puddling the masses with music.

“Turquoise Rain Chant (Erothyme Remix)” (5:14) – Nice addition of delay in the beginning to create a different rain effect. Ott style bass wobbles and glitchy percussion make this remix much more dubby. I can visualize Erothyme going to town on the knobs and keys of his midi controller during the middle of the track. I would think that it’s a pretty safe bet to dub out any of these Invisible Allies tracks.

“Techniculus Funkularus” (6:25) – With a song name like that, I know this track will represent both artists. Bluetech provides the driving downtempo force as Kilowatts adds clean and pounding breaks. Many of the beats echo back at you, and as things slow down the music becomes more organic and harp-like. You can almost hear how there is a split in the music where one musician handles one aspect of the production and the other is controlled by his counterpart. I would say that there are points in this song when the combination of styles doesn’t impress much but the last ninety seconds of the song does fill your ears with some Tipper-like synthesis.

“Techniculus Funkularus (Bil Bless Remix)” (5:08) – Begins slowly, opens up like a purring hallucination. Sounds like rapping on a tin can, truncated moans, loving the fuzzy reverb. Seriously almost sounds like two Macintosh PCs are giving each other a naughty rub down. (2:08) Short breakdown into a barrage of breaks and sonic rips and tears. This remix is much more interesting-a complex and full sound. The occasional soft piano progression pulls the mind back to reality if only for a moment. One of my favorite tracks on the album, beautifully produced. Bravo Bil Bless.

“Mulberry Windows” (5:11) – Sounds like a coded message being sent out across deep space. Soothing, growing. I can picture light passing through the windows of an atrium, hear hyperdimensional wildlife and insects in the brush. Then bass drops into place, magnificent distorted string sounds and chimes pull the beat through time. Things quiet down as a sound repeats like the windows are being bashed upon over and over. The last minute sounds like a very Bluetech progression as a melody surfaces and your body sways back and forth.

“Mulberry Windows (Aligning Minds Remix)” (3:39) – This Aligning Minds remix transforms some of the more subtle sounds from the original into something even more audible. The result kind of sounds like a big finger drum/xylaphone. Layers of ascending and descending trills create a quicker glitch atmosphere, leaving the heavy womp bits out. The remix loses some of the original’s serene sound but makes up for it by introducing new string parts and a sound that makes me think of shooting slowly into hyperspace on the Enterprise. The track draws to a close with a few drips and some thick delay. The opening repeats as the song draws to a close.

You can purchase the album and stream complete and audio samples here:
http://invisibleallies.bandcamp.com/

Brewed in the sludgy depths of the New York City sewer system, HeadZ Will Roll…