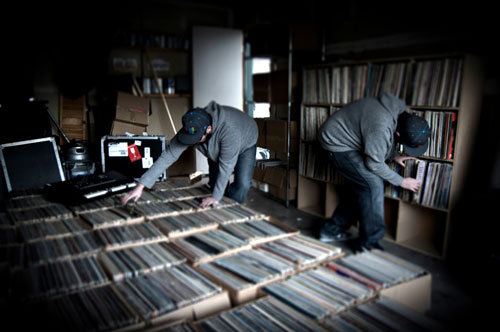 It’s been pretty hard to miss Boulder, Colorado-based producer, Alex Botwin’s (Alex B/Pnuma Trio/Elm&Oak) furious ascent through the ranks of the jamtronica scene, as he’s blown up huge audiences across the country with a beautifully produced musical craftsmanship that’s as easily adaptable to introspective time with one’s headphones as it is to a dirty dance party.

But on the evening of Friday, November 20th, the ever-more popular Botwin conceded the stage of epic venues like Red Rocks to throw down a fiery yet intimate performance at Thumpty, a fraternity house on Cornell University’s campus that moonlights as the hottest mid-sized venue in Ithaca, NY.

After opener DJs Electric Mayhem and N e Tempo whet the audience’s palette, Botwin took the stage to a warm welcome from the enthusiastic, densely clustered crowd who proceeded to vibe uninterrupted as he cruised through bangers from his album Moments, spinning tracks such as “Hot Chop” and “You and I Both Know,” and slayed a firemost take of Rusko’s “Hold On…” all the while adding to the show’s energy with his swanky stage presence and jaunty dance moves.

And as Botwin continued to guide the audience through the sophisticated beats in his musical playbook, he also threw down a few choice selections from his brand new project Paper Diamond, just signed to Pretty Lights Music in late December (the Paper Diamond track “From Now Till…” and EP sampler “Paper Cuts” can be downloaded free from prettylightsmusic.com before the official EP “Levitate” drops January 25th).

Commenting on the different musical approaches featured throughout the new project, Botwin mentioned in a post-show interview that the fundamental difference between Paper Diamond and Alex B is about “musical expression…” that after years of making “hip-hopish, downtempo type music” he was ready to tackle a different, arguably more dance floor-friendly style. And because the two projects are meant to co-exist as equally viable artistic personas, Botwin mentioned that “to be able to do both I felt like it was necessary to call it something different so people can have a distinction… so they don’t think that I’m gonna stop doing what I was doing.”

And true to the imagery of a paper diamond (referring to the creation of something unique and complex out of something basic), Botwin’s fresh beats create an evocative musical texture through simplicity, maintaining a distinct vibrance and luster without the insertion of so many layers. “It’s basically like taking your blank page and creating something that’s completely unique out of it with all the same tools that a lot of other people have,” said Botwin. “So musically, you know, a lot of people use the same stuff and the same ideas… and it’s like, how do you set yourself apart musically, and that’s what I’m trying to do, is just make my own sound… make my own musical voice.”

After Botwin finished making love to the audience’s eardrums with that distinct musical voice at the conclusion of his set, he even stuck around to cuddle after, mingling with the fans well into the night in Thumpty’s loose, non-restrictive environment, crossing the lines traditionally separating the artist and the crowd.

“It’s fun to come and do small things like that where you can really get more interaction with the crowd,” said Botwin. “I’m looking forward to coming back, for sure.”

So make sure your rage boots are tied up tight because whatever alter ego you happen to find Alex Botwin standing behind in future gigs, you can be sure his intelligent musicianship will throw even the weariest of legs into ecstatic motion.

Tribal Alliance is a nourishing, healing, and balancing event. I would consider it to be…