I was drawn to Arise Festival by the big name bands. Rising Appalachia. Polish Ambassador. Wild Light. What I did not expect to discover was a diverse array of small, emerging bands and performers from across Colorado and the nation – many of whose names never even landed on the official festival schedule. In a shaded, whimsical café, lounge, and performance space called the StarWater Stage, I found delicious coffee and captivating surprises.

It was 9am on Saturday morning and festival goers were slowly waking up after a late night of dancing to the dazzling Ayla Nereo at the main stage. I dragged myself to the center of the vendor zone and raised my nose to sniff out the nearest cup of coffee. That was when I first saw the StarWater stage. It looked like a fanciful pirate ship. Something like Atlantis meets an ashram.

Part stage/lounge and part café, the StarWater Stage was the smallest of the three stages Arise. A fully equipped bar stationed upon a wooden platform ornately decorated with maritime mementos (anchor, wooden helm, seaweed, nets) was staffed with friendly barristas serving yerba matte, chai tea, coffee, espresso, and herbal teas. Part of the Elixir Bar’s “Beverage Alchemy”, all of the drinks were made with water from a crystalline natural source in the Rocky Mountains, blessed with “prayers for peace.”

Connected to the bar was a large sweeping canvas tent. Underneath lied a dirt dance floor. Tapestries, pillows, elaborate altars, and a “paint it yourself” group panting dotted the edges of the tent, where festival goers flocked for shade, relaxation, and creative play. 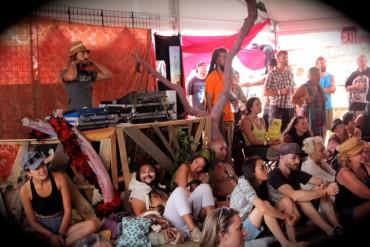 This morning the space was sublime and mellow. Just a few yards away from the cafe line, the stage was emitting waves of sound of a sweet female voice, and I could see a small crowd of sleepy-headed people sitting cross-legged, resting on each other, gently nodding to the rhythm of the music. The sweet voice on deck was Beth Preston, a soulful sultry voice from Boulder with an acoustic guitar and loop pedal. My plans to go to a yoga class were instantly subverted.

Throughout the weekend, this stage was occupied by over 50 artists, from DJs and acoustic duos, to a full-fledged brass ensemble, and solo instrumentalists. The music at StarWater stage (and the entire Arise festival) covered a vast range of genres and vibes. Dancers kicked up dirt while getting down to the reggae funk of the Alcapones; a Spanish step dancer took to the stage to accompany latin soul folk band LasCuranderas; An electronic artist Xerephine, transformed the room into a fairy-tale soundscape, playing harp & bodhran underneath her etheric voice. 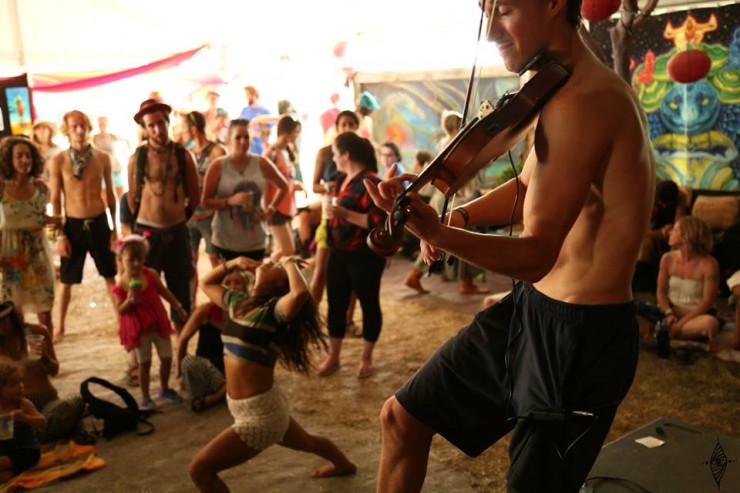 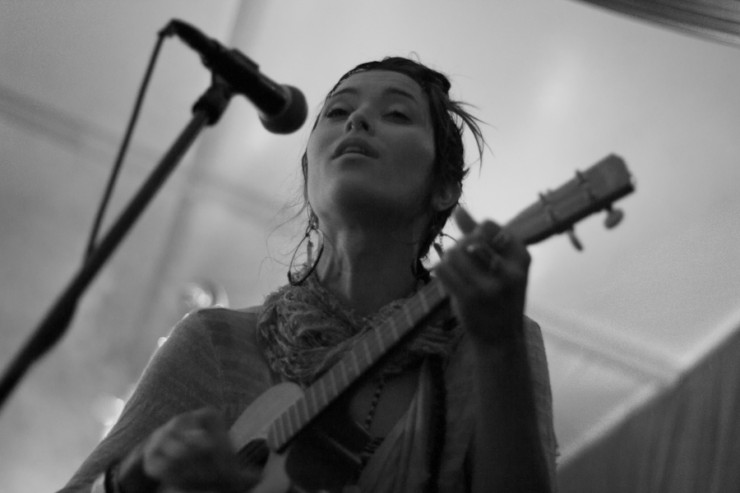 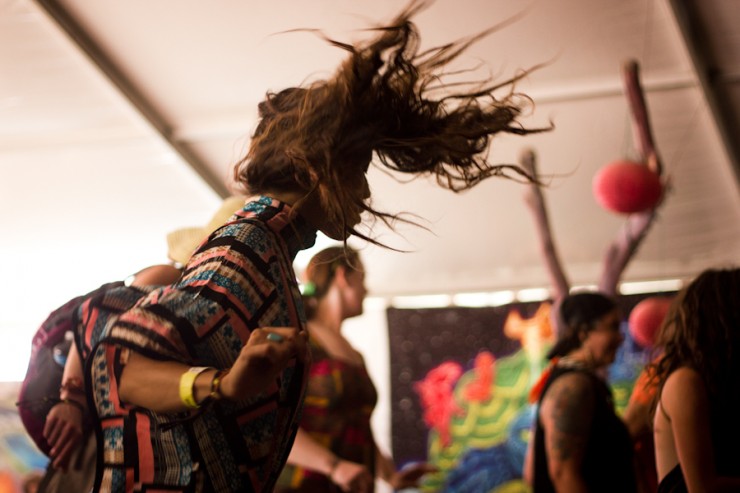 In between scheduled sets were jam sessions and songwriters open mics, where artists who were not booked on the official schedule were given 10-15 minutes in the spotlight. Among the open mic players: a violin virtuoso named Samuel Wexler hypnotized the audience with playful dynamic looping melodies. Sheri Hupfer (who described herself to us before her impromptu 5-minute set as “not really a musician but ecstatic to play”) with a latin love-song that gave me goosebumps in an 80 degree room.

When not pulled to the mainstage for the biggest acts, I found myself drifting back to StarWater, which began feeling comfy and nostalgic, like coming home.

As it turns out, that is exactly what the organizers of the Starwater Stage intended.

“We strive to create a sacred space. An environmental of extreme explosive creativity that raises everybody’s vibes” says Zoe Clare, the head production organizer for StarWater at Arise. “Our vision is practical functionality and total abundance.”

StarWater is an event production company based in Boulder, Colorado that hosts community gatherings and private celebrations at their “Sattelight” event space in Boulder and at various locations on the Front Range of Colorado. A collective of artists, musicians, poets, healers, activists and visionaries; they have participated in Arise since its inception three years ago. This year was their second year organizing a stage.

You will never get bored if you have a good internet connection and Mobdro downloaded on your phone. With Mobdro you can stream videos anywhere you want. Mobdro for Android is suitable for almost all the Android phones and tablets.

StarWater productions has been around for nearly 10 years. It was initially inspired by the thing that all of the boldest and most creative ventures are born from: shennanigans. StarWater Co-Founder Zoe Clare was 17 when she hopped a fence and busted into her first festival. She landed at a cafe stand, and quickly found herself giving direction, calling the shots, creating order from chaos. From there, her vision for a traveling Elixir Bar was born, and evolved into a physical event space and art collective focused on organizing intentional gatherings.

StarWater productions has been the creation of over 300 “Witches & Wizards” in the past 10 years.

“Our goal is to create a space where people can be vulnerable and find their identity. (Like I did) People show up and want to play a role. With a community of completely activated people, it is entirely possible for all us to find our role and thrive.”

“At the heart of the StarWater stage is the bar. People need to drink water and drink lots of things while theyre dancing really hard, having fun, and going deep. The fluidity of life needs liquid.”

Arise Festival, like many others across the country such as Enchanted Forest, is shying away from having alcohol as a centerpiece of their beverage offerings. Located immediately next to the alcohol tent at Arise, it was visible that there was consistently more traffic to the StarWater Exlir Bar than the alcohol tent.

“Alcohol is not our thing…our thing is Hydrate, Elevate, Uplift by natural means. In a way that is less inebriating and more activating” says Zoe Clare.

Beyond elevating my own oxytocin and hydration levels, the StarWater stage elevated small and emerging musicians, and activated laughter, funky dance moves, and moments of mesmerizing zen, in a place that felt like home.

Today marks the release of Living InFormation (via Transcendent Tunes), the first EP from Detroit based…