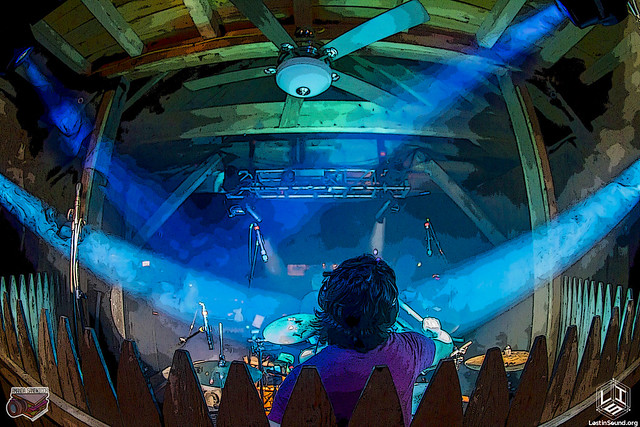 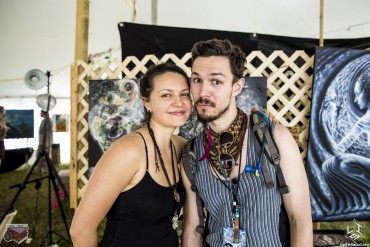 Many people are hesitant to attend a music festival in its first year. Experiences of events past and horror stories from friends lead many to believe it takes organizers at least three years to get things down, and that’s generous. Spectral Fest at Page Farm (Croydon, NH), which happened over July 17-19, seemed to have SOME of the expected hiccups of a brand new event, but was remarkably on point from the perspective of the attendees. Spectral had the advantage of taking place at one of the best festival venues in New England. The Page family works tirelessly to create an environment that people enjoy, with beautiful woods to camp in, local artisans and vendors who frequent that site alone, and farm fresh catering for VIP guests. The permanent stages add to the rustic appeal, with the newest stage being augmented by a carved moon instillation courtesy of Chase Hanna and The Reliquarium. 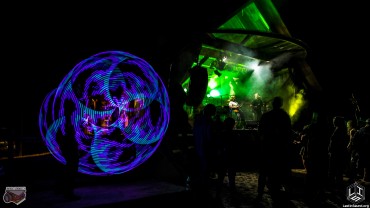 The highlight of the event was the art tent, which featured incredible artwork from regionally to internationally known artists. Canvases by Martin Bridge, Visions of Ajra, Olga Kilmova, Johnathan Shook, Jeff Sullivan, and many more lined the flower petal shaped lattice walls inside one of the only dry locations on the rainy concert field. The back corner of the tent was inhabited by Chase Hanna and the strange creatures from The Reliquarium. Guests could regularly find them welding copper sculptures and making strange skeleton creatures with real bone fragments. Kai Griffith and some fellow Funky Stuff Artist Collective painters, Alyssa Woodcock and Mary Murph, set up shop in the opposite corner. The design of the tent showed off a huge variety of styles and mediums, and created a flow that was very appealing to wander through.

The results of Saturday’s body-painting exhibition 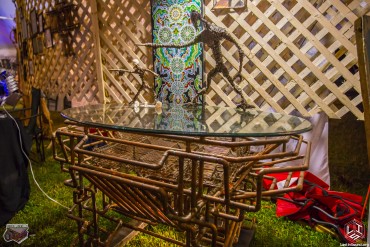 Artist Chase Hanna’s exhibit, featuring “August Antecedent”, one of his more complex sculptures to date made of re-purposed copper piping.

Some features of Spectral Fest had the hit-or-miss vibe that one would expect at a first year event. Saturday’s body painting exhibition boasted far more than it delivered, with fewer artists than originally claimed, and even fewer body-painting masterpieces at the end of the day. Of the ten or so women that participated, only two were lucky enough to be painted particularly well. The Holistic Village, always a wonderful addition to an event, is known for putting on fantastic workshops for adults and children alike in a variety of disciplines. However, due to a lack of schedule, many guests weren’t aware of the happenings and missed out. This is a shame, as the guests who did find their way to the Holistic Village were greeted with fresh fruit, free yerba mate, massage, legos, and coloring, along with oodles of knowledge offered up by their skilled teachers. The “Electric Forest” instillation was somewhat kitschy, with a hodgepodge of UV reactive artwork that didn’t quite do justice to the high profile name. The Moon Dream Tea Lounge, which was put together to resemble a small movie theater, ended up waterlogged and collapsing at the end of the first night, and was never able to be quite put back together. 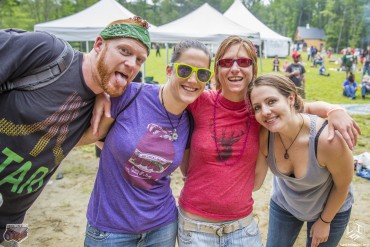 The most glaring issue with Spectral Fest is one that is shared among many events this year, and that is a lack of schedule. While the effort to “go green” is appreciated, events lacking a printed schedule leave guests wandering without a clue. That, compounded with stage delays and swaps, made catching your favorite artists difficult. When you did stumble into the right stage at the right time, however, you were handsomely rewarded with a very eclectic lineup. Electronic heavy hitters like Phutureprimitive, Psymbionic, and Of The Trees shook the pastoral grounds. 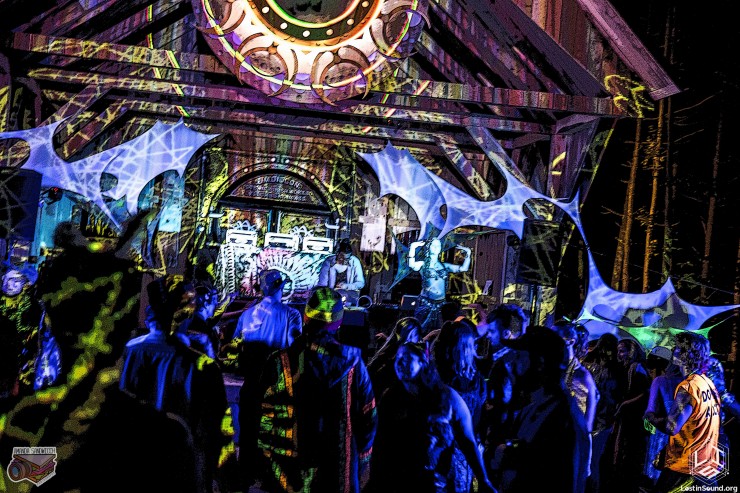 Supersillyus, eelko, Artemis, and others jumped in on the first ever Shapeshifting Fractillians set, a live collaboration masterminded by the Worcester based arts collective Fractaltribe. The live band lineup was very well rounded, featuring Viral Sound, Wobblesauce, lespecial!, The Alchemystics, and other favorites of the North East Festival circut. While primarily local, the live band selection highlighted groups that have defined a unique style all their own. Augmented by The Hornitz, who’s “at-large” guest collaborations have been fan favorites all over the east coast this season, lespecial gave one of the best performances of the weekend. Their particular style, coined “Death Funk”, exhibits these boy’s raw talent. They wrangled a full audience on sound alone, despite the lack of schedule.

Unfortunately, situations resulting from the lack of schedule and bizarre stage placement, combined with unclear guidelines about sound curfews, made for some unusual incidents through out the weekend. Many artists were unclear on their set time, and guests were frequently disappointed when the sound from both stages simultaneously muddled each other. The music seemed constantly at odds with something, be it another performance, needing adjustments on the fly, or disputes about ordinances. Early morning performances by Eelko, Living Light, and Supersillyus were interrupted due to neighbors’ complaints, and continued only after the sound system was turned significantly down.  After one such incident during his Sunday 1AM set, a somewhat disgruntled Supersillyus commented to the audience “I guess we’ll listen to some bass music without any bass now…”.

Some artists even elected to cut their set time in half, to avoid overlapping other artists, or infringing on the neighbors good graces.  While these issues can be chocked up to first year difficulties, it made the music part of the “music festival” difficult to enjoy fully. 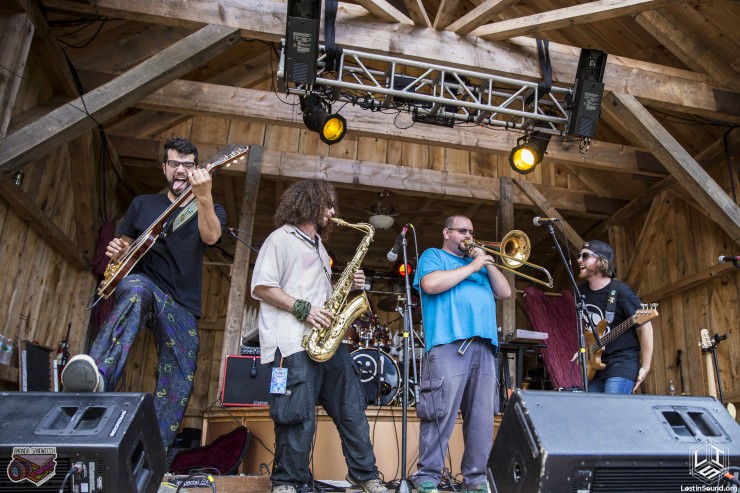 lespecial! tears it up with the Hornitz on brass.

Despite these issues, Spectral Fest went over well in its first year. There were no lines and plenty of space, and the woods were full of friendly faces. The warmth and familial feeling that grassroots events are known for in this region was definitely present, infiltrating the skepticism that follows events in their inaugural year. Spectral Fest has room to grow, and it will be interesting to see which direction it climbs. 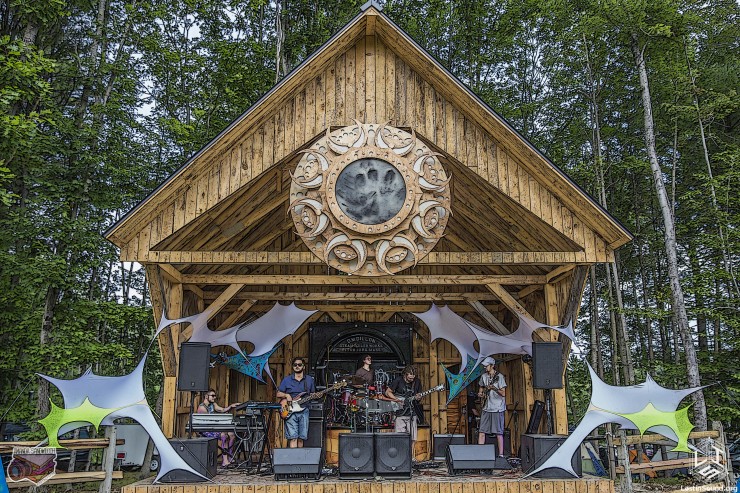 Phinally the date arrived! On Thursday October 29th, at 9am, my phlight to the West…