Portland is a damp haven, where trees wear sweaters of lush green moss and scarves of lichen. Slippery bark is flocked by ferns, while wet steel trusses connect east and west. Refuge PDX is across the bridge from downtown Portland, on the fringe of the Buckman neighborhood, down a deserted street, a dead end at the river. Despite the industrial exterior, the interior is luxe. Upon entry, guests are greeted by a fully stocked bar and beautiful paintings displayed in the lobby.  We’re here to celebrate Rythmatix, a local clothing company that has been on the backs of future music legends like Emancipator, ill.Gates, Russ Liquid, and Love and Light.

An antechamber, warmly decorated with a huge mural of a smiling lady engulfed in art-noveau swirls, hosted a well-stocked Rythmatix clothing booth. A “buffology” station was settled at the leather couches, where exhausted muscles could get buffed by a rotary sander outfitted with a massaging apparatus. A crystal vendor with fine specimens of quartzes, agates, kyanite, and other mineral wonders was set up nearby. 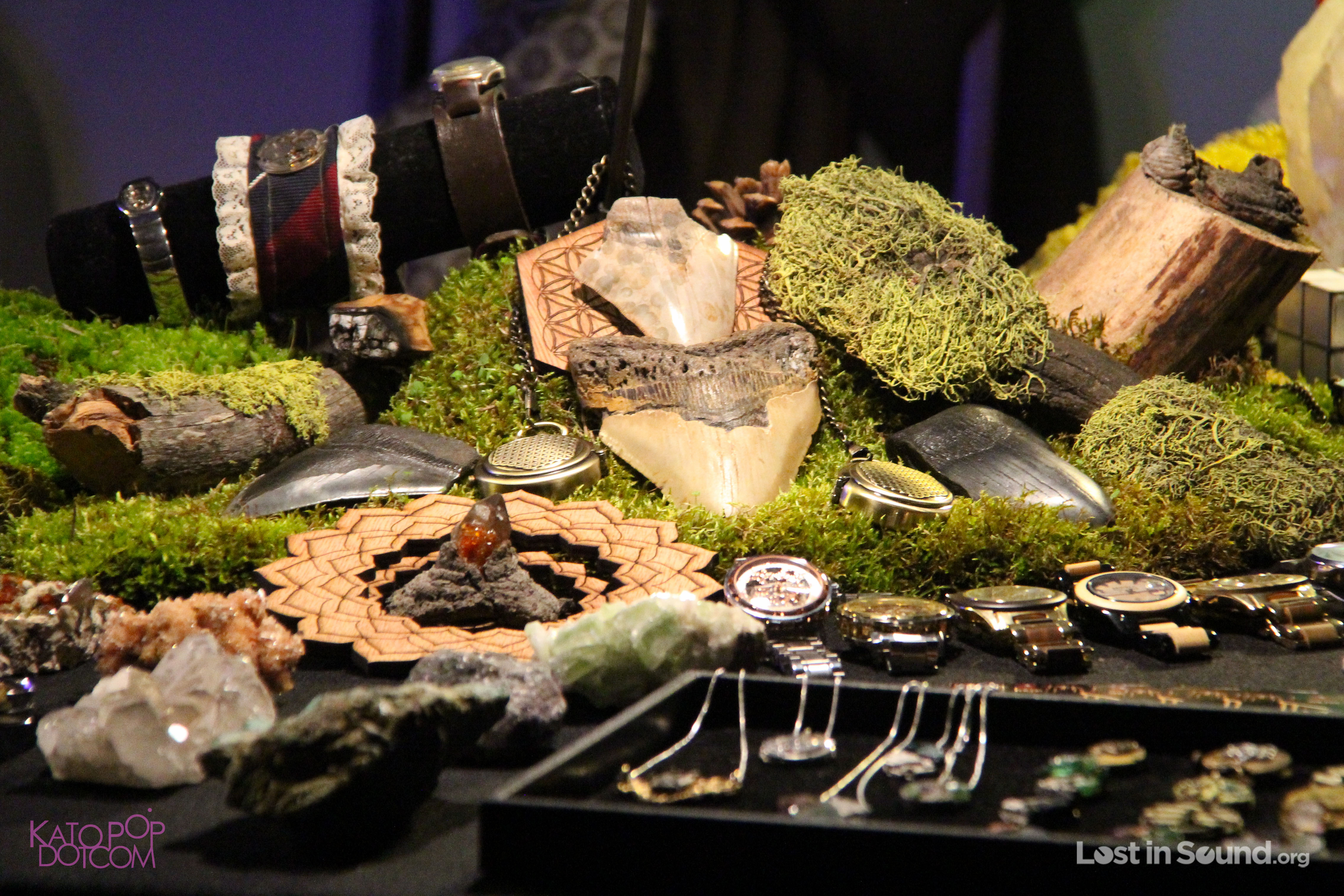 A mossy table occupied the entryway to the main room offering neat and tidy wire wrap pendants by Katia Toporkova and watch-part cufflinks and rings embedded with lapis or tourmaline by Steampunk Evolution. The main room at refuge has tall, tall ceilings with square footage available for immense surface projections. Rythmatix’ geometric designs projected on the stage; the two year anniversary celebration was clearly a friendly affair. The beautiful pine dance floor was so shiny and bright, gleaming, warm, and just waiting to be scuffed. 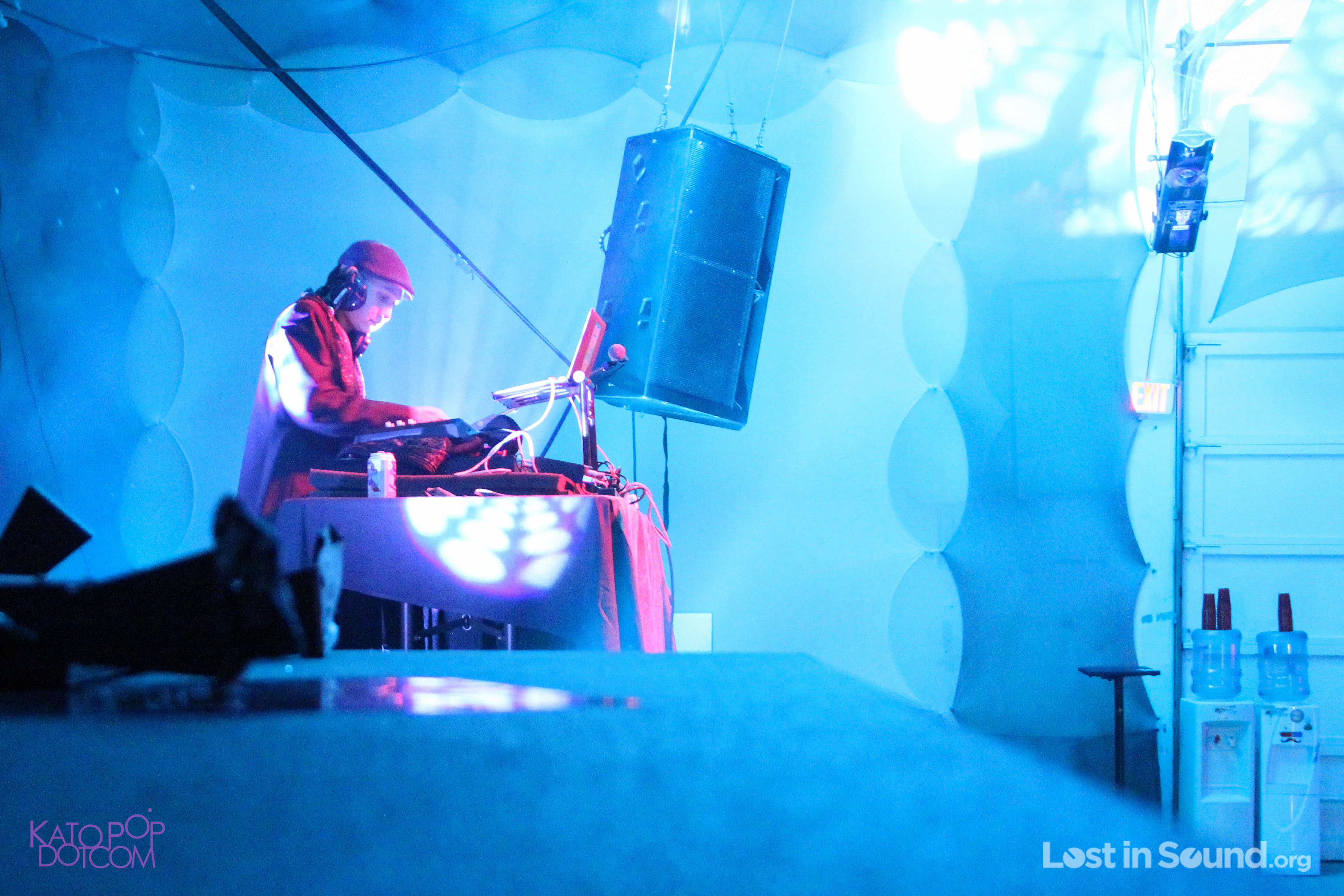 Mr. Wu, our humble host as well as DJ, designer, event promoter, and owner of Rythmatix, warmed up the massive woofers on both sides of the stage. Some DJ’s who hold the warm-up slot have a nasty habit of forgetting that they’re playing to warm-up. They can go too hard, scaring people off with raging beats and viper-style drops. However, Mr. Wu did an amazing job of not overdoing it, and I’ve seen warm-up DJ’s sweep the dance floor clean with harsh and frenetic vibes, performing as if he or she had the main slot on the bill. Friends and fans who showed up for the initial set boogied a bit and perused the wares while folks trickled in. SPekt1 provided equally appetizing jams. Both he and Mr. Wu gave us mellow yet upbeat trap and hip-hop infused mixes. The blank canvas of the room was being candy-coated with Refuge’s A+ lighting system, as we mingled and sipped our cocktails. 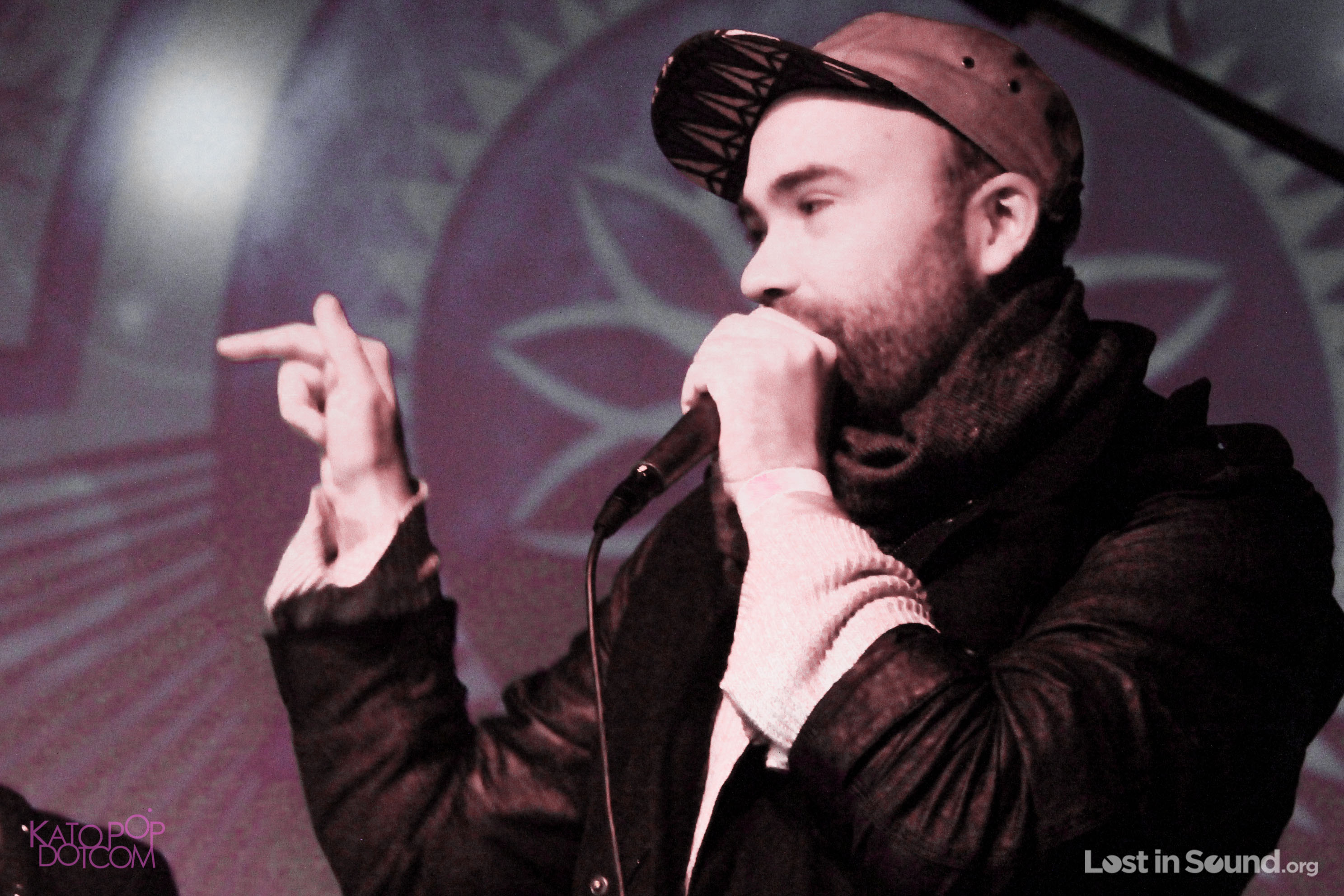 Portland is about an hour and a half away from the Bay Area by plane. San Francisco’s DJ Dials skipped up the coast to play a handful of excellent unreleased originals, and threw in a solid dose of R&B classics while the room gradually filled. Gretchen, a talented belly dancer writhed and shimmied to the cool tempos in a custom Rythmatix-printed costume. Party guests followed suit and the glowing pine dance floor was being put to good use. Hoopers and dancers continued to accompany the DJ’s throughout the night.

J.Atlas a.k.a. Thriftworks is a tall, blonde, beanie-capped Berkeley Dinoman. I wonder, does he nom lazily on leaves while he mixes his beats? I wonder, does he stomp with dino feet that shake the woods, crinkling leaves and crunching branches? Ancient reptilian birds perched on shoulder, does he wander to a lake or creek to quench his thirst for original samples? He hit the stage, and it was as though a fog rolled in. Soupy, moist, and mysterious sounds enveloped the audience. The ethereal vibe he throws down is entrancing. His most recent album Terry-D, brought to us by Street Ritual, is a gnarly tangle of earthy, chilling, swooping pandemonium. The new sounds are both cheeky and elegant. In the title track, lyrics describe Terry-D snatching chickens from a coop, mackin’ on ‘dactyl ladies, a king of Pterodactyls. The ominous vocals are nestled in heavy, goopy rumbles and expertly placed smacks of metallic twang. 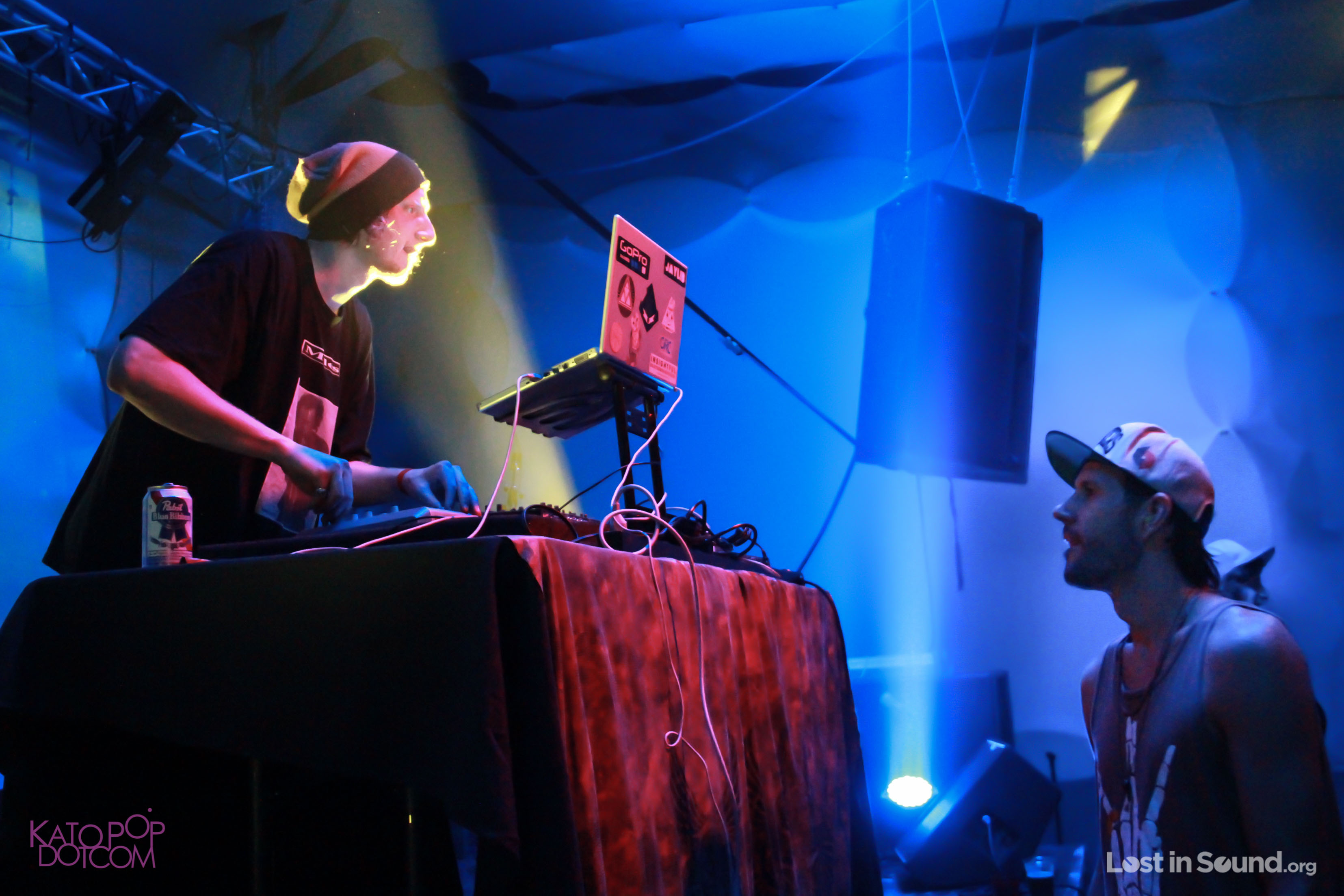 Atlas moped across the decks with all original stuff, lulling the crowd into a glitchy prehistoric daze. Syrupy bass and unpredictable but always finely synced clicks, chomps, pops, and ticks were drizzled all over the fine pine dance floor.  As shoe-gazey as all this seems, the chunky bass and slithering reverberation in the room had everyone dancing; movements were rounded, fluid, and sedate, but not disinterested. It is not a dull sound – it is fascinating, one could even say intellectual. He closed his set with “Smokey the Bear,” another tongue-in-cheek track. After this show, Thriftworks played Envision Festival in Costa Rica, another spot well-suited for primordial rhythms. Download Terry-D on Bandcamp.

As though awakened from a luxurious satisfying sleep, lids were lifted and the molasses was cut with sharp syncopated beats, a silvery reggae thread. We were roused with “No More Drama” in our lives, piano chords keepin’ it classy. Barisone was a human alarm-clock, peeking from crescents of eyes, a signature smirk drawn on his face when he had something extra good about to drop. He looks out to the crowd, and it’s like we are all involved in an inside joke: just Barisone and a warehouse full of his closest friends. Booties bounced on and on as Portland’s beloved bro served up refreshing takes on tracks from Missy to Marley. 3:15 AM came around, but the formal ending point of the party was swept under the rug because Portland was not finished yet. One guest summed it up pretty accurately, “I believe this is an ass-shaking contest… And we are all winners.”