We were coming off the previous night’s performance at Uphoria Festival in Millerton, NY, and suffice to say, I was operating on a marginal amount of sleep. However, after securing the “mobile rage” (a portable 100 watt iPod dock) for ample tunage on the drive down (my new Volvo has many features, a functional stereo system isn’t one of them) and leaving our equipment behind for safe keeping, we set off down Rt. 22 South towards Huntington, NY. With Luke behind the wheel and myself calling the directions via the wonderfully helpful iPhone GPS, this was sure to be smooth sailing all the way to Long Island.

The sun set over highway 25A as we pulled into Huntington. We passed The Paramount and the sizable line around the block and began asking pedestrians where to park. After a few different hints about parking lots, we finally found some nice two-hour parking on a side street nearby. Walking towards the venue, I became discouraged to hear music echoing from in between the buildings on either side of the Paramount: Primus had already started playing.

Missing the opening song of any bands set is a pet peeve for me; I really like to be there for the opening number. I feel like when you miss the first tune of a set, you’re at a disadvantage for processing the vibe of the whole show. Fortunately on this occasion, the first song was “Those Damned Blue Collared Tweekers”, a tune I had seen Primus play the past two shows I’ve attended. This quickly balanced out, for when I asked security if we could go to the front of the line because we were on “the list,” he quickly ushered us ahead, keeping us from missing any more of the performance. (Huge thanks to Lost in Sound and Primus’ publicist for hooking it up!) 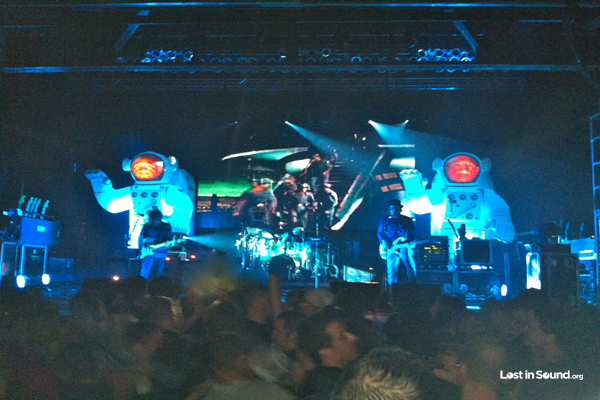 The Paramount is a fairly typical concert hall, reminiscent of a smaller Roseland Ballroom, with the wrap around balcony overhead and VIP viewing areas to either side. Entering the crowd during “Hennepin Crawler”, the opening tune from their latest release Green Naugahyde, I was relieved at the size of the room, as it had the makings of a nice intimate experience.

Similar to the last show I attended back in February, the highlights of the performance were found in the improvisational segments of various tunes. At the helm of these energetic portions was guitarist Larry Lalonde (the ying to Claypools yang), whose playing was particularly happening on this night (see videos of “Groundhogs Day” and “Over the Falls”). More often than not, Claypool has been known to take center stage, so it was refreshing to see Ler asserting himself. Also worth noting is the refreshingly tight chemistry between Claypool and sticksman Jay Lane.

Lane is truly an amazingly adaptable drummer whose ability to improvise and cater to a myriad of musical settings has elevated this new/old (Lane was the drummer on the earliest Primus demos, circa 1988) Primus line up to a level of musicality unmet by previous line ups (a percussion specific bias, but I stand by it!). This was especially evident during the breakdown sections of both “Groundhogs Day” and “Eleven” during the first set; “Eleven” featured an extended drum intro showcasing Lanes’ talents in a solo setting.

My one major criticism of the night falls into the realm of sound. While the system at The Paramount sounded well-balanced (you could hear everything, except Claypools “Sandman” mic, but that’s an equipment issue, not venue related), I couldn’t shake the feeling that it just wasn’t loud enough. Perhaps this was due to a local noise ordinance (?), but I was left wanting to feel more bass in my chest, and it just wasn’t happening. Initially, I mistook this for a lack of energy on the bands part, but after analyzing the situation, the fault lies in overall room volume. To the soundmen responsible, turn that shit up meng!- rdolan

The remainder of the review is written by world renowned childrens author Lewis Carrol, aka Lewd Lewis (more commonly known as Luke Bemand of lespecial), a veteran wordsmith making his Lost in Sound debut!

After casually enjoying some Lay’s Chips and IPAs, Rory and I scuttled our way back to the middle of the crowd. This was one of the less crowded Primus shows I’ve been to, which was a welcome surprise considering the dense population of sweaty brutes eager to start a mosh pit at these shows. Rory and I encouraged each other to finish our beverages before the music started, because spilling them would be inevitable.

Jay Lane took the stage for the second set and started with a battering of the toms and some intricate and subtle hi-hat work to create an odd-feeling loop that seemed to reciprocate in on itself. The rest of the band joined him, and that familiar Primus wash of sound filled the room as we heard Les’ signature slippery envelope filter against a wall of a distorted, whammy-bar guitar noise, as they ripped into one of the better tracks off their latest album, Eyes of the Squirrel.

Behind the band stood two 20-foot inflatable astronauts. Projected onto the helmet of each figure was an image of a man’s face that constantly peered around at the crowd with a look of perplexion. In between the looming figures was a large projection screen that spastically interchanged between two or three images or loops each song. For “Squirrel,” it was the same image of a squirrel that a camera continues to zoom in and out of in a hectic manner. Themes like fish and cheese often popped up, while other tracks may just have had an elephant jumping on a trampoline the whole time.

I often enjoy peoples’ reactions to the astronaut visuals. You always hear a “those faces creep me out man.” You’re at a Primus show, bud. You stepped outside the realm of reality the second that security guard fondled your taint. Primus does a truly unique job of taking you into their weird, weird world as soon as you walk into the building.

As the song faded out to the sound of Les’ reverse loop pedal (an ambient effect he often implements to transition in between songs), he ripped into “Duchess and the Proverbial Mindspread”; an 11/8 off kilter, almost reggae feeling track from Primus’ most raw and underrated album, The Brown Album. Both sets were very heavy on material off Naugahyde, which is understandable being the only album with new (and really old) drummer Jay Lane. But I can’t help but feel biased against these songs, not because of being a die hard old school fan who really wants to just hear the old shit (even though I totally am), but because Les’ new bass just has a completely different sound that I don’t enjoy as much as his signature Carl Thompson basses. This new bass that is featured on nearly every track on Naugahyde has a very twangy, mid-rangey sound. Even for Claypool. Les always favors a bright, aggressive sound, but his old Carl Thompsons had a low end punch to them that just isn’t present with this new bass. I also probably pay a lot closer attention to that than the average concert attendee.

One of the highlights of the show was when Les approached his electric upright bass, donning the infamous ‘pig mask’ he wore in the bizarre, circus parade music video for 1996’s “Mr. Krinkle.” I heard a diehard fan next to me looking ahead with a huge grin and gasping, “Oh man, I hope he plays Krinkle.” After teasing the crowd with some eerie slides and scrapes down the neck with his bow laden with delay, they launched into the creepy “Mr. Krinkle”; unleashing what sounded like a haunted vaudeville theme out of an old horror movie, decorated by Ler’s heavily flanged out quirky diminished hooks and wails.

Going into this show, I was wondering what Primus’ motivation for this tour was. In past tours, they usually feature an album to play in its entirety, including the last time I saw the group in the fall when they performed Green Naugahyde in its entirety. This show featured two sets of a splattering of material spanning their entire 23-year career. And it seemed like the motivation to do this tour was just that they’re having fun playing together. The vibe on stage was great, there was noticeably more banter at this show than others I’ve been to. You can often count on Les to draw attention to the usually obscured Ler, and Ler usually just standing there awkwardly, shrugging or nodding his head.

Tonight, Les addressed Ler as “Long Island Ler” and exclaimed, “What a might man he is! Look at that wrist action… armed with his semi-long sleeved shirt and white telecaster, that he balances on his head” as Ler shook his guitar around and put it on his head. As the crowd chanted “Larry, Larry” for Primus’ unsung hero, Les corrected the crowd, “No, it’s not ‘Larry, Larry’, it’s ‘Lerrrrrr’”, as the venue chanted in a slow, loud droll ‘Lerrrrrrrr.’ It was funny, engaging, and it’s nice to see a band you love having fun and not taking themselves too seriously. 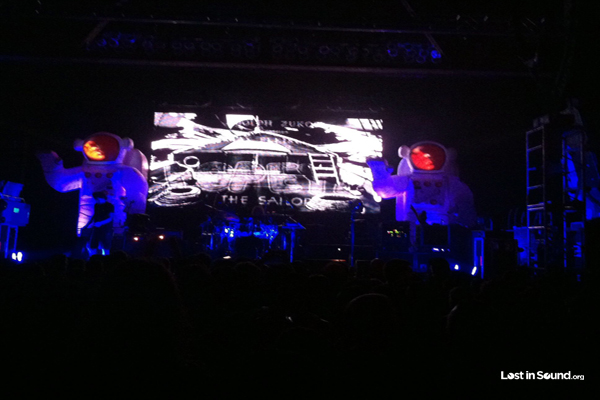 For the encore, a classic ‘Stairway to Heaven’ tease, which Ler still apparently finds amusing after all these years, into a ripping distorted guitar riff that sounded like it could be the intro to a track off Ride the Lightning, that led them into “HOINFODAMAN,” one of the few songs Ler wrote on the new album. They quickly transitioned into the wild and frantic “Pudding Time,” a high energy, nostalgic way to end a show that highlighted their new material.

So overall, while I would have been more content seeing some of the older material, it’s evident that they are doing this because it’s FUN for them, and I really couldn’t ask for anything more from a band I’ve been seeing since I was fifteen. They have eschewed that dark, ominous vibe that older shows used to have, and while they don’t sound the same as they did back then, they look like they’re having a lot more fun now. On the car ride back to Uphoria at the end of the night, Rory and I both agreed that, we too, enjoy having fun.- Lewis Carrol

The multi-talented Michael Garfield has released a new solo album The Body Electric, full of…