On my day off between lespecial’s Philly and New Haven shows on the Brothership Connection tour, I made my way to Brooklyn to experience one of my favorite bands in a “small, enclosed environment”. After sipping on some raw carrot/beet/ginger/celery juice and leeching off the wifi at New York Muffins on 6th Ave for some last minute facebook promo, I was ready to head for the venue. Unsure of the level of doja tolerance, I took a warm up lap around the block to work on my “breathing”. Turns out I was breathing just fine, so I joined the surprisingly short line that had formed outside and began to chat with some of the folks (In case you were unaware, Claypool frequently refers to the crowd as, “the folks”, a casual term of endearment). After handing out some Brothership Connection fliers, I acquired my wristband and was inside on my way to the coat check. With my coat checked and dual Sierra Nevada IPAs in hand, I made my way upstairs to the main floor area. This room was ridiculously small! I actually walked around for the first few minutes making sure everyone knew how excited I was about the size of the room (“ Yooooo this room is mad small y’all!”). While on the floor I made civil relations with those around me in an attempt to ward off excessive aggression from overbearing meatheads, an unfortunate component of almost every Primus show I’ve been to. Thankfully, while gazing around I observed a much younger crowd, behemoth meatheads were few and far between.

As the room started to fill in, familiar sounds flowed through the PA speakers: that’s right, the commencement of Danny Elfmans score from Pee Wees Big Adventure was a tell tale sign that Primus would be on stage shortly. Just for the record, with the exception of The Mars Volta coming onstage to Ennio Morricone’s theme from Fistful of Dollars, this is the most fittingly badass preshow music ever, hands down. The lights dimmed and a tall grizzly, leather-vested Jay Lane made his way to the drum throne, followed by Larry “Ler” Lalonde and Mr. Claypool himself. Identifying the first tune quickly from Lalondes screeching Wah pedal swells, I readied by feeble knees for an explosive opening take on “Those Damn Blue Collared Tweekers”. Next up was one of my favorite tracks from the recent Green Naugahyde, “Hennepin Crawler”, a new tune that retains the classic Primus formula we all love: a catchy repetitive envelope filter soaked bass hook that is rhythmically bound to the double bass drum pattern and vocal part, accompanied by characteristic off kilter guitar skanks from LaLonde. “Groundhogs Day” followed with an extended bridge section showcasing some seriously fresh improvisation.

The next few tunes, “Moron TV”, and “American Life”, also featured extended improv sections, the likeness of which displayed a musical enthusiasm and playfulness that has sometimes been in question on past tours. Following some amusing banter from Claypool, in which he claimed Jayski would be doning a Phil Collins hair-dew next time we see him and admitting to his own self indulgent tendencies, it was clear that everyone was in great spirits. I ventured up to the balcony to catch an aerial view/analysis of Lane’s unique floor tom groove for the set closing LSD fairy tale .“Over the Electric Grapevine”. Contemplating a trip outside for some air, I ended up running into some old friends at the bar and chatted for a while before heading back in for next set. Having already heard a few selections from Green Naugahyde during the first set, I was sure that the second set would feature a mixed bag of tunes and not GN in it’s entirety. This was pleasing because as much as I enjoyed the new album in it’s entirety for the shows this past fall, I find the element of surprise in a set to be one of the most exciting aspects of a show, more likelihood of an older rare tune, etc. The set opened up with the moody “Southbound Pachyderm”, followed by the quirky 11/4 jaunt of “Dutchess and the Proverbial Mindspread”, a tune with lyrics that touch on the grave consequences of trafficking hallucinogens. 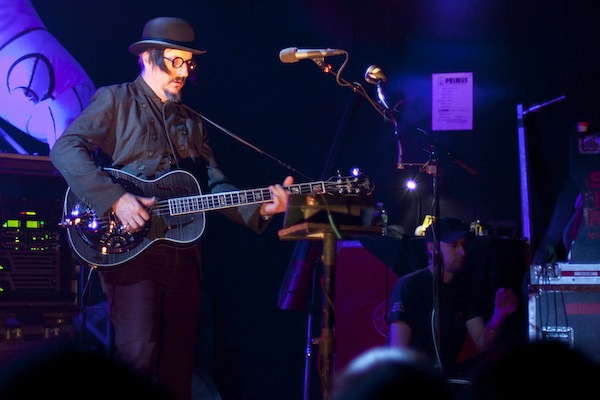 Lanes drum solo in the middle of “Dutchess” was something to behold: sporadic trading with Claypool that reached an ultimate boiling point before spiraling back into the main groove of the tune. More selections from the new record were sprinkled throughout the second set, including more of my favorites, “Jillys on Smack”, and “Lee Van Cleef”, both receiving enthusiastic crowd responses. I got DOWN during “Lee Van Cleef”, feeling like I had finally found a niche for my bizarre, dissociative dancing style that I display at the Wonder Bar in Allston on a weekly basis. The set rolled on with a consistent energy, closing with one of the oldest Primus tunes, Frizzle Fry’s “Harold of the Rocks”. Complete with soulful aggressive guitar soloing from Lalonde, evoking Frank Zappa ala Shut Up and Play Yer Guitar, “Harold” was a fitting set closer. Les, Ler, and Jay exited the stage quickly only to return a few short minutes later for their encore. Ler teased the opening notes of Zeppelins, “Stairway to Heaven” before quickly shifting to the distorted snarling riff of “HOINFODAMAN”. This is one of those tunes from GN that has a much heavier, more lively energy when played live. Despite the frequent cheers for the scarcely played Pork Soda classics “DMV” and “Nature Boy”, Les instead slapped those unmistakable double thumps that serve as the intro for “Pudding Time”, and the pit erupted once again. Having not seen this tune live in a while, it was a most fitting closer for me, balls to the wall energy before casting us out onto the streets of Williamsburg.

This marks my 10th Primus show, and having seen them in various rooms ranging from Roseland Ballroom, the Orpheum Theatre in Boston, B.O.A Pavilion in Boston, Radio City Music Hall and the State Theatre in Portland, ME, this show was by far the most intimate. It’s very refreshing to see these guys in good spirits, not just going through the motions, but clearly having a great time playing music together again, evident through the plentiful improvisational energy that fueled the evening. As far as the crowd is concerned: very well behaved for a Primus show. The moshing throughout was fairly friendly, not too out of control, a definite sense of camaraderie was present and it was great to see everyone helping each other up off the floor. Oh and I almost forgot to mention, it turns out the doja tolerance in the room was very much in my favor. I elevated organically throughout the entire show without so much as a tap on the shoulder from any staff. Now that’s the way it should be at every Primus show, nice job y’all! The Brothership Connection Tour landed at Stella Blues in New Haven, CT the following evening and I am grateful to be so wonderfully inspired from this show. If you ever the chance to see any of your favorite bands/musicians in small, enclosed spaces, do yourself a favor and go, you won’t soon forget it.

I had the great pleasure of doing an interview with Andy Beyer, who produces under…