This month, we’re getting Lost in Sound with visionary artist and permaculture enthusiast Martin Bridge. Based in the Pioneer Valley of Massachusetts, Martin divides his time between creating artwork, teaching both young and old, and nurturing his homestead gardens. He has been a longtime advocate for the permaculture movement, and his self designed home and property embody the principles to extraordinary detail. Martin gleans inspiration for his artwork from the synergy of organic systems in the natural world, painted with the same attention to detail that can be seen in his gardens. Often his paintings have a clear message or story to communicate, meant to inspire viewers to expand their understanding of the world around them. 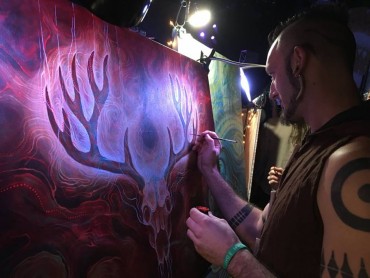 The Art of Martin Bridge can be seen from coast to coast in a variety of cultural circles. He is a regular featured artist and workshop faculty at CoSM(Chapel of Sacred Mirrors), and has made appearances at Lighting in a Bottle, Gem & Jam, and Unifier Festival in the past year alone. He’s painted on stage with a number of musical acts, including Shpongle, Desert Dwellers, and Beats Antique, gaining widespread notoriety for his painting entitled “Deer Dancer”, a portrait of the infamous Zoe Jakes. Unlike most visionary artists, however, Martin’s work hasn’t been culturally cornered. His work has been featured by spiritual communities in the northeast, as well as scientific communities who are drawn to his use of naturalist imagery. Even the legendary mycologist Paul Stamets is a fan, with several of Martin’s mushroom series in his personal collection. 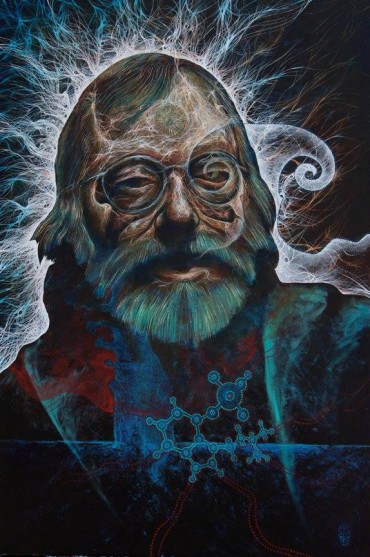 For an artist with such a vast following, Martin Bridge remains extremely grounded, both balancing a day job teaching with a variety of interests and constantly seeking to better himself as well as the world around him. We had a chance to meet up with Martin Bridge after this year’s Gem & Jam festival, to talk about his skills in armored combat, his motivation to create, and what he listens to when he gets “Lost in Sound”.

Lost in Sound with Martin Bridge:

You’ve developed a very characteristic style of painting that creates a lot of movement in your work. How would you personally describe your style, and what do you think makes it so kinetic?

In terms of art genres, my art is easiest to be grouped into the visionary art classification and while some of my favorite contemporary artists are a part of that movement, I also draw a lot from “Primitive” or indigenous arts. I try to pull inspiration from these sources while avoiding appropriating an artistic cannon from any indigenous culture, especially since they have had so much taken from them. The result I think is something that fits visually with many “Visionary” works but feels a little more organic. My process often starts as very quick, loose and intuitive and I usually then slow for the tight line and meditative dot-work. 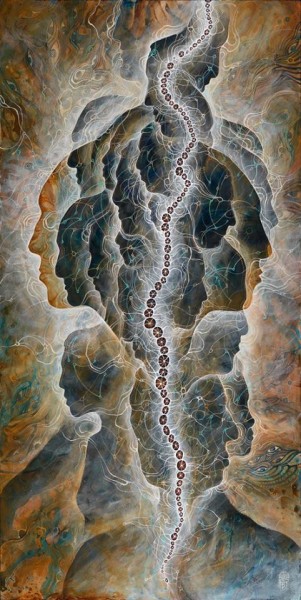 Your art has been utilized by a variety of communities and individuals from vastly different philosophical backgrounds. Can you tell us a little more about that?

I think in the grand scheme, it’s not that vast a range but spanning different social groups can be tricky. We tend to categorize and like (and dislike) stylistic modalities. Once an artist connects with a particular group they might often come up against barriers when looking outside that populace. I feel blessed that my work resonates with mindsets like the Visionary Art and (Transformational) Festival Communities as well as those involved with Animism and Eco-Spirituality or Paganism. My work still involves enough of a focus on Environmentalism and Permaculture to hold interest with a more academic element that usually tends to write the previous groupings off as a mess of weirdos. I am grateful to be able to balance that somewhat.

“The Tree” by Martin Bridge

You seem to take inspiration from a variety of places and stories. Is there an overarching theme in your body of work?

The most connective theme in my work would be an exploration of our relationships with the natural world and our inter and intra species dynamics that, I feel, must change if we intend to stay a part of the web life on this planet. One of the magical aspects of art is that we can use a moment where a viewer might have their interest peaked, for reasons they might not understand, and when someone starts to ask what I (or other creators) are thinking or bringing to the work that person is innately more open to the subsequent discussion, as opposed to the barrier that those will come up against when proselytizing. Very few people want to be told what to think, but we are intrinsically curious beings and like investigating what’s around us. Simply put, I strive to create work that starts a dialog around how we can live in better relationships with ALL beings around us. 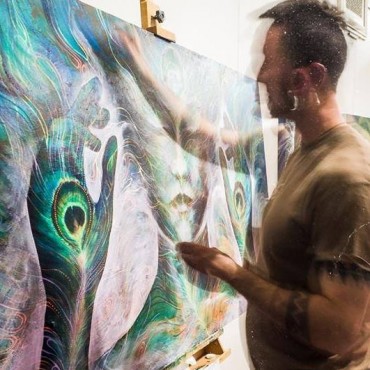 Martin working on a new piece at the reception for his gallery show “Observed” this past March in North Hampton, MA

You work as a teacher during the winter months; does this affect your creative process? In what ways?

We are actually talking about September through June, so the majority of the year. As an art teacher I spend all day helping young artists grow. There is a part of my awareness that spends some of this time considering what I would be practicing or creating if I were in their shoes. Sometimes while roaming the room offering feedback and critique on what they are working on, I carry a tiny notebook or folded piece of paper and jot down quick notes or studies related to my own work. So when the time comes where I am at home and have the time to dive into my own creative process, I have vast reserves of imagery and concepts I want to address. Artist block is not something I experience. When the time comes where I can work, the hardest challenge I face is sifting through the myriad of concepts that I want to manifest to decide what I should work on in that particular moment.

Martin teaches grade school arts and theater design in addition to leading workshops at CoSM and around the North East. A natural educator, Martin hopes his artwork inspires people to ask questions.

You’re a medieval culture enthusiast, and quite regularly participate in armored combat re-enactments and mock battles. How’d you get into that?

You are referring to my involvement in the Society for Creative Anachronism or SCA. This organization is not really about re-enactments, as a re-enactment takes a predetermined historical outcome and acts out the drama of a battle. While people are drawn to this organization for a host of reasons my interest is primarily in the Armored (or Heavy List) Combat. It is essentially a Western based Martial Art form and is an extremely competitive endeavor that involves a host of variations and forms, from one on one combat to mass melees involving up to 2000 individuals on a field the size of 12 football fields.

I was always a little bit of a misfit and have always been drawn to things that are a bit off from popular culture. As a teen I was drawn into gaming as a way to dive deep into fantasy or alternative worlds. Later I was drawn into LARPing and upon discovering the SCA quickly jumped into that as – who would prefer swinging plumbing products at others when one could don armor and essentially fence with clubs? While the SCA combat is not trying to kill anyone, it is seriously competitive and has been one of the major motivating factors in my desire to stay in good health and strength so that I can continue to excel in that practice. 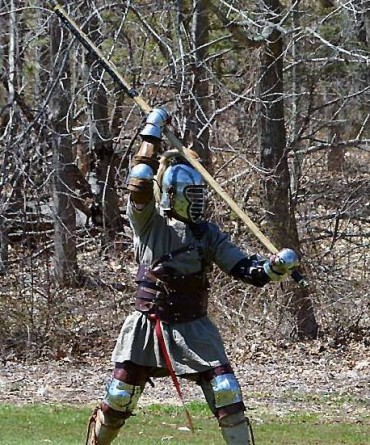 While the SCA combat lacks some of the overt philosophical and energetic under-layers as in Eastern Martial Arts, one can find important lessons and skills through its practice if they approach it mindfully. The field at the Pennsic War helps me to practice staying focused and centered in intensely chaotic situations. If I am acting out of fear, anger or pride/ego, I am already at a disadvantage and not concentrating on the task before me. It teaches how to balance intense focus on the immediate challenge before you and broad situational awareness of what is happening around you.

You’ve been a vocal enthusiast and longtime student of permaculture. Do you feel like this is an important subject for people to learn about and why?

Well, it’s really only important for people who like to eat food, breathe fresh air and need clean water to live. I guess it might also be important for anyone who lives in a climate other than the tropics or Mediterranean and can’t just roam around naked picking fruit.

There are a host of perils facing us as a species, largely self created. As one starts to recognize the implications of peak oil and climate change, the myriad of problems and potential solutions to each can leave one feeling dizzy, unsure of what is most effective and incapable of enacting any significant change on a personal level. The Ethics and Principles of Permaculture can help provide a roadmap for the individual to take direct actions and understand the great power of many small actions. 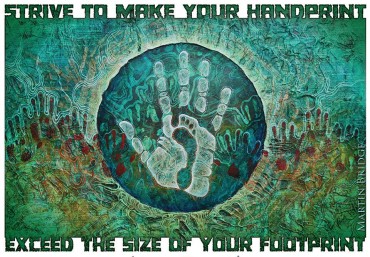 You’ve been known to use some unique materials in your artwork, even going so far to use plant silks and fibers to create texture or super fine lines. What’s the most unconventional material you’ve incorporated into a painting?

I might point specifically to the “Guardian” Mask I completed in 2007. While it’s primary material was rice-paper and glue with some copper wire to support the antlers and tines the materials included: fungi, plant matter, snakeskin, hornet nest, deer, elk, boar, bear, buffalo, bird, moose, minerals, mirrors, marten and Martin. 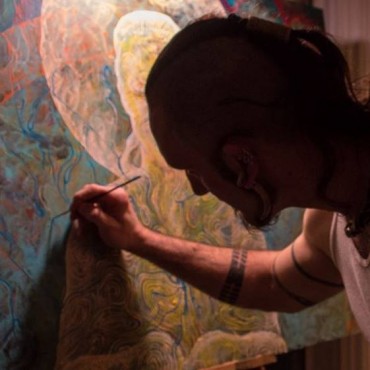 Martin hard at work on “An Unorthodox Solution”, depicting the unusual treatment of chronic cluster headaches with psilocybin mushrooms. Martin is an avid student of mycology, the study of fungi.

You gained quite a bit of recognition for your portrait of Zoe Jakes (of Beats Antique), called “Deer Dancer”. Do you feel as if music and art inform each other? Does music inspire your work and in what way?

Absolutely! It is a rare occasion when I am not playing some music while working on one of my art-pieces. Turning on music is like instantly flipping a switch in my brain. Each different artist and song will draw a specific feeling or emotion out in me, and if I want to bring that feeling into a piece all I have to do is hit that track and I am right there in my head and heart. Looking at that particular work, I had the track “Sweet Demure” on repeat for a big chunk of the time I was refining it at home after starting it alongside their performances in Brooklyn in 2013. That piece also has the additional level of being inspired by another art form in trying to capture the essence of a moment of Zoe’s masterful Dance… to be completely transparent I struggled with some of the subtleties of the pose and feel I fell short of what I would have liked to have accomplished in that. I have incredible respect for their dedication as artists and greatly admire how Zoe and David have used their individual craft to support and propel one another forward. 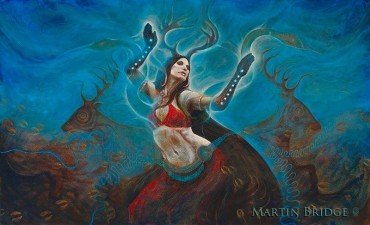 Catch Martin Bridge at the Unifier Walpurgisnacht Black & White Masquerade in Montague, MA on April 30th and at Lighting in a Bottle in Bradley, CA over Memorial Day Weekend!

The Bridge Brothers Online//The Art of Martin Bridge on Facebook

The Art of Martin Bridge on Liveheroes

New Year is the minute when We All Need to Start on an Excellent note….