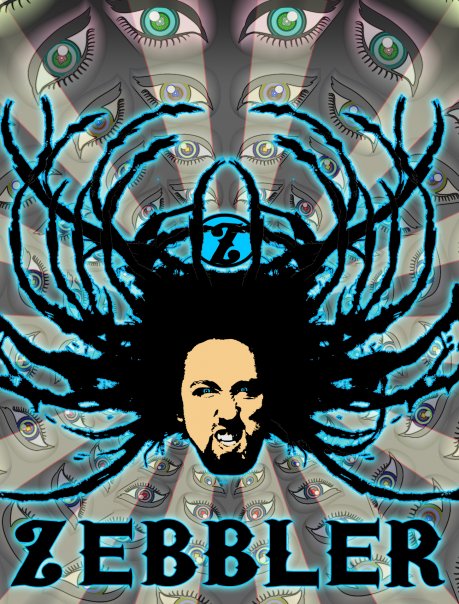 I’ve been a huuuge Zebbler fan ever since the infamous Mooninite Incident/Boston “Bomb” Scare in 2007 and the uproarious press conference in which he refused to talk about anything besides 70’s haircuts … creator of the Shpongletron, one of DJ Magazine’s Top 20 VJs, a true renaissance man and rockstar from Mars, he is a great inspiration to me – I was so excited to sit down with him and pick his brain. Check out our conversation on the Shpongletron, Zebbler Encanti Experience‘s tour with EOTO, breaking news on his Burning Man debut, his ideal immersive art project, the future of audio-visual technology and more.

Within the past few years alone, Zebbler has performed at well over 200 shows all over the continental United States. The popularity of his experimental solo HD performances has propelled him to the number 12 slot in the Best International VJ competition put on by London-based DJ Magazine. Zebbler was recently also voted the Best Visual Artist in Boston by the readers of Boston Phoenix.

Zebbler’s visual performances have a genuinely live feel. He often uses multiple cameras, a vast library of custom content and heavy visual processing to latch on to musical rhythms, emotions and concepts on the fly. The resulting visual tapestry is always in sync with the music and the audience, adding an irreplaceable element to any show.

To promote Boston electronic music and visual culture to the world, Zebbler has recently co-created an arts and media label Vermin Street. Under the label umbrella he performs with his a/v duo act,  The Zebbler Encanti Experience. Their goal is to continuously push experimentation and bring new technologies and art to the dance floor.

Having completed one of his biggest feats up to date – an 18 feet tall video mapped performance structure for  Shpongle (entitled The Shpongletron), Zebbler is planning a massive US 2011 tour. He is also taking care of his new monthly No Tomorrow (@ club Machine, Boston), producing a full-length a/v album with Z.E.E.and beta testing custom-made video-jockey software, entitled “Zebblertron” – designed by SF based video artist Interim Descriptor.