The Bay Area jam scene’s got a little known secret, and it’s called the Hangtown Halloween Ball. In a land acclaimed for its premier role in the electronic music world, where synth is king and the once-a-year scramble for Phish tickets leaves you empty handed, it can be a little bit tricky to get your fill of strings and horns, and it feels almost as if the jam and bluegrass scene has gone underground. But fear not, for there is still a festival where the sounds of fiddles fill the air, banjos twang in tune, and renditions of your favorite classic rock ditties pluck at the strings of your heart.

The 4th annual Hangtown Halloween Ball, which will take place October 24th-26th in Placerville, CA, is the lovechild of 3-night headliner, Railroad Earth, as well as High Sierra Music Festival. Located a mere two and a half hours from San Francisco, with ample camping that’s spitting distance from the two outdoor stages, running water, a grocery store just across the road, and a fabulously-decorated indoor venue for late-night sets with no specified end-time, attending this laid back festival is a no-brainer. Taking place just before Halloween, this festival is even more costumed than your typical summertime affair, and that is further encouraged by daily costume themes. Friday night Railroad Earth will be accompanied by the Hangtown Halloween Orchestra for an all-star jam. The festival is also family-friendly, with activities for children in the KidZone, workshops available for grown-ups, and vendors with beautiful crafts for everyone in between. 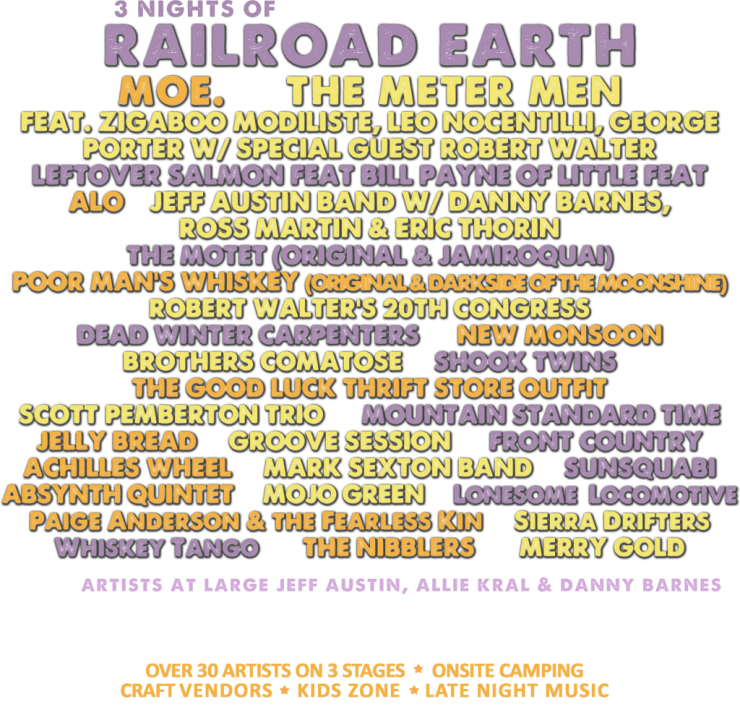 This year’s guest headliner is Moe., one of the few big jam bands that deigns to grace the west coast with its presence more than once a year. Leftover Salmon will be joined by Little Feat’s Bill Payne, and Northern California locals ALO, The Dead Winter Carpenters, and Poor Man’s Whiskey are sure to be favorites as well. The Meter Men, who have been making a comeback since their shows with Page McConnel of Phish, will undoubtedly be a special treat. But the funk doesn’t stop there! The Motet, Jeff Austin Band, The Nibblers, and Mark Sexton Band will keep you grooving all night long. If twanging bluegrass and soulful vocals are what you seek, then look no further than The Brothers Comatose, Shook Twins, and Mountain Standard Time. Just in case all these instruments make you forget where you are, electro-funk band SunSquabi will be there delivering the jamtronica. Then there are the bands that defy genre-categorization like Scott Pemberton Trio, Achilles Wheel, and Jelly Bread. And this is just a taste of the incredible lineup Hangtown Halloween Ball is sporting this year!

Perhaps Hangtown’s greatest feature are the Artists At Large. These are artists who hop from stage to stage all weekend long, making guest appearances during scheduled sets and holding intimate workshops. Jeff Austin will be making the rounds, and we’ll be sure to see a fair bit of fiddler, Allie Kral and banjoist, Danny Barnes as well. Be sure not to miss the late night shows with the Brothers Comatose and Jeff Austin Band Friday night, ALO and a special funky Jamiroquai set from The Motet Saturday night, and Poor Man’s Whiskey and Dead Winter Carpenters Sunday night. Late night tickets are not included in the festival pass, but the extra $15-20 is well worth it.

In case three days of fun isn’t enough for you, this year you can get there early on Thursday and enjoy a few intimate sets withNew Monsoon, Tracorum, Chatter Box, and McCoy Tyler Band. Don’t forget to bring your own instruments for some renegade jamming with friendly neighbors, and perhaps even a star from the lineup! The secret’s out, so now you know – Hangtown Halloween Ball is the place to be. Can’t wait to see you there! 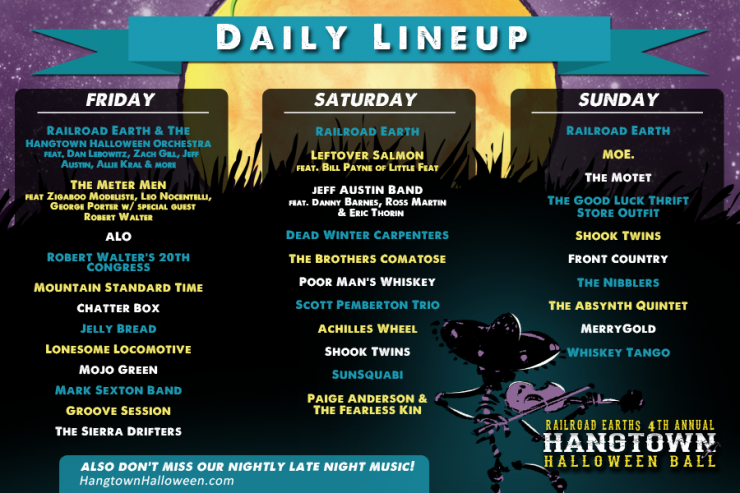 KEXP has long been a radio station that has catered to the experimental and alternative….