A new name is on the lips of live music aficionados in the Bay Area and beyond this year. SunsetSF and Silent Frisco—previously sister companies—merged earlier this year, uniting as a singular force under the name HUSHconcerts. Already well known and respected for their amazing parties and so-called “silent” discos in the Bay and at festivals and events all over the country, the unification of the collaborating companies means only more good things in store. 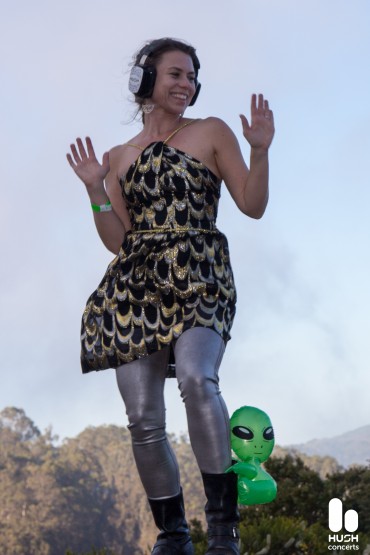 The two organizations decided to relaunch under one new name in order to avoid the confusion that sometimes arose due to a similarly named Bay Area party crew, Sunset Sound System, and to clarify the reach of Silent Frisco, whose name could be perceived as more geographically limiting than the reality of their far-ranging events. For years now Silent Frisco has been throwing amazing parties (at which DJs pump their tunes through channels that are piped into wireless headphones) at numerous festivals and at all sorts of fun locations. From Treasure Island and Ocean Beach in the Bay, to the lighthouse in Santa Cruz, to the Santa Monica pier in LA, these loungey dance parties always have a unique vibe to them.

HUSH announced their rebranding in early April and celebrated the transformation with a free party for fans at Mezzanine in SF. The Launch Extravaganza featured The Funk Hunters, Chali 2na, Motion Potion, Forrest Day, and more. The party was a smashing success and HUSH just kept rolling out the killer lineups from there. The Polish Ambassador, The Floozies, GRIZ, Fort Knox Five, and California Honey Drops are just a small sample of the incredible acts that the company has had a hand in bringing to venues in the month after their launch. They’ve thrown five separate silent discos (dubbed “HUSHfests”) already, plus setting up at Lighting in a Bottle and Bottle Rock, and their biggest HUSHfest yet is coming up this weekend at Ocean Beach. Every single show has been noteworthy not only for the exceptional talent, but because the vibes have been utterly on point.

HUSHconcerts’ show on May 28th at Mezzanine featured Dirtwire, Bluetech, and Kaminanda and has to be one of their best lineups to date. The fact that the show took place on a Thursday night allowed for an uncrowded, intimate, relaxed environment that created the perfect vibe for the booked talent. 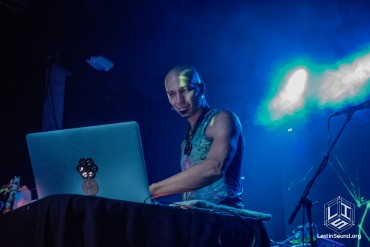 Helping to set that vibe was the crowd—white-mustachioed, wizened elders exuding calm conscious chi, blending with the eager energy of nubile, face painted, flow toy enthusiasts and fringe clubbers. Strangers standing next to one another became friends as they exchanged glances and compliments. Dolphin Boy, a notorious Bay Area character who dresses partially like a clown and incorporates a pair of toy dolphins into his dance moves made his presence obvious. Flowy-pantsed and dread-locked burner-types danced in spacious pockets of blue light on the sparsely populated dance floor during Kaminanda’s tribal set. Absent were the burly security guards that frequently elbow their way through a tightly packed clubby crowd on a more typical weekend night at Mezzanine.

Open space on the dance floor began to disappear as more folks filtered in during Bluetech’s set. Futuristic Mario Kart racetrack visuals flashed on the wall behind him as his minimalist and jungle-reminiscent beats moved people’s hips and hands in swoops and spirals. Small groups of friends burst out spurts of contact improv dance as solitary souls swayed, eyes closed in meditative states to the music. Positive vibes were high and it was clear everyone present was thrilled to be there and felt comfortable expressing themselves. 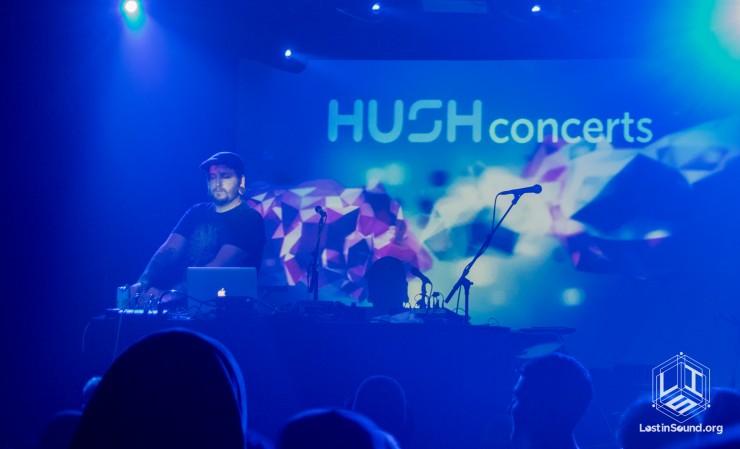 That positive energy was palpable by the time the stage was rearranged to make space for the many instruments to be played by David Satori (of Beats Antique) and Evan Fraser (of Stellamara and Hamsa Lila), the talented duo that makes up Dirtwire. Their latest album, Rip Tide made it to the #1 spot on iTune’s world music charts with nothing but positive reviews. Dirtwire’s sound—one that draws upon traditional world beats, downhome twanging, and an impressive array of exotic instruments while incorporating synthetic electronic elements—is unlike anything else being made right now. Satori and Fraser were relaxed and casual, interacting with the appreciative audience as they seamlessly switched from mbira to banjo, melodica to mouth harp, calabash to harmonica. They played a number of songs from their new album, humbly informing the crowd that this was their first time performing those numbers. The performance went off flawlessly and was met with enthusiastic approval. The crowd was particularly pleased when Fraser introduced The Well, a favorite from their earlier album The Carrier, which he explained was inspired by the concerning drought California is experiencing. 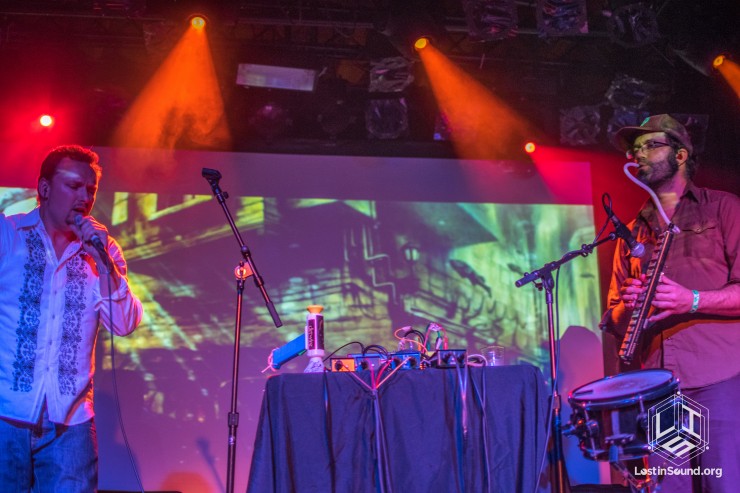 Throughout the performance, artwork by Brin Levinson, which is featured on their albums, was projected behind them. Realistic animals spliced into urban environments perfectly encapsulated themes from the duo’s music and struck at the heart of what their sound evokes. Nobody was ready for the show to be over when the artists took their bows, snapped a photo with the crowd and left the stage. Their three-song encore was witness to some of the most uninhibited and interactive dancing of the evening, and when they finally put down their instruments for good, beaming faces were enveloped in warm embraces as friends lingered on the dance floor, basking in the afterglow of a spectacular instrumental performance and participatory crowd of beautiful fans.

The exceptional vibes and phenomenal talent of the show perfectly exemplify the kind of event HUSH can be counted on to throw. Whether it’s a DJed party, a live band, or one of their ever-popular HUSHfests, these events are not to be missed. Be prepared to herald HUSHconcerts as one of the top party throwers this summer. If you didn’t catch this show, worry not; HUSH has a whole bunch of other amazing events coming up! 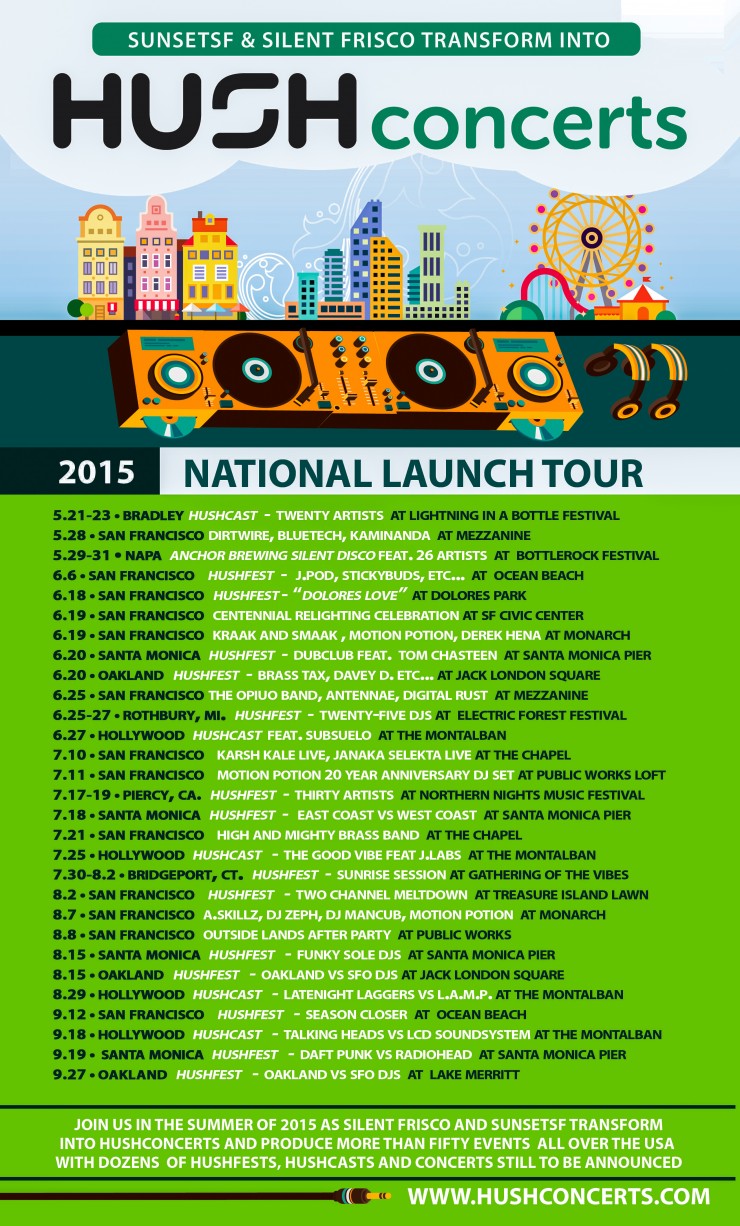 Such a hefty schedule can be hard to keep up with! Each and every one of these events is special and unique in its own way, but we thought there are a few noteworthy gatherings you definitely want to mark on your calendars: 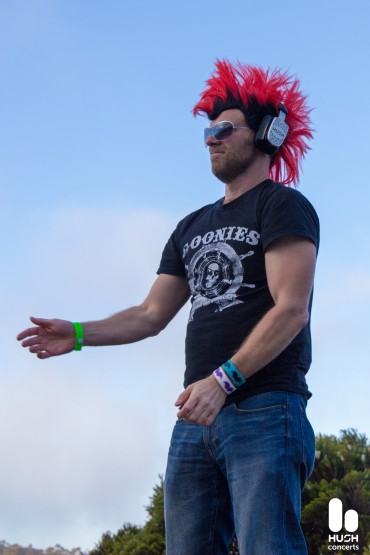 THIS SATURDAY! 6/6 HUSHfest at Ocean Beach – JPOD, Sticky Buds, and more – This will be the first silent disco at Ocean Beach of the year. These parties are always a blast and have been known to sell out. Whether you’re jamming out with your hoop atop the retaining wall, lounging in the sand chatting with friends, or splashing in the surf at the edge of the ocean, it’s impossible to deny what an incredible location this is for a party. Two channels of music offer something for everyone and this family and dog friendly event is always a hit with little kids. Grab your tickets HERE!

6/18 HUSHfest at Dolores park – Dolores Love – Come check out the newly renovated Dolores Park with the HUSH crew! The city has been sorely missing Dolores and is celebrating the Grand Reopening with a free silent disco. Kids’ party 3pm-4pm, Adults’ party 4pm-7pm.

6/19 at Monarch – Kraak n Smaak, Motion Potion, Derek Hena – Some of these names have been in the music game for a long time, and their experience is evident when it comes to creating a funktastic night of dancing.

6/25 at Mezzanine – Opiuo Band with AnTenNae and Digital Rust – Hailing from Australia, Opiuo composes fun, funky, fresh tracks that always get a dance floor shaking, with huge smiles everywhere. Managing to strike a wonderful balance of pleasant happy vibes with dirty, groovy, glitchy beats, his music connects to the body as well as the soul–all with his solo sets! It is a growing trend for producers to incorporate live bands into their performances, and has invariably led to some of the best electronic shows to date. The full band performance is sure to highlight the funky aspects of Opiuo’s music, and it will be interesting to see how they break down his complex master productions into a band format.
This show will likely sell out! Grab your tickets HERE while they are still available! 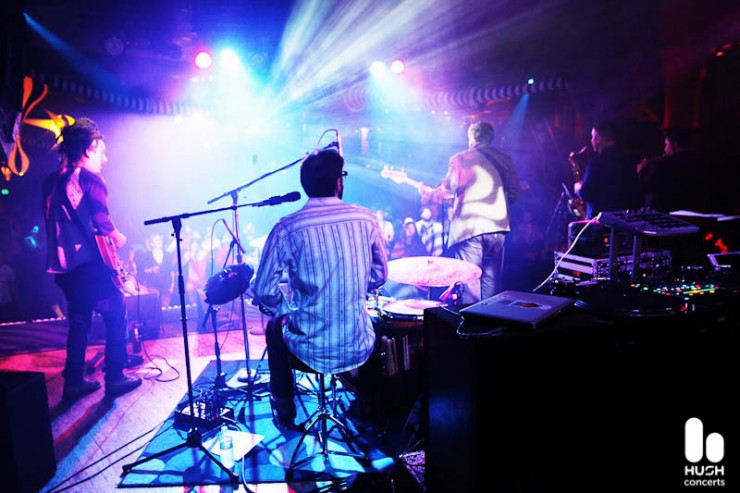 6/20 HUSHfest at Santa Monica Pier – Dubclub feat. Tom Chasteen – In case SoCal is getting jealous of all the goodness HUSH is bringing to the Bay, here’s one for you! A super fun party at an amazing location.

7/10 at The Chapel – Karsh Kale (Live) and Janaka Selekta (Live) – If you haven’t been to the Chapel before, you’ll definitely want to make it over there for this show. The converted church is an absolutely stunning venue where these boundary-breaking artists will perform special sets with live band.

These are just a few of the many incredible events HUSHconcerts has coming up. Their impressive calendar is sure to keep your summer full of good tunes and as much fun as you can handle.

IF SUCH THINGS TICKLE  YOUR FANCY, CHECK OUT WHAT ELSE HUSH HAS GOING ON

Walter Merziger and Arno Kammermeier are Booka Shade. They believe that there can be no…