Sometimes you just walk down the street, and a new sound stops you in your tracks and an invisible rope pulls you toward it. This is how I encountered Moon Hooch. Walking down Grand Street in Williamsburg, I discovered Moon Hooch blasting away in the window front of a new bar/restaurant establishment. My intention was just to hear the rest of the song they were playing, but I ended up watching them for pretty much the rest of their set, regretting the whole time not having my audio recorder or my new video camera to capture some of this interestingness. 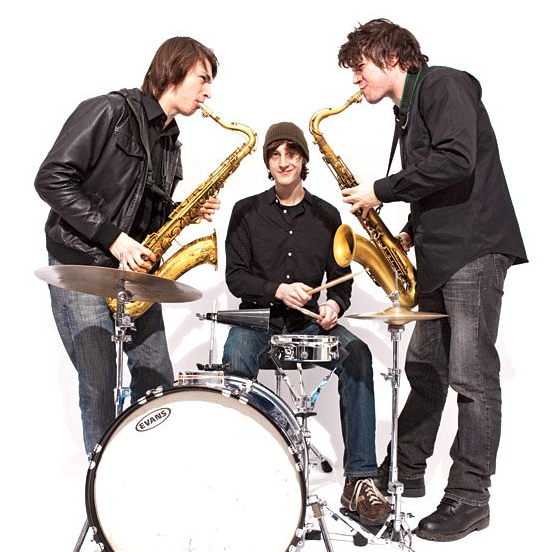 Moon Hooch is a Brooklyn-based collaborative trio (Mike Wilbur – tenor saxophone, Wenzl McGowen – tenor saxophone, James Muschler – drums) that formed in the summer of 2010. Their sound is a fusion of house, dance, drum and bass, jazz, world, and classical music. They even busted out some dub step by strapping some odd blue man group like tube contraption to one of the saxes that made it sound like a cross between an elephant, an alien scream, and a didgeridoo.

I recommend catching them live, they are really tight. Their next show is June 16th @ R Bar, NYC, Click here to RSVP but you may even be lucky enough to catch them in the NYC subway, just look for the large crowd.

Check out their BandCamp or their facebook for more info.

This is one of their songs that you can download for free from their bandcamp:
[wpaudio url=”http://lostinsound.org/wp-content/music/MoonHooch-9.mp3″ text=”Moon Hooch – #9″]

And a video of them jamming out in Washington Sq park:

Here’s a live mix from Djuma Soundsystem, recorded at a DJ set in Oslo, Norway….