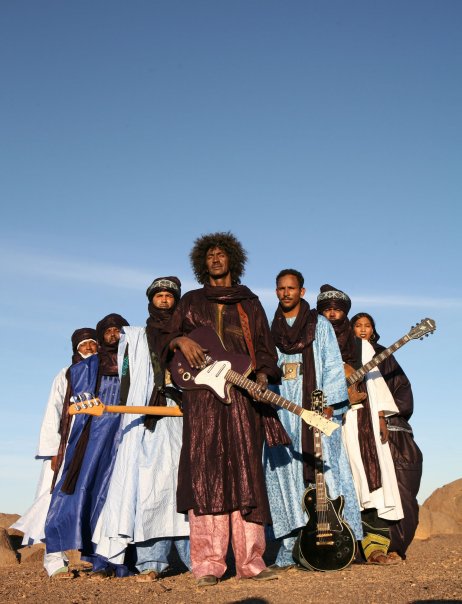 I came across a gem this morning while reading my friend’s horoscope, channeled by the brilliant astrologer/writer/activist Rob Brezsny (FreeWillAstrology.com)

“The band Tinariwen is from the Sahara Desert. Its members describe themselves as ‘soul rebels.’ Their influences include traditional West African music, Santana, Jimi Hendrix, and the Berber music of northern Algeria. I listen to them whenever I’m feeling wan and spiritually tired. Their infectious melodies and serpentine rhythms have a medicinal effect; they toughen me up, fueling the rowdy love I need to keep fighting for truth and justice. They’re your featured artist of the week, Gemini. As you face down the dangers of apathy, you could use the shot of courage and audacity they might provide.”

I came home to find my friend had posted a video of Tinariwen at the 2005 BBC Folk Festival, and thanked my lucky stars since this is some of the most unique, revolutionary fusion I have heard. With such a diverse range of influences, its not surprising.