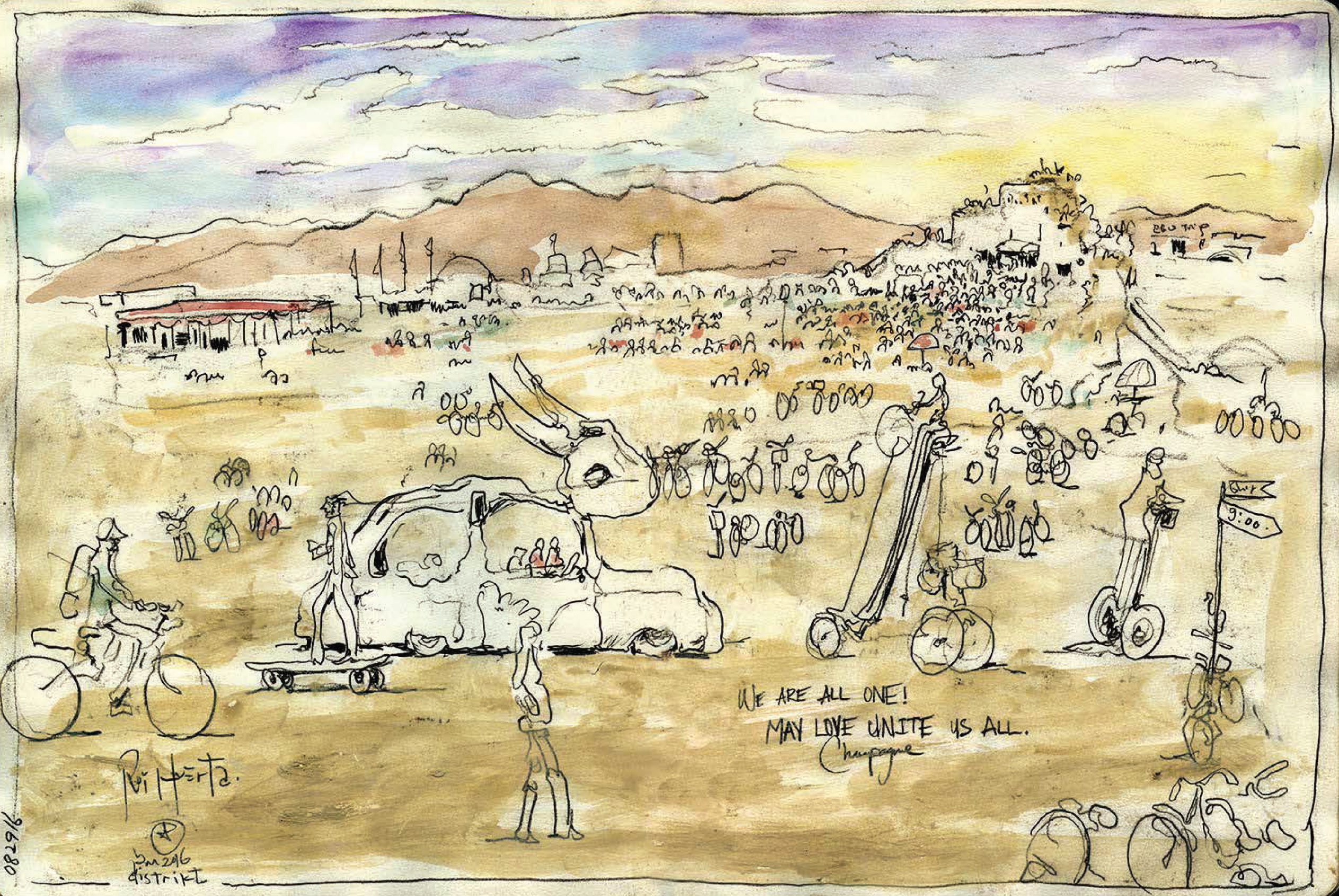 FUN FACT OF THE DAY:

The desert is this flat, blank, open canvas to be written upon with whatever we like. There’s nothing that reminds us of where we’ve been. It’s completely foreign. PEOPLE DO NOT LIVE HERE.

Long magical mystery tour short, I was finally able to obtain the name of the mysterious fellow (David Best) responsible for constructing that spooky AF wooden space nexus, better known as the Temple. You know, the same Temple that gave me a RAGING case of the willies, jimmies and Stan Van Gundy hot pocket fear sandwiches. OH MY GOD, MR. FLUFFY PEN, DO NOT GO IN THERE!

However, getting a person’s name and actually locating the whereabouts of such a man are two totally different mind-numbing adventure sprees altogether. I mean, where does one even begin to play a game of hide-and-seek out here in the middle of a goddamn make-believe city of 70,000 that runs on filthy booze, unbridled debauchery and no judgment whatsoever? It’s like, “Can somebody gift me a freakin’ tour guide already???? Preferably one with lots of fruit snacks. Oh, and alcohol too. A fuckload of Bartles & Jaymes. FYI BTW. Thanks!”

As much as a remote Farcetime sesh with a freshly laid Kanye Shart might’ve been the kind of pep talk my hopelessly wandering ass needed, I was ultimately without a compass, drifting in a giant sea of nonsensical clusterfuck happy hours. Meanwhile I’m thinking,

Where’s some of this goddamn ‘playa magic’ when I could really use it?

On that note, Mr. Fluffy pen, let’s fast forward through this mofo. Where should I begin? Well, ya see, first I got tossed into yet another sand blizzard, tried spotting Best inside some fancy “art car” cruise liner, was told I’d have to cut a check for 15 grand to board (wow, you guys must be really special!), shouted ‘Singularity University’ for the secret password, got denied, came back with that doozey about “man meeting machine in the year 2045,” still got denied, almost collided with a banana bike, asked about Best, was told to avoid 3 & C after dark, you know – unless I wanted to get hit by a colonoscopy bag, OF COURSE, ended up outside the School of Consensual Kink (don’t even ask), got invited back to an erotic sock puppet theater, broke into a series of interpretative cartwheels as a diversion tactic, looked all over Camp Plunderground for Best, got learnt up on “Cultural Appropriation” from a rather odd chap sporting women’s evening wear, PFFFFFFT… 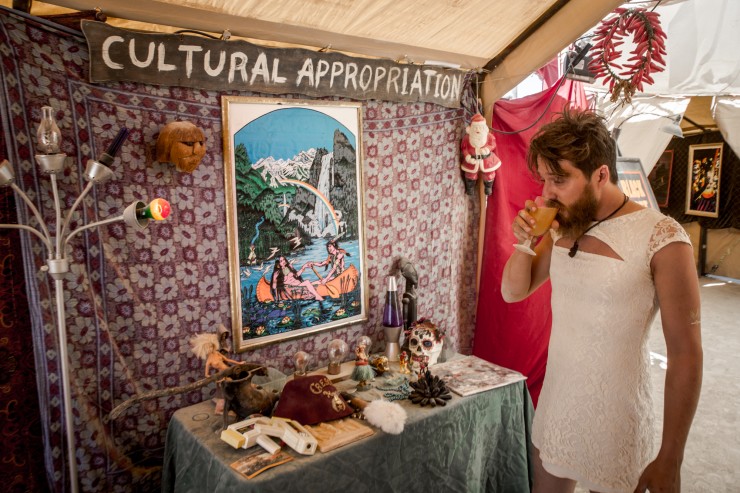 And then… And then!

And then after ending up somewhere off the corner of Quagmire & Fuck This street, I dang near gave up for the day. It’s like I had nothing to show for this everlasting wild turkey reach-around except for my common decency being violated at every turn. Who knew locating a Temple wizard would be such a monumental game of grab-ass? Before I could throw in the towel like a lil ole Nancy, a small wooden booth beckoned to me not far from the Esplanade. Oooooooooooooooooooooo. But what could it be? Let’s go find out. As I carefully approached the stand, a sign above reading “ADVICE” poked its filthy head out of the playa. 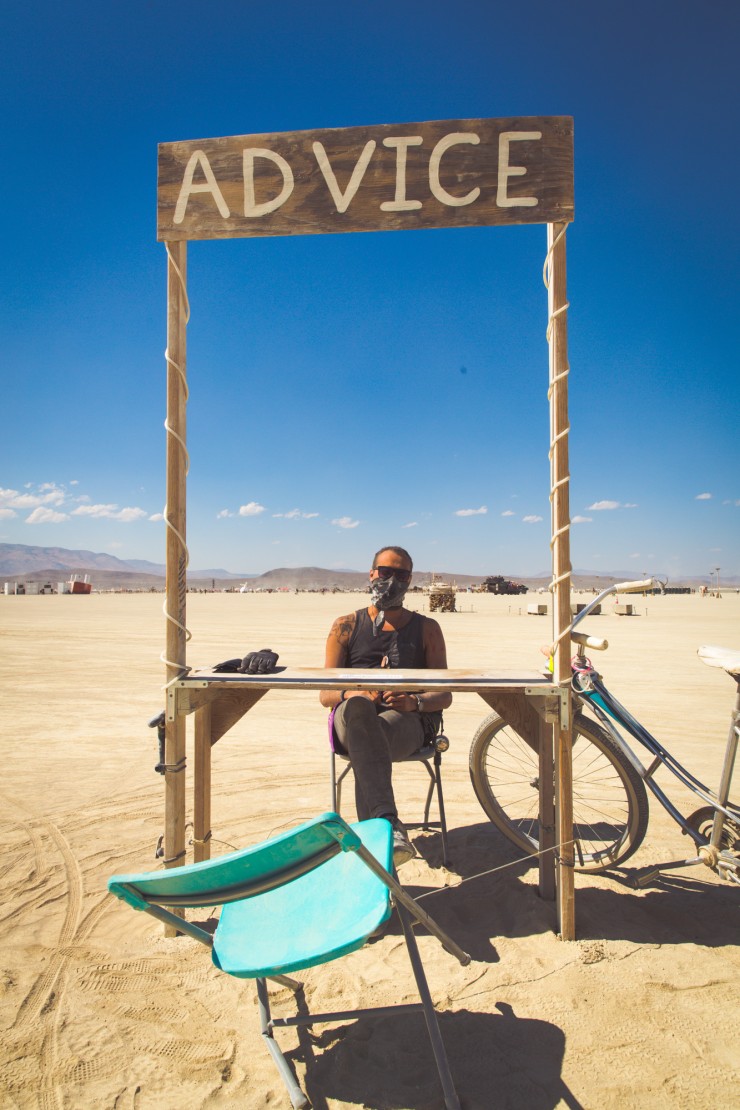 It was there I met a fascinating lad from this place called “New Orleans” who happened to be peddling free advice. And get this – he was commandeering a bike with this pink floppy sex device attached to it. Oh boy, just what will Burning Man think of next?! Apparently the fun-time apparatus was “MOOP” he’d discovered on the desert floor, which may or may not have originated from an organic dildo garden somewhere off in deep playa. Before we could even debate the merits of such a novel system, I posed my 3,000 million dollar question. Surely this guy knows where Best is. Surely. He has his own nutty advice kiosk for golly heck’s sake. Unfortunately though, this insight man could not directly assist me in my once hot, now flaccid wizard pursuit. Well golly-gosh-darn-it-heck. It’s ok Mr. Fluffy, it gets better! That’s because this curious Cajun proceeded to lay on me quite a fantastical stream of meandering goo, eventually weaving his way to this glaring doozey:

And with that tidbit of “advice,” it’s like I was being thoroughly tea-bagged with an Encyclopedia Britannica full of existential disarray:

Maybe I wasn’t meant to find this David Best character after all. Maybe it’s not what I ultimately needed. Pffffffffffft. Maybe that rain-on-my-fun-parade Temple foray from yesterday was nothing but a hologram. Maybe there’s no such thing as Burning Man. Maybe there’s no such thing as me. Maybe I’m reeeeally at a Save-Mart taste-tester stand right now double-fisting Dixie cups of some chicken teriyaki debacle. Tell me why again I can’t turn the Man to my heart’s effing delight like a goddamn rotisserie chicken?! I mean, I could just keep going with this shit. I’ll do it, Mr. Fluffy pen. I’ll do it. Don’t make me fucking do it!

“Or actually… maybe it’s really the Burn you deserve,” he then threw at me without warning. 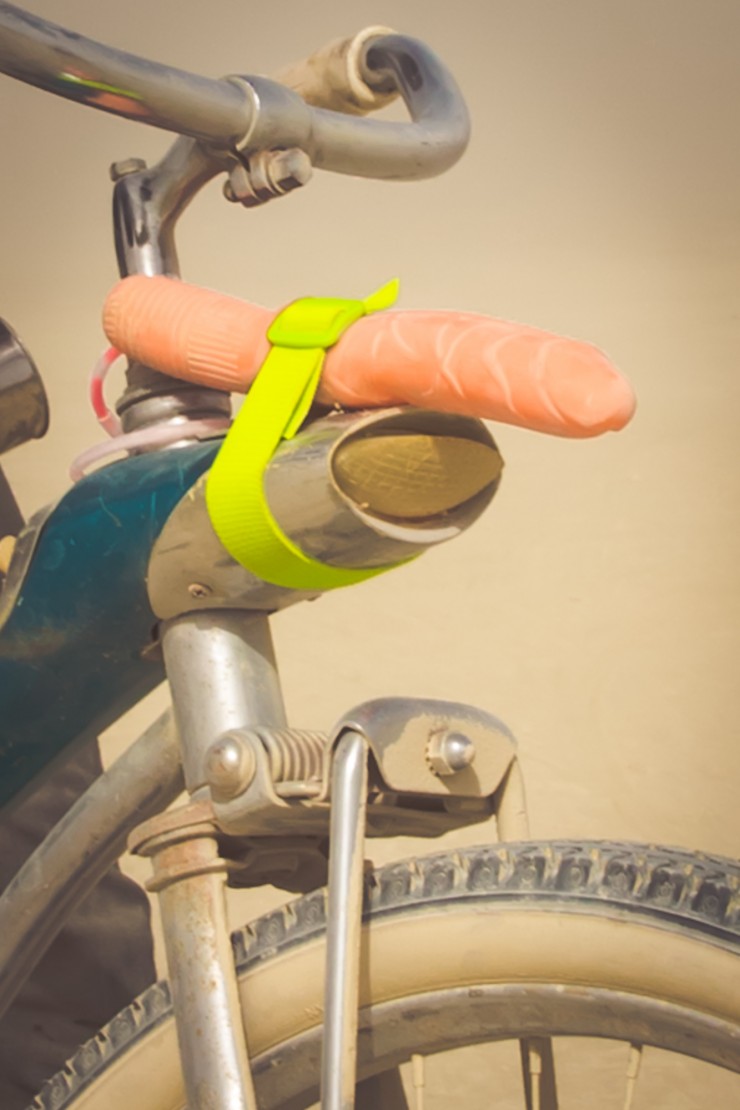 “What’s that lil buddy? There’s a fire down at the old mill? And the pyramids too?! AND the light towers where the line’s always too goddamn long to get in?! Get the fuck outta here!”

Right as I was on the verge of capturing the floppy thoroughbred – it suddenly stopped. That’s right – IT STOPPED. Ooooooooooo spooky! It was almost as if the lil fucker was taunting me. However, I knew any herky-jerky Twister moves might spook the thing. “Whoooooa, easy now. Eaaaaaaasy now.” It was at that moment when I realized what was actually transpiring. Sure enough, the pink neon dildo was pointing straight ahead from where I stood. It was guiding me ahead towards something. Looking up, there was a massive figurine thingy I knew I’d seen before out here. Even though it took a hot minute to rattle around in my psyche, I soon put 2 and 7 together. It was one of those wooden Hershey’s chocolate kiss ornaments. That’s right, Mr. Fluffy pen, just like the ones from the Temple! As I took more of a gander around, I began noticing even more odd looking knick-knacks strategically strewn about like an otherworldly chess match. Gosh darn golly heck, this had to be where the Temple wizard lived. It just had to be! 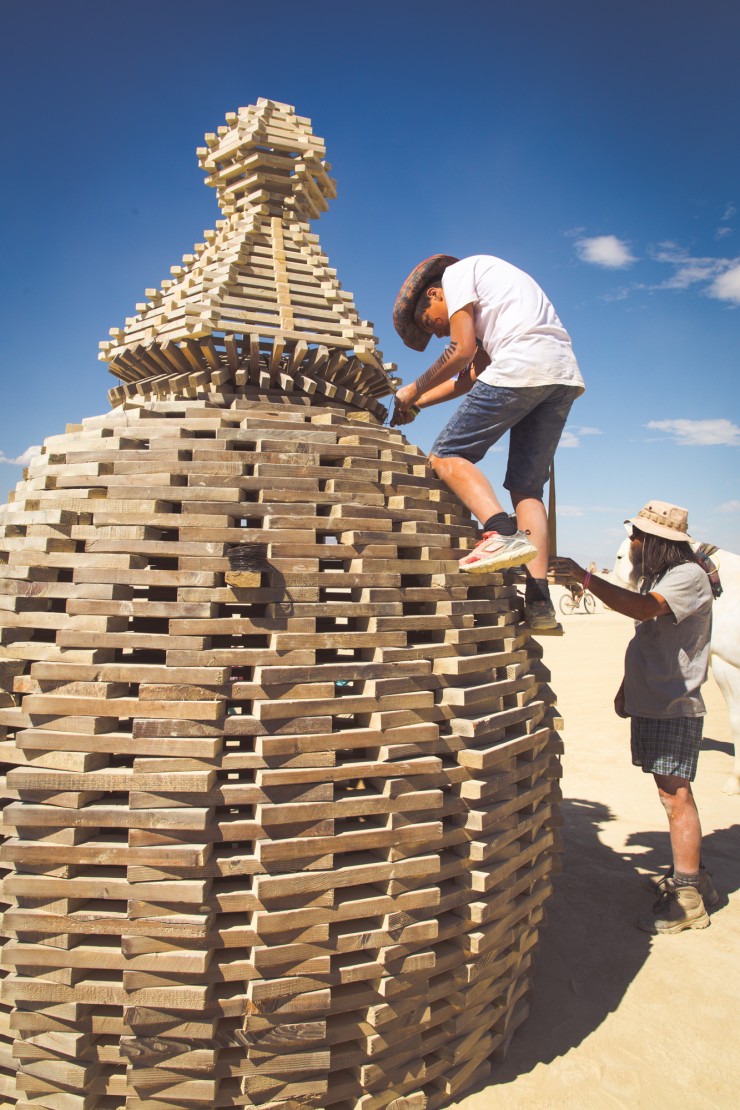 As I stealthily entered the compound, busy worker bee peoples were arranging wooden space configurations inside the campsite. I stopped one of them to ask about Best’s whereabouts, halfway expecting to be led on yet another goose chase adventure far away from where I stood. However – thank golly – he was a most agreeable bee indeed. Without hesitation, he pointed to the middle of the camp where a rugged, white-haired man in an Indiana Jones looking outfit was giving directions to a few others. Holy shitballs, was that really him? Nu uh. Like no way. I mean, not that I’ve ever seen a real life wizard before up close or anything. But c’mon – really? Would it have been too much to be riding a warlock chariot atop cannons shooting tigers and Friends DVD’s? I mean, I wasn’t really feelin’ it in the ole sorcery production department. What a bunch of kerfuffle. But you know what, Mr. Fluffy – the heck with it. One way or another, I was finally at the end of the god forsaken rainbow. And all it took was a neon sex toy infused with some good ole playa magic! Whatever the fuck that means.

So Mr. Fluffy, here’s the thing. Before you get toooooo excited, let’s just slow down a smidge-a-roo or two. As much as I’d love to say there was a romanticized meet-n-greet for the ages between the two of us, where the Temple wizard and I took turns heaving pancakes at naked heathen-banshees, it just wasn’t gonna happen. Crazy, I know! Long effing story short, for whatever reason, the Temple build went a couple days over freaking schedule. Look, I don’t know what happened. Annnnnnnnd because of this, Best was not in the most golly heck best of spirits. Pun intended. In fact, when I tried to introduce myself, he basically said to me “And just who the heck are you?” Well that was NOT easy!

As tempting as it was to whip out my old Glitter magazine credential I’d kept as a keepsake, it was ultimately useless. I was just another weird Burner weirdo in his eyes who needed answers about the god forsaken Temple. Take a fucking number. I mean, listen, it was obvious. He wasn’t gonna get all chatty Cathy with me right there on the effing spot. So much for the thumb-wrestling tournament. There’d be no Kalahari tea party for two. Fine – you want to be a Prickly Pete, then be that way! I get it. I’ll just send you a stupid postcard from the stupid BRC post office where C-3PO doesn’t even freaking work. I’m outtie 5,000 bitches!

But before getting my Carmen Sandiego collector’s edition bikini briefs in a bind, and just as I was turning around to wander back off into the freakshow oblivion, I heard him mutter something…

“Come back tomorrow morning around 9.”

Whooooa Mr. Fluffy, the goosebumps. Oh my goodness, you should’ve seen the swarm of goosebumps that swept across my sweet, innocent body when he said those majestically enchanting words of gold Flintstone vitamins!

However, right as I went to give Best a pre-emptive awkward hug, he was gone. GONE. Poof – the wizard had left the building. HE’D DISAPPEARED. Oooooooooo, now that’s spooky! It didn’t matter though. I was tickled, gosh darn it. Tickled! I’d be back fresh and entirely way too early. And I was gonna do my darndest to steer clear of any desert temptation land mines waiting to defile my soul between then and dawn. I’d return – ready to take on this David Best, Temple wizard extraordinaire. It was gonna go over like gangbusters. Like gangbusters, I tell ya! As I gleefully staggered into the swirl of filthy magical playa dust, I couldn’t help but sing a lil show tune chorus I’d heard earlier in the day at the good ole 11:11 lounge:

“Juuuuuuuuust the two of us

We can make it if we try

Just the two of us

Just the two of us! 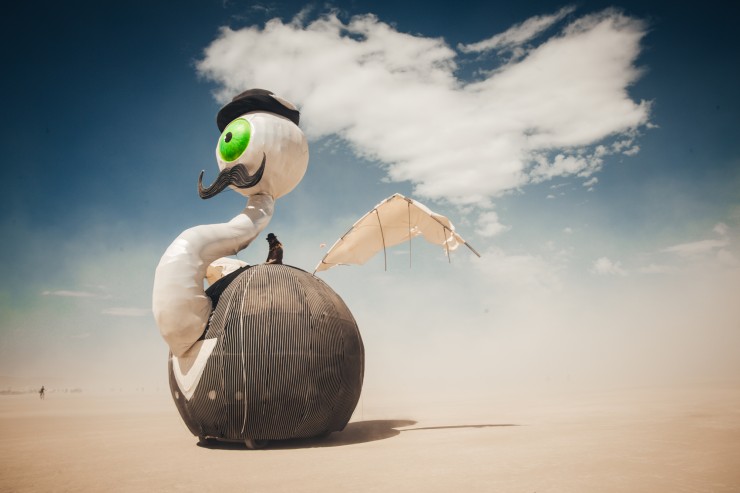 Lost in Sound Publishing Note: Join us next week for Part 4 of “The Blissful Idiot” project.

Special Thanks to Roy Huerta and Lovemore Creations

The Herbaliser Band, Session 2 came out in August and showed us again why live…