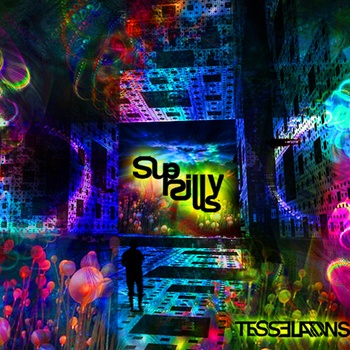 Supersillyus’ second album, Tesselations, drops today on Base Trip Records. A two disc (97 minutes) chromatic chronicle composed by one of the brightest producers the Northeast has to offer. Rob Uslan is a mad hatter, multi-instrumentalist and musical mathematician. Some of his layered combinations are so bonkers and gonzo that it is a wonder how they are held together so well. It’s like a contained atomic explosion or a swarm of bees. What it is that keeps such chaos beautifully together is beyond this listener’s means of comprehension. The album was mixed and mastered by Uslan and Michael McCarthy of Wobblesauce. He designs his album artwork and flyers like he designs his music, with a staunch innovative vision. Influenced by “traditional” IDM, ambient, noise, psytrance, and trip-hop, Supersillyus’ sound is infectious and always evolving.

“Many albums these days are too short. I’m trying to take people on an adventure, not a walk around the block. Now that so many things are online, musicians shouldn’t feel limited by the medium of CDs. Tesselations is as long as a movie. It’s feature length. There’s a reason why movies are around 90 minutes long. There isn’t really an excuse for musicians to only be putting out 40-50 minute albums. The album as a whole is an experience, not just a handful of tracks. It’s an adventure! That’s how I like my music, adventurous!”

“3 Shpere” – Liquid fractal sounds. Glitched out. Deep harp/string sounds layer up. Draws sounds from the first track. Tribal speak. Mandolin hook. Lighthearted drum and bass. A lot to hear and listen for, but each sound is strenghtend by the whole. Quiets down to kick everything into a faster tempo. Well timed delays. Another seamless and compelling transition into the next track.

“Demicube” – Eerie sprite moans. Pelvic pounding bass. Sounds like a phone ringing while you are under water or half awake and having an out of body experience. Familiar super silly recycled sounds from some of his previous releases, all the while producing a fresh beat. “And you’ll never ever stop until your mission is complete” Shpongle-esque delayed vocals, black hole closing blasts and booms.

“54M8471M3” – Glitched progressions create high pitched voices singing silly nothings. “Well well! Samba time baby!” is what this song is all about. Kick up your heels and let’s see what dance moves you got!  Half way through the song a loud “HUA” signals a strange section like you just fell into a dimensional time warp. “Now we go back!” The chorus speeds up and rises. Rapid synth stabs and sounds like a robot smacking its lips. Random tetradactyl screeches. The hook returns towards the end of the song, this time in a higher pitch. Hardy Winburn laughs as he lets us know it is currently samba time. Xylaphone ending.

“Dekeract” – Compton Bowman starts the song off with his baritone oration; “No different than your shadow if it were able to speak, it would probably say ‘Hey man you think there is like, a 3D thing that looks just like me and does all the moves that I do?’ No, that can’t possibly be right, but ah, there is!” Really cool drum sounds paired with entrancing piano progressions. I visualize the transporter from Star Trek…beam me up, Supersillyus. Bass drops and things get heavy and tribal. Steph Barrack’s vocals enter normally as Supersillyus puts an effect on her voice like she is shrinking. Seamless transition into the next track.

“Zoopanatural Boogaloo” – Robot crickets chirping. Glitched out breaks snap repeatedly over Barrack’s vocals. “I know that his is the knob that lets me turn all the other knobs… so do I turn it? or do I not?… Turn it!” Halfway through the song Supersillyus lets it rip with cartoonish sounds transitioning into the space organ and cello synth. Glockenspiel progression sounds suberb, layered by xylophone. We hear both beautiful vocals for a few seconds and terrifying monster growls.

“Conga Lineage” – A quiet repeating piano followed by a rising technological crescendo. Xylophone wars>thick tuba solo>trumpet tromp. Pretty ambitious section for electronic production. Quiets down with the piano and what sounds like the ocarina from Zelda. A new beat drops and the Saxaboom sounds off. Exuberance and celebration. The last minute of the song gets slightly darker and mysterious. Bowman’s vocals come in raving about the “knobs.” I really dig this song and love how it all comes together.

“Tesselations” – Thirteen minutes long. A lot more psytrance influence on this track. I like how I can hear that unique Supersillyus sound as an undercurrent to any style he tries his hand in. “Children of the 90s born in the 80s living in the thousands at a hundred miles an hour. We are mentally searching for our superpowers” is repeated throughout the song. Three minutes in, it sounds like a more jolly version of Shpongle’s “DMT.” More transfigured vocals. Wonderful use of strings, as Supersillyus’ classical composer alter ego is heard. Freakish childlike moans transform into full bodied hymns that drives the track into yet another landscape. “We all have superpowers.” He finishes off the first disc of Tessalations with a tranquil section. The sound of birds chirping, rain falling and thunder rolling is paired with  uplifting sonic synthesis. With this track he joins the ranks of Entheogenic and Androcell as creators of psychedelic sunsets of sound.

“Polyhedral Heathen” – Starting the second disc is like coming back from intermission to a cosmic opera. There is almost too much to reflect upon, but we journey onward. The first track on disc two kicks off with a rocking cello section. He flies around his e-drum kit like Jim Henson’s Animal. Halfway through we are serenaded by Caeli La’s electrified Sanskrit chants. He stretches and skips the vocals across the mind’s waters. I like how far off some of the vocals he recorded sound, like they are hidden and surrounded by the various layers he has constructed. “Wrinkle your nose, twinkle your toes and keep the wavy lines wavy” a voice chimes in, sounding like the mad hatter from the animated Alice in Wonderland. Resounding piano progressions ring out over the space beats. “All you really gotta do is suck on a snaggle tooth and lick a lime tree.”

“Neblasta” – Steph Barrack’s sultry voice. Billy “Batman” Gamble lets out the longest top of his lungs scream- the kind that most people would black out from. A distorted Asian mandolin sound plucks away. “Time travel bandits, destroying planets processing galaxies a million stars an hour,” is probably my favorite line on the album. You will soon learn to love it as well, I’m sure. Creepy clown laughs and  a rooster crow. The snare returns with a beat from “Polyhedral Heathen” that is now in 4/4 time versus 7/4.

“Affinity for Infinity” – Sounds like the beginning of a NOVA special on the Universe. The beat shifts from triplicate to 4/4. What starts as a slight psytrance beat transforms into heavy industrial trance sounds. There are points when this track sounds like a revised version of the Mortal Kombat theme song or the GO NINJA GO track from Teenage Mutant Ninja Turtles. The beat becomes more relaxed and airy as we hear the beginning progression return. The song is a mirror image of itself.

“Deemdreems and Tippytaps” – Supersillyus is clearly influenced by Nobuo Uematsu, music composer for the Final Fantasy video game series. This song sounds like a Silly take on some of the soothing music heard while playing those games. As the track quiets down, I visualize drops of liquid falling hard into a crystal glass. We are then compelled to “flex your tippyest of toes” as the song shifts to a glitchy almost drum and bass pace. With the high pitched synth work added, it almost sounds like trip hop for a minute.

“Particle-Beam Handshakes” – Echoes and rising, repeating sounds. Definitely one of my favorite tracks, the Silly drum n bass! Bowman’s deep voice speaks- “And I really do think that particle beam handshakes happen all the time and what we call it is actually…a mask for it. So people don’t really get into what exactly is going on.” You’ve gotta play this track on repeat a couple times because it’s just too short!

“Bury the Bat Goodnight Pratt” – For what may be the first time on the whole album you hear only one sound for a few seconds. Stripped down and built up slowly into what sounds like an ending. “Om Namah Shivaya Aum” Caeli La chants. Full orchestra sounds enter as I visualize the entire cast of the production coming out for a bow on stage. Some of the whimsical progressions remind me of an 80’s song… you can almost see the characters of some movie rejoicing about how they made it through whatever tribulations they were troubled by. “What I’m trying to say is that a peacock without it’s feathers aint nothing but a turkey. And I ain’t no turkey!” A statement for the freaks! The last three minutes of this song don’t sound like any particular genre, just unadulterated Supersillyus. The space shuttle has docked. Bravo.

Check out my review of Supersillyus’ debut album, “Grampaspaceshuttle” here: 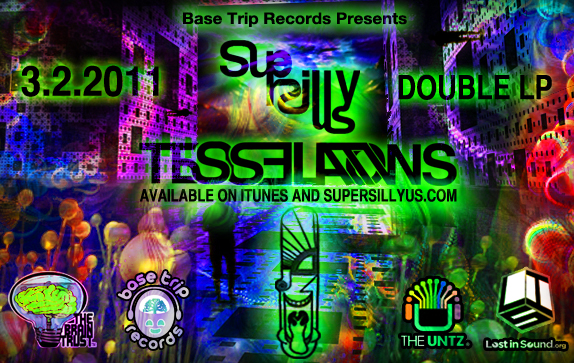 To lose body fat, you have to integrate large simplicity, plus supreme science because understanding…