I recently discovered SIXIS, a.k.a. Ben Wyss on Merkaba Music‘s 2013 VA Resonant Heart. Residing in Olympia, WA, this young producer hits all the sweet spots on my soul. Liquid glitch synthesis, dubbed baselines, and double time high hats. Smooth and flowing grooves that drip and morph into the next pocket of hyperdimensional sound design. I can’t help but imagine the surreal artwork of Salvador Dali while listening to SIXIS. Portals of liquified bliss that guide you elegantly across dream state lines. Heavy west coast influence, reminiscent of Heyoka‘s Gate Code and Soulacybin.

Take a deep breath, press play, sit back, and count your blessings.

[LiS] Your newest project. Tell us more about it, what is its premise, what are the feelings involved?

[SIXIS] At the moment I am working on some tunes that go deeper into the glitch and psychedelic dub realms. These are meant to be dark and textural, yet uplifting and melodic. I really try to convey a positive message with my music. It is supposed to get into people’s heads in such a way that makes them think about what is going on, and what is possible. My hope is that people will be able to carry this state of mind into the rest of their lives as well. Maybe they will even be inspired! In addition to the solo stuff, I’m also working on a really squishy tune with my good friend Shwex. His style is one of my favorites right now, and it’s been great jamming with him and geeking out on sound design. I also just started a remix of an amazing Mumukshu track, and I’m stoked to see where that goes. It’s really exciting to be able to collaborate with artists that have powerful visions similar to my own, and it teaches me a lot.

Where and with whom is the project going to be released?

Good question, I don’t know anything for sure but have a few labels in mind… I don’t think I’ll have another solid release for at least a few months though, since I spend a lot of time on each track and am also in the midst of finishing up my last year of school.

Describe the workflow/process you use to create a track.

I usually start with a really simple beat and a bit of a bass line. Next I’ll add a few textures and pads to start to get the kind of depth and harmonic structure that I want. Then I usually go back to really elaborating on bass sequences and sub lines to give the parts some of the dynamics that I’m going for. Once I have a decent amount of material, I’ll do a rough arrangement and start really filling in the gaps with all sorts of more intricate glitches and bits of melody. I bounce just about everything to audio so that I can process each sound individually and get a lot of variations from just a short clip. I’ve found that it’s best to leave myself a lot of space within the different arrangement sections at first so that there are more opportunities for me to come up with new ideas and variations. If I don’t do this, I tend to get hung up worrying about a tiny little sound when really I should be making a broader stroke.

First and foremost, I’d say that you’ve gotta stay true to what you think sounds good and will resonate with people that you connect with. Experiment a lot too, I’ve spent a lot of time just messing around with different sounds in order to figure out what I want to make. Sometimes you won’t even be able to think of a sound until you’ve found it, and often these are my favorite ones. At the same time, it is good to stay simple, especially at first. All of the parts have to be super solid, and with bass music it all starts with a tight beat and bass line. A big part of music production is just knowing what you want to hear, so just keep working towards that. 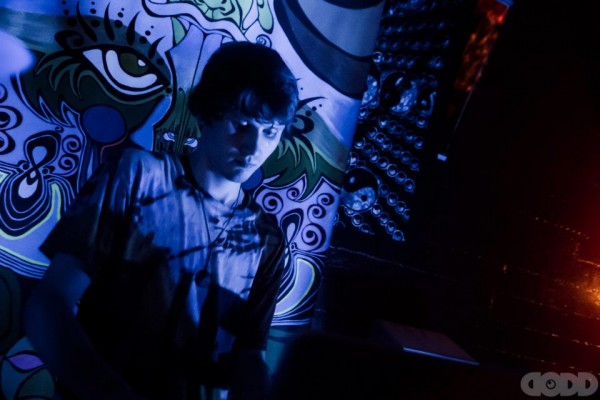 What gear do you use in the studio?

I use Logic 9 with a bunch of plugins. My favorites right now are Alchemy, FM8, Reaktor with Twisted Tools, and Zebra. Fabfilter and Sugar Bytes have some really great effects as well. I experiment a lot with different software, and most recently I’ve been trying to integrate some generative stuff from Max/MSP to make some really crazy granular material.

As for hardware, I have a Korg R3 that I use mostly as a MIDI controller and a QuNeo that is great for drum pads and effect manipulation. I have a bunch of different templates on the QuNeo for different scales or to manipulate samplers in the specific way that lets me really jam out with some interesting sounds. Another big part of my production process is field recording. I spend a lot of time just collecting and organizing sounds of all types, so that I can easily access them while composing. This really helps me get the distinct sound I’m looking for.

What Gear do you use live?

For live sets I use Traktor and my QuNeo. I do a lot of edits of my tracks as well, so that I have different and often condensed versions to play out.

Tell us a bit about your local music scene.

There is not a very big scene for bass music right here in Olympia, but there are plenty of like-minded people that are interested in it. For shows, I tend to go to Seattle where there is definitely a community that I have become a part of. There are a lot of people beginning to put on more gatherings centered around intentional bass music in the Northwest, and I’ve been connecting with amazing people from BC down to California.

How does your local music scene compliment and interact with the global music community?

Other than people booking touring acts from around the world, there isn’t a whole lot of interaction between the community here and the rest of the world. I recently released a track on Merkaba Music’s first compilation, which was my first international release. Then again, “international” with a digital release is a bit of a funny idea. There are a lot of really amazing artists on there though, and I am really stoked to be part of it.

What have been your main non-electronic influences?

The number one influence for me outside of electronic music has been the band Tool. I got into them way before I listened to anything like the music I make and they turned me on to Alex Grey, which then led me to festival culture and just about all the electronic music that I now love. I’ve always appreciated the complexity and positive message Tool communicates, and I try to translate a lot of those elements into my own music. I’ve also been really inspired by the visual arts my whole life and draw a lot of connections between that and music.

What is your view on the state of music industry and its relation to free music and piracy?

That’s a tricky question because I believe music is something that should be available to everyone, but at the same time artists should be able to make a living off of their work. To me, it seems that people should want to support the artists that they like but even then it’s not really that much money just from record sales. The only way just about anyone is able to make a living off of music these days is with constant touring. I guess that I don’t have a clear answer to this question, but if you enjoy the music you should definitely support it.

What are your other projects?

Well I’m in school right now studying music technology so I’m always taking on things for class. I’ve been experimenting with a lot with generative music in Max/MSP. I find this really exciting because it is a totally new way of being creative. Rather than constructing a song or sound yourself, you can make an entire system that will generate things for you. It’s almost as though you get to create some sort of organism by introducing sounds to an environment you’ve made and then seeing how these things evolve.

I have a few gigs lined up. I’ll be playing in Portland on March 14th, then going to the Santa Cruz area for a festival called Frosty Fractals the weekend of the 22nd. Also, I’ll be at Mas Sol Festival in Washington around June 8th and at Unify Festival in Colorado around July 26th. I’m sure plenty of other things will be coming together for the coming months and definitely the summer. I’ll also be playing some sets at Burning Man this year.

Where does the name of your project come from?

Ah, this is always a funny one for me to explain… At one point I was given the number six by a group of close friends, so that’s half of it. The other part is that before I moved to Washington, I had a band called IS. Once I moved and began really producing on my own, I wanted a name that described me as who I am and where I have been artistically so somehow I thought of sticking those two words together. What really sealed the deal was that it’s the same forwards, backwards, and upside down. Sometimes I wish that I had chosen a name that meant more to the people that listen to my music, but I think that will have to wait for another project.

Originally published on SolPurpose.com This rant started as part of a discussion about The Bloom Series,…