Signal Path’s first installment of their quadrILLogy, The Prosaic Fades, has been bumping through my speakers since its release on March 20th, 2011.  Comprised of Ryan Burnett (Guitar, Synths, Production, Vocals), Damon Metzner (Acoustic Drums), and Matt Schumacher (Electric and Upright Acoustic Bass), Signal Path has been rhythmically bending musical genres long before they dropped their first mastered EP, Clash, in July of 2009.

In today’s electronic music scene there are infinite sub-genres constantly meshing and evolving.  I often find myself listening to a new artist/mix/song and not being satisfied with how it sounds coming out of computer speakers, always praising the experience a live show has to offer.  As this also holds true for The Prosaic Fades, I am still able to blast these funky, fresh beats in my car and get that similar feeling of euphoria that the live show provides.  The creativity in production and the vast depths of styles explored are astounding – whether it’s the range of different samples from Niki Minaj to Burnett himself, or the funky baselines and sonic boomwomps, this EP definitely keeps it movin’. 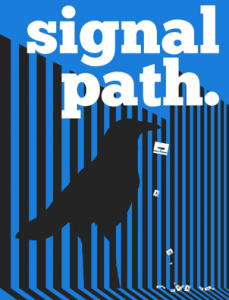 “Gangsterer Than Me” is a track that clearly stands out from the rest, most likely because of their collaboration with Vokab Kompany.  Normally a 7 piece indie-electro-hip hop group, MC’s, Rob Hurt and Burkey, bring seamless synergy with their voices and fresh lyrics to add another dimension to this groovin’ track.  Adding Vokab Kompany to a super funky baseline and some glitchy synths make this song the undoubted banger of the EP.

Whether you want to blast off into an intergalactic realm of rage or groove through one of those foggy mornings – The Prosaic Fades is suitable for all occasions. These dudes are veterans in the game that have stayed underground, and are sure to bring the heat at any venue nationwide.

The Prosaic Fades is the first of four EPs to be released on the first day of each season this year.  All of which will be released for FREE at Signalpathmusic.com.

Be sure to check them out on their west coast tour Signalpathmusic.com/Signal_Path/Signal_Path_Concerts

Use Your Head and Enjoy!!
-Satellite Man