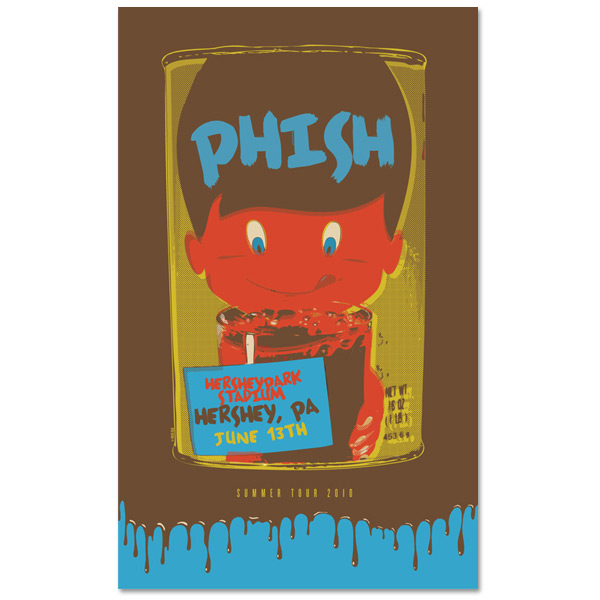 Jam enthusiasts have long argued about what it is that makes Phish so special. And while fantastic technical prowess, a lighthearted demeanor, and large-scale theatrics have certainly contributed to the success of the four nerdy guys from Vermont, the diversity of their immense musical catalogue certainly adds significant weight to the group’s brilliance.

And Phish wonderfully illustrated such musical versatility during their early summer performance in the chocolate capital of the world, Hershey, Pennsylvania. While storm clouds and rain spurts ominously loomed over the pre-show parking lot, the skies cleared just before show time, leaving a bright early evening when the band took the stage at Hershey Park Stadium and opened with “Gotta Jibboo.” And after picking up steam with “Chalkdust Torture,” the foursome dove into the many intricacies of “Fluffhead,” before soaring into “Funky Bitch” with keyboardist Page McConell flying above the rest of the group with a tremendous organ solo.

The first set then progressed into the bouncy, cheerful chords of “NICU” with big audience cheers as guitarist Trey Anastasio sang the poignant lyrics “back in those days when my life was a haze.” A powerful Anastasio guitar riff then gave way to a short, heavy “Horn” before shimmying into a rarely played treat “It’s Ice,” with flawless vocal harmonies, funky, in-the-pocket grooves from drummer John Fishman, and lyrics about battling with the demons within.

The set then moved into a light, crowd-pleasing “Bouncing Around the Room,” followed by a whimsical “Sparkle” that gave the crowd a taste of the band’s country-rock chops before Fishman and bassist Mike Gordon funked into a set closing “Split Open and Melt” with it’s sinister progressions leading the set into nightfall.

The second set opened with an explosive “Drowned,” followed by seven minutes of pure improvisation (or what LivePhish calls the “Hershey Jam”). The band’s dynamics were incredibly tight in this section of the set, but what was especially apparent was that the individual members were really listening to one another, contributing to a collective sound-well rather than performing in isolated sound bubbles. McConnell and Anastasio took turns playing follow the leader, pushing the jam into different peaks and valleys, and quickly responding to dynamic shifts, before ultimately firing up “Tweezer.” And while the group fumbled the opening riff, the jam illustrated more impressive, spacey improv with Gordon driving the rhythm with slap-bass bombs before slowing down and creeping into “Twist.” Gordon continued to drive the progression with a deep affected bass tone, before Anastasio revved up the opening notes of the next tune, “Piper” that virtually stopped completely before jumping into a crisp, melodic “Free.” McConnell then retook the lead with one of his signature tunes “Wading in the Velvet Sea,” before the group closed with an enormous 22-minute “You Enjoy Myself.” And mixing in an especially beautiful, McConnell driven “Bold as Love” to finish the show simply served as the cherry on top of an extremely well selected series of tunes.

And when considering why this performance was so good, the most salient variable seems to be set construction. While the first set was composed of a diversified series of concise, upbeat sing-a-long tunes, complemented perfectly by the early evening sunset, the second set featured less songs with extended, spacey jams that flowed in an out of one another with skillful dynamic changes. In short, it was exactly what you want out of a Phish show… and with a performance of such heavy magnitude, it’s safe to say that for one day, Phish made a city built on chocolate just a little sweeter.