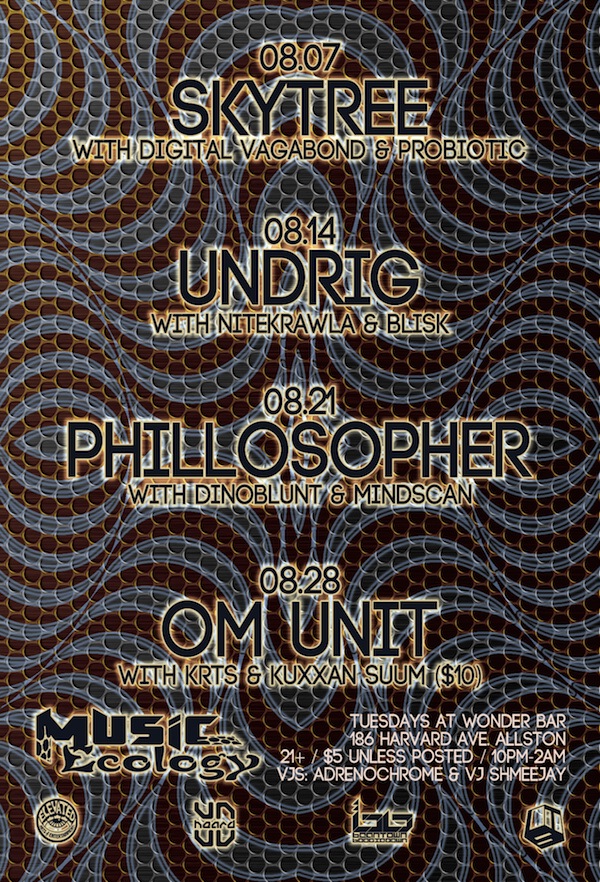 Music Ecology is a Boston based event production collective formed in the summer of 2009. Their weekly Tuesday night residency at Wonder Bar a well as numerous events throughout the city have exposed Boston audiences to numerous local, national and international talent.

Skytree
Skytree, aka Evan Snyder, started recording music at the age of 15, after the loan of a beaten Tascam tape deck cracked open the world of multi-track recording. Early “New Age” or synth-based albums by the likes of Tangerine Dream, as well as old pagan folk LPs from his parents’ record collection provided an early and profound influence. In the years hence, the Skytree name has appeared alongside artists such as Lotus, Bluetech, Phutureprimitive, Tipper, Bird of Prey, Excision and Bassnectar, among others, with many more to come. Skytree’s newest album entitled “Crystal Consciousness” was released on 11.11.11.
http://www.skytree-music.com/
http://www.facebook.com/skytreemusic

Digital Vagabond
Currently based out of Boston, MA, Digital Vagabond (aka Patrick Boyle) is a highly motivated, mystical and shamanic music and art enthusiast. He is a DJ, photographer, event-planner, manager, and fine-jeweler; a connected individual and man of action who wears many hats within an exponentially growing electronic music and festival culture. His name is essentially derived from his technological nomadic inclinations, embracing digital technology and cyberspace as symbiotic interfaces full of possibility– the potential for an unlimited network inseparable from nature.

Previous activities and collaborations to-date include DJ residencies at Music Ecology and Wobble Wednesday’s at Wonderbar (Allston, MA). He is on board as co-organizer and co-manager for Leshpestival annual Music Festival (Milerton, NY), and helped to organize the Brothership Connection Tour featuring lespecial, Space Jesus, and Blue BoyProductions. His Dj sets have opened for the likes of Two Fresh, NitGrit, OPIUO, KilloWatts, Skytree, Blue Boy Productions, lespecial and more.

Patrick Is a synergetic member of Electrogenic, an art collective of creative, inspired, conscious specialists who use their skills and talents to generate positive influence in the world; the collective specifies in modern media, viral marketing campaigns, HD photo, video, and audio processing. “Electrogenesis” a word used to describe the occurrence of cells connecting electronically in order to heal the body– powerful intentions and proof that “good” does exist in the world. Digital Vagabond is also a blog writer for the widely acclaimed online hub LostinSound.org, the go-to site where you can find eloquent writings and resources for the leading music and events in the current underground music scenes.

-Credit to Jackson P. Whalen of Technicolor Lenses for the bio. Spunning linguist.

Undrig
Undrig is a hot name. Being scrawled upon bathroom
mirrors by jet setting wastemen from Timbuktu to Portland Maine.
His sets are compromised of deep & thought provoking seamless autosynched blends from the beatport top 100 & youtube transcodes.

Purveyor of earthquakes in the foreign lands of Hollis. Selector of a vast array of music that would only work at peak hours. You can find him rocking the 9:00-9:45am time slot, playing electro house for a bunch of sunburned teenagers in k-holes! He also has the unique distinction of being the only dj who wears giant headphones around his neck whilst lurking at parties he never got booked for, yet mixes his entire set with no headphones at all when he finds time out of his busy schedule to accept a booking.

The mission statement is to bring crowds to a new level of consciousness through aleatoric compositions featuring complex polymetric rhythms and textures that harken back to the days of musique concrete’s prime. This is accomplished by blasting brostep tunes that sound like a poltergeist infested toolshed through a peavey guitar amp (for extra filth) while a castaway from Jersey Shore screams “”ARE YOU READY!?!”” through a megaphone for the duration of the 45 minute musical journey.

Since the beginning of that impossibly humble journey, he has shared the bill with such luminaries as DJ Sparkledink, DJ Muppetfucker and the Kentucky fried blues
band!

Current artistic endeavors involve a full scale tour of Red Hat Lady conventions & saving up money from parties to have headphones tattooed around his neckline as a tribute to the reassuring voices in his head that keep him soldiering onward.

Nitekrawla
“My life is driven to 126 beats per minute. House music is a a way of life.”
Born at the end of the disco era in the late 70’s NiteKrawla a.k.a. Anthony E was brought up during the birth of house music in the 80’s; however, he would not be introduced to this new style of music until his teen years in the early to mid 90’s. Once introduced, he realized this new and fresh style of music would put a grip on him that would develop into a passio. Frustrated by the lack of originality in the mainstream and influenced by this new style of music he began djing as an outlet for self expression in his teen years long before ever being able to step foot in a nightclub. He experienced the scene first hand by the end of his teen years and into his 20’s and he found himself throwing “mainstream” music and its remixes out the window and playing underground grooves exclusively. Now into his early 30’s and djing for more than half of his life he still continues to play hard edgy underground grooves that control dance floors.

Phillosopher
Adventure through wondrous excursions within your mind. A blissful listening experience that will energize your cells and your soul. Phillosopher is a project started by Phillip Surrett : Producer\Keyboardist for Jamtronica, Started in Charleston, S.C. where there is a high demand for psytrance, and other electronica genres. There are twists and bends, merciless glitches, tunnel-Snakes, wormholes, pornography, and multidimensional creatures, that dwell within this music. The music is intended to capture the moments you might have while enduring a psychedelic vision into another realm, where the rules of here do not function, and your perceptions are as you create them to be. You will be exposed to numerous sounds from around the world that will launch you from your body and into the spirit world of light! Phillosopher has had the pleasure of sharing the stage with artist like: EP3, The White Russian, Illy Walsh, Jonoftheshred, The Guerilla Groove Network, and InterMixture. Phillosopher works with Deepen My Thought Productions and is always working to bring you new raves, and new waves to bring you to the top of your chakra chain.

Om Unit is an electronic music producer and DJ from London.

One of many, but with a very distinctive sound, Om Unit has already captured the minds of beat fanatics with his work to date. Style-wise you could say ‘post-genre’ or just ‘electronic beats’. Genres are like borders, rapidly becoming obselete when we see the world today as having an ever-increasing merging of styles and influences. Put simply, it’s electronic music.

Jim Coles previously worked under the name 2tall, as a competitive DJ (DMC/ITF etc.), a live performer in the UK and Europe, working with turntable and samplers, and producer of several albums, including 2007’s ‘Beautiful Mindz’, a project put together with Dudley Perkins and Georgia Anne Muldrow. Other albums include  ‘Shifting Tides’ (2004) and ‘The Softer Diagram’ (2008). Beyond that, his work with Dented Records led to productions and collaborations with UK rap acts, such as Foreign Beggars, Jehst, Kashmere and Kyza, as well as production and turntablist work on the ‘United Colours of Beggatron’ album.
http://www.facebook.com/omunit

Krts (Project Mooncircle)
1984, Halloween night and the young boy is ready to put on his Go-Bots costume on, and escaping the McDonalds drive-in with a happy meal. A Blue Chevet carrying the happy four-year-old black male, and his father driving. “”Hey Kurt, I have something you’re gonna like.”” His father says with a hint in his voice that the cassette he is placing inside the deck is going to blow the four-year-old child’s mind. I read the title of the album, “”Are you Afraid of..”” The track comes on with haunting samples, distortions, and melodies that are soft and manipulated. The song sounds like a garage with power tools creating music to the boy. His mind ventures through realms he’s never viewed inside his mind. His heart races with excitement, and an energy never spoken before. He clenches harder to the empty cassette case. “”The Art of Noise””, as his father grins paying attention to the street going towards home. Kurtis Hairston was in no way, afraid of the art of noise. Instead he embraced it. Held tightly to it, and it became the basis behind his side of electronic music. And then, is how it began.
http://www.facebook.com/Krtsmusic

kuxxan SUUM (end fence)
The artist, kuxxan SUUM, is inspired by the mystic galactic tradition and extra-human communicative-traits of the classic Maya.The artist aligns contemporary and antiquated sounds of the human race in a musical space that reflects and raises awareness of a lost connection to the galactic core.
Based in Harlem, NYC, and co-founder of the mighty free-label, end fence, kuxxan SUUM’s music is available for free at
www.endfence.com
www.soundcloud.com/end-fence

For this and future events visit http://www.musicecologyboston.com/
Find Music Ecology on Facebook at http://www.facebook.com/MusicEcology
Follow on twitter at http://twitter.com/music_ecology
Live recordings from Tuesday nights at http://www.soundcloud.com/music-ecology