OMNI is Minus the Bear’s first studio release since 2007’s Planet of Ice. It is the Seattle-based prog-pop rockers’ fifth album since the band’s debut in 2001, and their first release since signing to LA’s independent label, Dangerbird Records. The record’s name is derived from a newly acquired vintage Omnichord synthesizer that brilliant guitarist David Knudson has donned.  Knudson programs the hand-held grey Omnichord with one hand, and strums the instrument’s touch plate with the other in a harp-like motion. The electronic groove of “My Time”, the record’s first single, is shaped around the instrument’s unique sound. Produced by Grammy Award winning producer Joe Chiccarelli (The White Stripes, My Morning Jacket), Omni signifies a deserving opportunity for Minus the Bear.

In a time when Electro-Pop artists like MGMT, Passion Pit and Hot Chip are cashing in on a rampant popularity unlike anything skinny jean clad, thick rimmed glasses sporting nerd rockers have ever seen, Minus the Bear may have finally found their opening to the mainstream. And it has materialized through a constant vigilance to uphold what makes them unique. They have not been swept into the backwards protection of a major record label. They have not taken their pop nature to an unnatural extreme simply to pack the Williamsburg Hall of Music. They most definitely are not fabricating fake answers for fake questions direct from Rolling Stone magazine. We probably won’t be hearing a Minus the Bear track played during any Mitsubishi commercial, but I think they are approaching a period of heightened popularity that they have been working ten years for.

On “Omni”, the band does not overdo any of the components that make up their familiar sound. Minus the Bear thrives on multi-layered riffs and synth work that produces the electro pop sound, but that keeps that unappealing hipster stigma from popping into my head. The funny thing is that this growing electro pop scene sounds like Minus the Bear, not vice versa. Like in “Animal Backwards,” a song which is heavy on the synth, the electro element is not over done. In the band’s usual fashion, a comfortable balance is found between all the musical parts. I think this is a true sign of greatness. They combine modest amounts of electronic beats, clear and timely lyrics, and harmonies that compliment… without ever trying to force a dance party.

“We always wanted to see just how weird we can make a pop song,” Snider says, “but I think at some point we abandoned that and just started wanting to write really good songs.” (From MinustheBear.com)

For new listeners, I could imagine that the pop nature of Minus the Bear’s sound could be off putting. However, when given a serious listen, their musical ability and entrancing compositions are undeniable. Their songs don’t cause the imagination to digress to wealthy Los Angeles tweens wearing thin headbands, or sexually flabbergasted dudes in moccasins with Native American face paint. Instead, the band’s revamped sound on Omni will satisfy their fan base- one that is beyond classification- as well as convert new listeners through the combination of pulse pounding rock, unique electro pop, and an increased amount of ultra smooth funk.

After years of being a fan, I have noticed Minus the Bear‘s ability to progress and stay innovative in their studio production. I may skip over a few of their tracks, but the production of their songs never falters or falls backwards to a sloppy state that leaves a listener wanting more. With help from Joe Chiccarelli’s production expertise, OMNI exemplifies this. Minus the Bear has exhibited stages of authentic reinvention over this last decade, without becoming overly concerned about their popular appeal. Creatively, it feels like the band is always in control.

The vocals and instrumentation often communicate perfectly, allowing the listener to connect with both the instrumentals and the words without effort. Album after album, Jake Snider’s lyrics speak to our generation in a way that is not specific to any one social group. Many of his songs describe a compelling narrative that is almost like listening to a poetic Bukowski story- with lines often pertaining to drinking by the sea, ski homes, night life, seduction, and getting very high. Ambiguous (often erotic) themes and familiar situations epitomize many of the song’s lyrics.  I have never once questioned the resilience of Snider’s vocals. It is the driving force of the music and the kind of talent you just gotta be born with.

Let me spit some of my favorite lines from OMNI at cha:

Sauciest Songs on Minus the Bear’s OMNI: 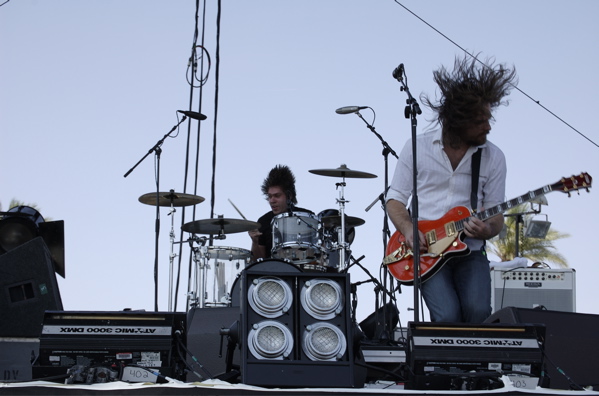 Order your CD, 2xLP, or digital copy of Minus the Bear’s OMNI here:

Ranch Report from Minus the Bear’s secret acoustic show live at Boston’s Newbury Comics (May 4th):

It was 7:00, and I had just received a call from Zola informing me that Minus the Bear was to play a free acoustic set in Boston at 7:30. After a short deliberation, I ran to the nearest T-stop and hopped a train down to the Hynes Convention Center stop. I arrived late, as the line of fans were being herded into the record shop.  I noticed that everyone in line was sporting fresh orange concert wristbands, so I asked the employee at the door how I could cop one. “We are all done giving out wristbands, sorry” the not-so-friendly dood said. I waited until all the punctual fans packed the shop, and was finally given the go ahead to fill in the back.

Newbury Comics was filled with die-hard Minus the Bear fans, at least many of the younger ones who would find out about a secret show at Newbury Comics.  The band filed out onto the shop’s makeshift stage, took a seat and grabbed their instruments. Lead singer Jake Snider held an acoustic guitar, bassist Cory Murchy held an acoustic bass, drummer Erin Tate rested a wooden drum box thing upon his lap, keyboardist Alex Rose set up one keyboard and a stylaphone (insanely cool), and guitarist Dave Knudson held a flat gray electronic instrument- the Omnichord. “Yay, the record’s out,” said Snider. “It feels good, you guys.” The band proceeded to play four songs off of OMNI acoustically. “Hold Me Down”>”Summer Angel”>”Excuses”>”My Time”.  All of the renditions had a slowed tempo, relaxed vocals and raw harmonies. A great way to kick start their Spring tour and warm Boston up for the following night’s show at The Wilbur Theatre.

Minus the Bear OMNI US Spring Tour 2010: